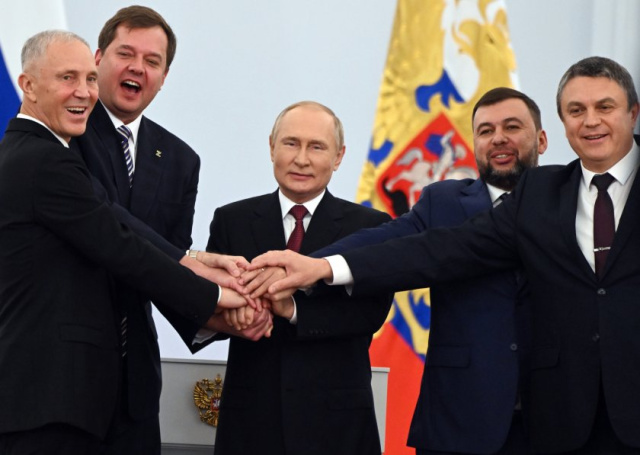 Putin and the leaders of the occupied regions

Russian President Vladimir Putin officially announced the annexation to the Russian Federation of Ukrainian territories under its control.

He declared four new subjects of the Russian Federation: the self-proclaimed Donetsk and Luhansk People's Republics, and the occupied parts of Kherson and Zaporizhzhia Oblasts in Ukraine. Referendums held under the guns of the Russian occupiers were cited as the basis for this. According to Putin, millions voted in these territories and declared their right to historical self-determination

A ceremony for signing the contracts for the entry of the new territories into the Russian Federation began at 3 p.m. in the St. George's Hall of the Kremlin Palace. As usual, Putin was about 18 minutes late.

Putin's speech was not particularly coherent, as he used the most diverse motives - from historical to conspiratorial - to justify the war against Ukraine and the slaughter of thousands of innocents. Naturally, the blame for the war in Ukraine was shifted to Kyiv and the collective West.

The main message in it was that he invited Kyiv to give up the newly annexed territories and sit down to negotiate. Putin hinted that he could use nuclear weapons, recalling that there was already precedent from the US in Hiroshima and Nagasaki.

At the start of his speech, Putin listed who fought in the geographic area called Novorussia from the Cossacks to World War II.

The USSR is past, and the past will not return, Putin said, but later praised the "determination of these people" (those who voted in the referendum) to live in their historic homeland, Russia.

In his speech, Putin accused the collective West of all kinds of things, including "turning entire nations into drug addicts," stealing Ukraine's grain, and Western leaders creating artificial hunger in the world, but he couldn't help them, even if they kept stealing Russian philosophers.

Putin also said that Russia wants to lead an "anti-colonial movement" to liberate the world. "We must turn this shameful page. The hegemony of the West will be broken. This is inevitable. We must do this for our people, for the great historical Russia."

Here are some of the most bizarre quotes from his speech:

"We call on the Kyiv regime to stop the war and return to the negotiating table. We are ready for it. But we will not discuss the status of the annexed territories".

"We will defend our lands with all the forces and means at our disposal, and we will do everything to ensure the security of our people. This is the great liberation mission of our people.”

"It was the West that trampled on the principle of inviolability of borders. And now it decides at its own discretion who has the right to self-determination and who does not. Why do they decide like that? Who gave them that right?”

“The United States is the only country in the world that used nuclear weapons against civilian cities, destroying Hiroshima and Nagasaki. By the way, they set a precedent.”

"Sanctions were not enough for the Anglo-Saxons, they turned to sabotage. Unbelievable, but true. By organizing the blowing up of the Nord Stream gas pipeline, they actually began to destroy the pan-European energy infrastructure. It is clear to everyone who benefits from this. The one who wins is the one who did it.”

"They lie like Goebbels. The more unbelievable the lie, the faster people will believe it.”