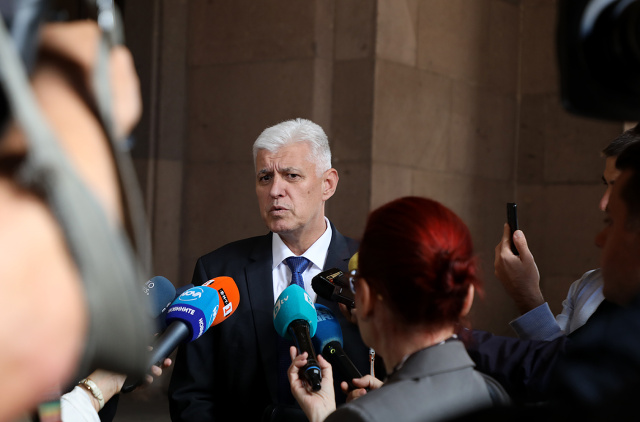 “The question of providing a specific type of weaponry to Ukraine was raised again. My answer was short and clear - there is a decision of the parliament, we cannot trample on it." This was commented by the Caretaker Minister of Defense Dimitar Stoyanov in response to a question whether the Ukrainian ambassador in Sofia, with whom he met, raised again the question of Bulgaria providing arms to Ukraine.

Asked before his entry into the Security Council at the Council of Ministers exactly what kind of weaponry was in question, Stoyanov noted that he did not think it was necessary to share, but that it was "heavy weaponry, not small arms, nor ammunition."

When asked if Ukraine had requested Su-25 aircraft, he emphasized: "I said a long time ago, and Ambassador Moskalenko (Ukraine's ambassador Vitalii Moskalenko) knows very well my position that heavy weapons while I am a minister cannot be given, and until there is no change in the position of the Parliament."

He commented on the situation in Russia and the ongoing mobilization of reservists there. "There is a risk that Bulgarians with dual citizenship in Russia will be mobilized. These people are subject to mobilization. I am talking about citizens who are in Russia and have Bulgarian and Russian citizenship," he pointed out, repeating the position of the Ministry of Foreign Affairs.

There are no direct threats to national security from involving Bulgaria in a conflict, Stoyanov assured again.

"Any change in the geopolitical situation leads to corresponding concerns. The turn in the war in Ukraine, if there is one at all, will come from mobilization. But it is very important how many people will be mobilized. If they are 300,000, I do not expect any significant twist. If there are more, then things may change," Dimitar Stoyanov also commented.

According to him, the main risk in the Black Sea remains only free-drifting mines. "Communications are open. But you know that several mines were discovered and detonated, which is the main risk at the moment," added the Acting Minister of Defense.