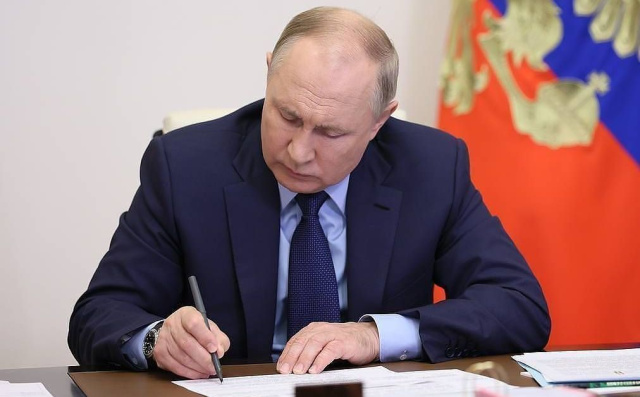 Vladimir Putin will sign "agreements on the accession" of new territories to Russia on September 30, Kremlin spokesman Dmitry Peskov said.

This will take place at 3:00 p.m. in the solemn St. George's Hall in Moscow, and the deputies from the lower house of the parliament are invited to the ceremony.

"There will be a voluminous speech," added Peskov.

After that, there will be a big rally concert in the center of Moscow.

Meetings of the State Duma and the Federation Council are scheduled for the beginning of next week, at which the documents signed by Putin and the "leaders" of the so-called Donetsk and Luhansk People's Republics, as well as the Moscow-installed wartime leaders of the occupied parts of Kherson and Zaporizhzhia regions, will almost certainly be ratified

No one in the world recognizes the "referendums" hastily organized from September 23 to 27, and Putin did not even try to imitate at least the parameters of the unrecognized "referendum" of 2014, with which he annexed Crimea.

On February 21 - a few days before sending the army to Ukraine, Putin announced that he recognized the DPR and LPR as independent states, but the military-civilian administration of the then-occupied territories from southern Ukraine had not yet declared "independence" and had no legal rules how this is done.

So it is not known exactly what Putin will "annex".

According to the law "On acceptance into the Russian Federation", Russia must first recognize the Kherson and Zaporizhzhia regions as independent states and clearly indicate the exact borders, since not everything there is occupied.

The president then signs interstate treaties, the legality of which must be ruled on by the Constitutional Court of Russia (ed. - this week one of the constitutional judges resigned without reason and the comments are that he probably doesn't want his name to stand under approval of the seizure of foreign territory, although in 2014 he agreed to the annexation of Crimea).

Next comes the discussion and voting on them in the parliament.

Finally, the approved agreements are signed by Putin.

More news regarding the war in Ukraine from its 218th day read here.