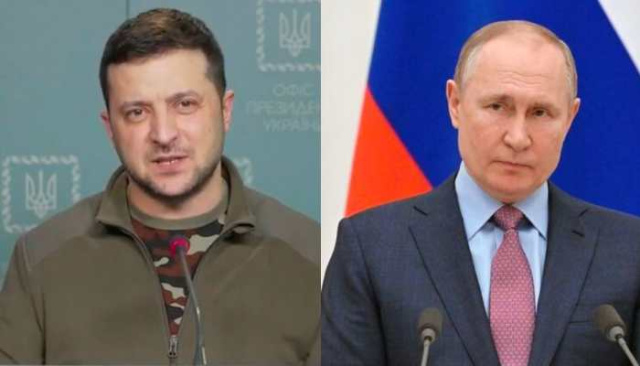 "Welcome home to Russia". The pseudo-referendums - with 90 to 100% support

The Deputy Chairman of the Security Council of Russia Dmitry Medvedev commented on the results of the referendums organized in the four Ukrainian regions that are under Russian control. At them, residents of the self-proclaimed Donetsk and Luhansk People's Republics and parts of Zaporizhzhia and Kherson Oblasts captured by Russia were asked whether they wanted to join the Russian Federation.

"The results are obvious. Welcome home, to Russia!", he wrote yesterday on his Telegram channel, TASS reported, quoted by BTA.

The plebiscites, rejected by Kyiv, Washington and the EU as fictitious and illegal, took place on September 23 and 27. The authorities of the Russian-controlled areas announced that 87 percent to 99 percent of those who participated in the vote voted for entry into Russia.

Russian officials said that the results of the illegal, according to international law, referendums organized in four Ukrainian regions showed unanimous support of those who voted for the accession of these territories to Russia, DPA reported.

According to the occupation administration, after counting the votes for entering Russia in the self-proclaimed Donetsk People's Republic, 99 percent voted, in the Luhansk People's Republic - 98 percent. In Zaporizhzhia, more than 93 percent said they wanted to become part of Russia, and in the Kherson region, over 87 percent.

Volodin: “By joining the territories, we will save millions from genocide”

The Speaker of the State Duma made a call this morning on his Telegram profile for the territories to join Russia.

"A decision was made to save millions of people from genocide. An opportunity opens up for US TOGETHER to build the plans for the future".

The unprecedented annexation of these territories is likely to begin in the coming days. It is expected that the next step will be for the Moscow-appointed occupation administrations to formally request Russian President Vladimir Putin to be accepted into the Russian Federation. The Kremlin has made it clear that this could happen quickly.

Ukraine and many countries around the world have said that the pseudo-referendums in the four partially occupied Ukrainian regions are illegal.

Canada will impose new sanctions on Russia because of the "pseudo-referendums" in four occupied regions of Ukraine, Canadian Prime Minister Justin Trudeau said, quoted by Reuters. Canada will never recognize the results of the referendums or Russia's attempt to illegally annex Ukrainian territories, the Prime Minister noted.

After five days of voting, Russian-appointed officials in the four occupied regions of Ukraine announced yesterday that the vast majority of voters supported joining Russia

Von der Leyen: The Nord Stream leaks are an act of sabotage

The President of the European Commission, Ursula von der Leyen, stated that the leakage of gas from the Nord Stream gas pipeline into the Baltic Sea was an "act of sabotage", BTA reported.

On Twitter, she wrote that the deliberate destruction of European energy infrastructure is unacceptable:

"It is extremely important to investigate the incidents and get to the bottom of the events and their causes. Any disruption to active European energy infrastructure is unacceptable and will receive the strongest possible response," Von der Leyen said.

Earlier, the prime ministers of Denmark and Sweden, Mette Frederiksen and Magdalena Andersson, said the leaks were caused deliberately.

The company, the operator of Nord Stream 1, informed that they will activate all the necessary resources, but warned that at the moment it is not possible to say exactly when the gas pipeline will be restored.

Even weeks ago, the CIA warned Germany about possible attacks on gas pipelines in the Baltic Sea, reports the German magazine "Spiegel" in connection with the gas leaks of "Nord Stream" 1 and "Nord Stream 2".

Leaks from the Nord Stream pipeline near a Danish island in the Baltic Sea are due to sabotage, Danish Prime Minister Mette Frederiksen has said.

"The conclusion of the authorities is that these are deliberate actions. It is not an accident," she said at a press conference.

Copenhagen expects leaks from the decommissioned but gas-filled pipelines to continue for "at least a week" - until the methane leaking from the underwater pipes runs out, Energy and Climate Minister Dan Jorgensen said.

"We still have no information about the persons responsible," Frederiksen added.

The Nord Stream 1 and Nord Stream 2 pipelines have been at the center of geopolitical tensions in recent months as Russia cut gas supplies to Europe in alleged retaliation against Western sanctions following its invasion of Ukraine.

Although the pipelines - operated by a consortium majority-owned by Russian gas giant Gazprom - are currently down, both still contain gas.

Zelensky called for Russia to be excluded from all international organizations

Ukrainian President Volodymyr Zelensky called for Russia to be stripped of its membership in the Security Council and excluded from all international organizations.

In a video address to the UN Security Council meeting on Ukraine, Zelensky called for tough new global sanctions against Russia and demanded clear and legally binding guarantees for collective security.

He said that in front of the eyes of the whole world, Russia is conducting an "outright farce" called a referendum in the territories it occupies, and "forcing people to fill out some papers at gunpoint" as long as there is television footage, the Ukrainian agency UNIAN reported. Zelensky stressed that if Ukrainian lands are annexed, there will be no negotiations with Russian President Vladimir Putin.

The Ukrainian leader called for additional military and financial aid for Ukraine so that it can defend itself and "the aggressor loses".

The extraordinary meeting of the Security Council was called because of the referendums organized under the dictates of Moscow in the Ukrainian territories occupied by it and in the two self-proclaimed republics - Donetsk and Luhansk. Late last night, their authorities announced that the residents had voted to join these territories with Russia. It is believed that this will be used by Russia as a pretext to announce that it is annexing these areas, as it did with Crimea in 2014.

The Ukrainian leader accused Russia of destroying the United Nations as the main body of international law and said that it should be excluded from all international organizations, and if such exclusion is procedurally difficult, its participation in them should be frozen.

Many members of the UN Security Council condemned the referendums and stressed that the territories annexed by Russia would never be recognized.

Putin is planning a new offensive, he wants to capture Kharkiv and Odesa, writes Bloomberg

Russian President Vladimir Putin has not given up on plans to seize Ukraine, Bloomberg reports today, citing sources close to the Kremlin.

They believe that after announcing mobilization, he hopes to regain the initiative on the battlefield, move deep into Ukraine and capture several major cities, including Kharkiv and Odesa.

Recently, in a surprise offensive, the Ukrainian armed forces liberated most of the northeastern Kharkiv region, putting Russia's elite First Guards Tank Army on the run and capturing much of its equipment, which it left behind.

The Russian leader intended to leave Ukraine with only part of its pre-war territory, Bloomberg's sources said on condition of anonymity.

Putin's entourage still believes they can turn the war around and force negotiations to consolidate military gains.

Bloomberg comments that it is unlikely that 300,000 untrained and poorly motivated soldiers from the first wave of mobilization will achieve such a turnaround. It is more likely that they will only delay the Ukrainian counteroffensive, military analysts told the agency.

On Friday, Putin is expected to address the Federal Assembly and then sign the annexation of the territories in the four Ukrainian regions, where the so-called "referendums" on joining Russia, writes Bloomberg.

Ukraine can count on the support of the new Italian government, said in a message to President Volodymyr Zelensky Giorgia Meloni, whose far-right Italian Brothers party won the largest percentage of the vote on Sunday, AFP reported.

"You know you can count on our loyal support for the cause of freedom of the Ukrainian people. Be strong and keep your faith steadfast," Meloni tweeted in response to Zelensky's congratulations on her victory.

"We appreciate Italy's unwavering support for Ukraine in the fight against Russian aggression and count on a productive partnership with the new Italian government," he wrote in Italian.

Outgoing Italian Prime Minister Mario Draghi was one of the strongest supporters of EU sanctions against Russia over the war in Ukraine, despite his country's dependence on Russian gas.