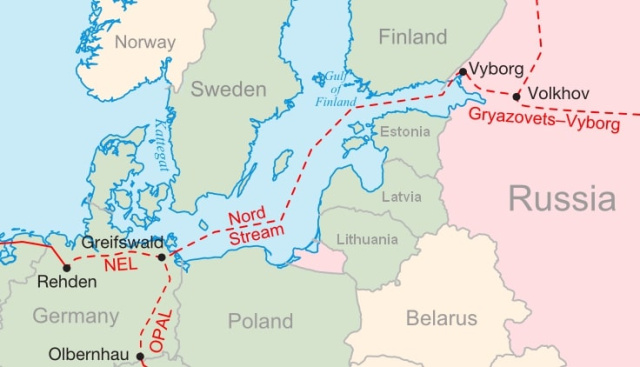 Swedish maritime authorities said on Tuesday they had issued a warning about two leaks from Russia's Nord Stream 1 gas pipeline in Swedish and Danish waters. The warning is a fact, shortly after a leak was also discovered from the nearby "frozen" Nord Stream 2 project.

The leaks were located northeast of the Danish island of Bornholm, the spokesman said, adding that it was unclear what caused the natural gas leak.

"We are monitoring further to ensure that no ships come too close to the site," said a second SMA spokesman.

On Monday, Danish authorities asked ships to move away from a radius of five nautical miles southeast of Bornholm, after gas leaked into the Baltic Sea from the malfunctioning Nord Stream 2 pipeline.

Nord Stream AG's statement said it was impossible to estimate when the gas network would be restored.

It should be noted that later today the "Baltic pipeline" - a new undersea gas pipeline delivering Norwegian gas to Poland, which has an annual capacity of 10 billion cubic meters per day - is due to be officially opened.

Meanwhile, Denmark's energy ministry has decided to put the energy sector on alert after announcing a total of three gas leaks on the Nord Stream 1 and Nord Stream 2 pipelines.

"Based on the incidents, the Danish Energy Agency recommended that Energinet (the Danish national transmission system operator for electricity and natural gas) increase the level of sectoral preparedness in both the electricity and gas sectors," the ministry said in a statement, adding that this means companies in this area will have to implement "concrete measures" to improve safety.

However, the ministry stressed that "none of yesterday's incidents are currently relevant to gas supplies to Europe and Denmark, as none of the pipelines are in operation".

Earlier today, German daily Der Tagesspiegel reported, citing its sources, that the leakage of gas from the two pipelines may have been the result of sabotage rather than coincidence.