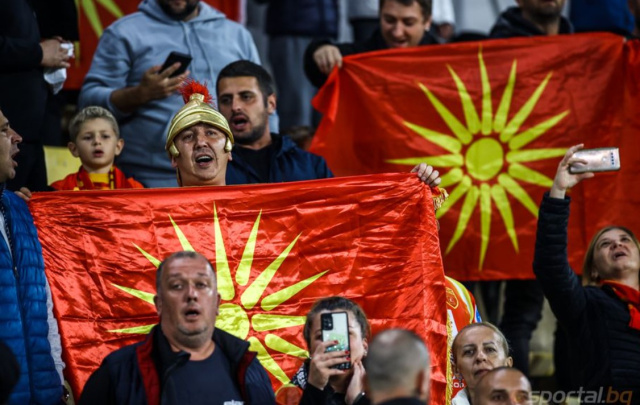 Bulgaria defeated North Macedonia 1:0 in a hotly contested League of Nations football match. Kiril Despodov brought success to the "lions" with a goal in the 50th minute after an assist from Radoslav Kirilov. The match of "Tose Proeski" Arena in Skopje was played with scandalous behavior on the part of the audience of the hosts, who first loudly booed the national anthem of Bulgaria, and then did not stop insulting the Bulgarians with various ugly epithets. Our victory was of an important nature regarding the upcoming draw for the Euro 2024 qualifiers in Germany and the distribution of the teams in the urns for it.

The performance of Bulgaria's national anthem was drowned out by boos from North Macedonia fans. It happened minutes before the start of the match. The same thing happened with the names of all the Bulgarian nationals during their introduction by the announcer.

Among the chants of the North Macedonians were words such as "Bulgarian-Tatars", "Bulgarian mother****rs" and "Gypsies".

Bulgaria coach Mladen Krstajic made three changes compared to the previous match, which was his debut in charge of the tricolors - the 5:1 victory over Gibraltar. CSKA 1948 guard Daniel Naumov stood at our goal post again. Viktor Popov, Plamen Galabov, Valentin Antov and Anton Nedyalkov, who returned to the position of left back, played in front of him. Viktor Popov took the place of Ivan Turitsov, and Galabov took the place of Petko Hristov.

In the middle, Krstajic again bet on Iliya Gruev, Iliyan Stefanov and Levski attacking player Marin Petkov. Absent from the match was Filip Krastev, who was replaced by his former Slavia teammate Yanis Karabelov. The forward attack was again led by Kiril Despodov and Radoslav Kirilov. 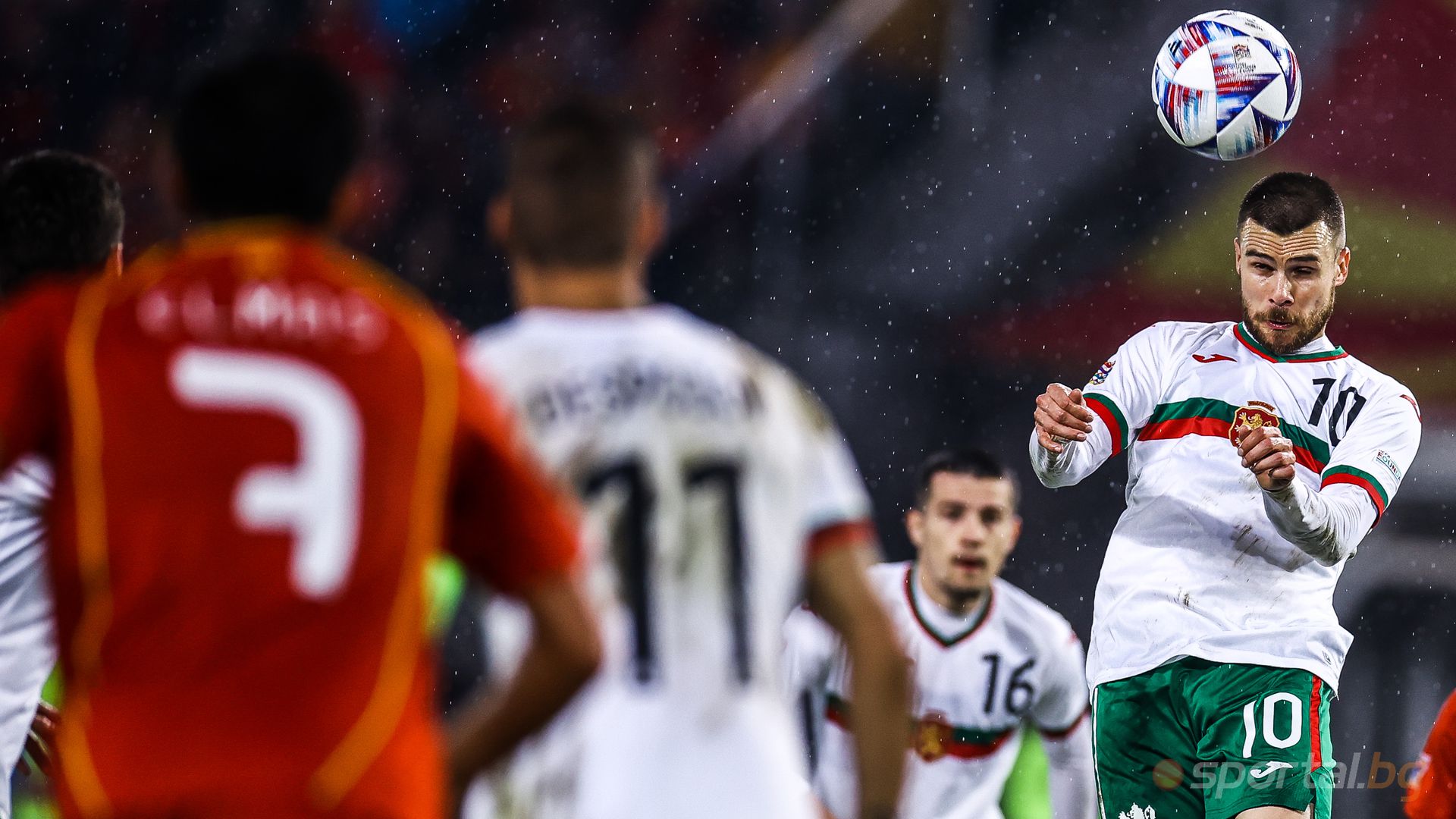 The match started nervously, without serious situations in front of both goals, and the insulting chants from the stands directed at our players continued. In the 15th minute Todor Todoroski came in very roughly with his boots on the knee of Marin Petkov and the Austrian referee Julian Weinberger correctly showed the Macedonian left-back a red card, the situation was confirmed by VAR.

Shortly after, the coach of North Macedonia, Blagoja Milevski, received a yellow card for protesting against another referee's decision, which "gave birth" to more ugly chants against the Bulgarians and shouts of "UEFA mafia".

In the 28th minute, our boys created the first danger in front of the goalpost of the North Macedonians, but Kiril Despodov missed the opportunity to punish the home goalkeeper from close range. 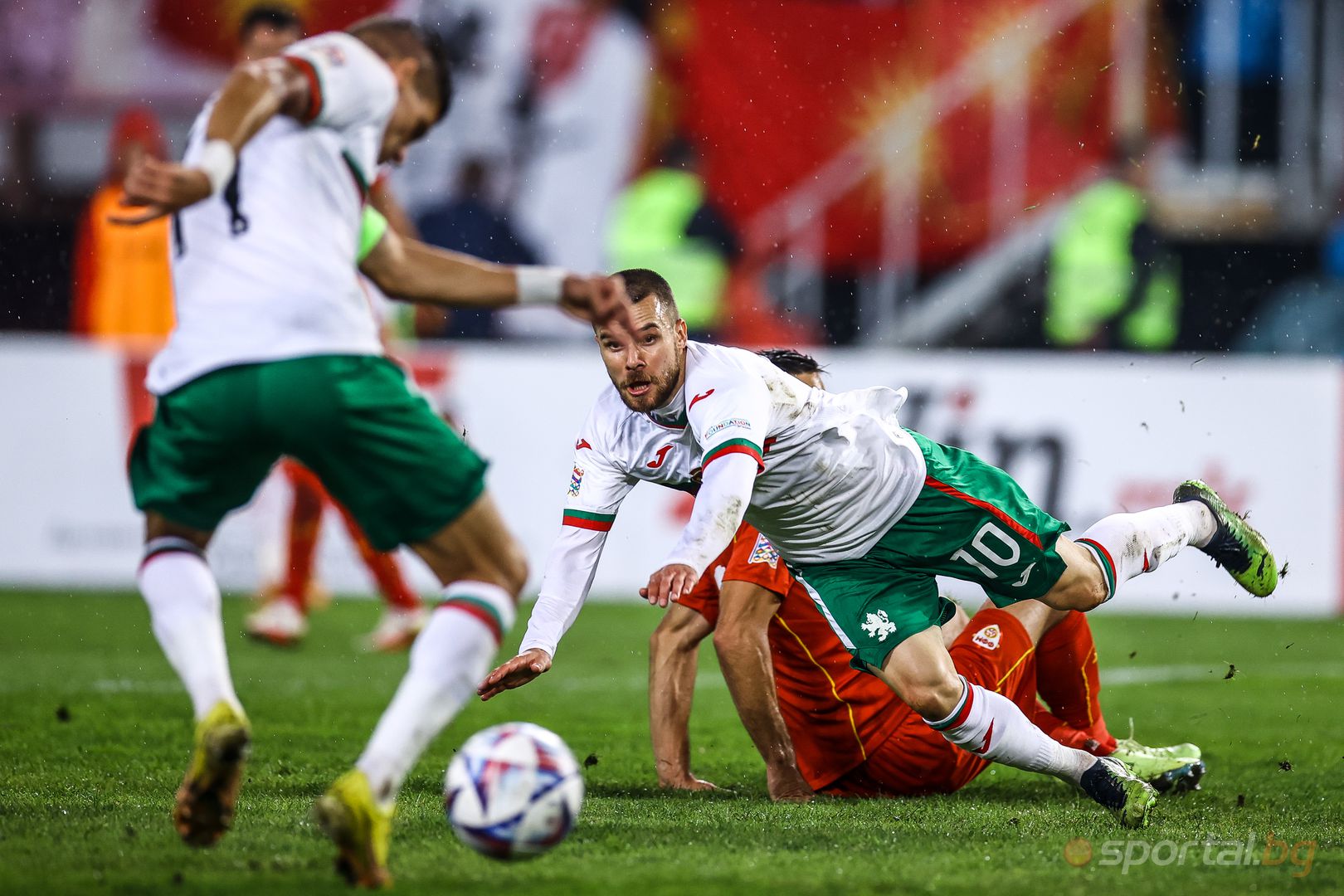 In the 25th minute, the home team's central striker Milan Ristovski shot dangerously towards the Bulgarian goal, but Daniel Naumov reacted well and managed to knock the ball into the corner.

At the beginning of the second half, Bulgaria took the lead! It happened in the 50th minute when Radoslav Kirilov found Kiril Despodov in a good position. The captain of the "lions" controlled and shot through the guard of North Macedonia Stole Dimitrievski - 1:0 for Bulgaria! Despodov and the rest of our team expressed their joy loudly in front of the local fans, under the boos of the rest of "Tose Proeski". In the 59th minute, our team almost scored a second goal. Anton Nedyalkov found the ball with his head after a cross from a corner kick, but the home defender cleared from the goal line. Shortly afterwards, however, the same situation was repeated in front of the Bulgarian goal, and this time Valentin Antov was the last barrier in front of the goal. In the 64th minute, the North Macedonians missed another opportunity - two meters in front of Naumov's goal post.

In the 82nd minute, the winger Ezgjan Alioski found himself in a shooting position in front of our goalkeeper's field, but his shot went wide of the target. After 180 seconds, Nedyalkov found Despodov with a long pass, who in turn passed to Kirilov, but the CSKA 1948 striker's shot was blocked by a home defender. In the 88th minute, a melee broke out on the pitch after a football player of the home team provoked Radi Kirilov, who collided with him. The game was stopped for about half a minute, and the referee showed yellow cards to Bardi and Kirilov. Thus, the final whistle heralded the Bulgarian victory.

Boyko Borisov: With such actions, our neighbors from North Macedonia do not show that they understand European values

Former Prime Minister Boyko Borissov condemned the boos of the Bulgarian national anthem in Skopje. Borissov used his personal profile on "Facebook" to support our national football team in the match with North Macedonia from the League of Nations.

"Respect to the boys from the Bulgarian national football team! This is how the dignity of our nation is defended! As a Bulgarian and a football fan, I categorically condemn the insulting of the Bulgarian national anthem at the beginning of the match Bulgaria - RNM. Unfortunately, with similar actions, our neighbors from North Macedonia do not show that they understand European values. Forward, Bulgarian heroes!"