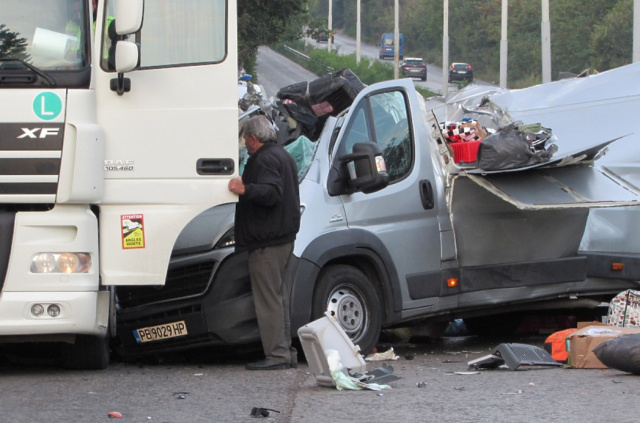 A twenty-six-year-old driver without a license died in an accident near the Ruse village of Semerdzhievo. This is reported by BTA, citing the regional spokesperson of the Ministry of Internal Affairs in Ruse, Daniela Malcheva.

The call was made shortly after 7 a.m. this morning. The man was driving a foreign car when he drove off the road and crashed into a tree. Due to the serious accident, the road is closed. Police and emergency teams immediately arrived at the scene.

Unfortunately, there was a second victim in the same region just last night. At 4:10 a.m., it was reported that a bus with Bulgarian registration, in which two men and a woman were traveling, was traveling from Ruse to the village of Marten, when it collided with a stopped heavy truck with Turkish registration.

Police and emergency teams immediately arrived at the scene. The woman in the bus died in the impact. The driver was taken to hospital with a head injury.

The accident happened near the Danube Bridge. The main road between Ruse and Silistra is closed.

A woman died and three people were injured after a freak accident in Vidin region, reports "Darik News" based on data from the police. On September 25, at 9:50 p.m., an accident report was received in the village of Topolovets, Ruzhintsi municipality - on the main road in the direction of the village of Dabova Mahala.

A car hit the tractor moving in front of it. As a result of the impact, the car left the roadway and overturned on its roof by the side of the road.

Four people were traveling in the vehicle. A 36-year-old woman died on the spot. The other three were hospitalized in Montana with non-life-threatening injuries. It is under investigation who was driving the car.

A bus carrying children crashed in Montana. The school bus hit a tree on the road between the Montana villages of Doctor Yosifovo and Studeno Buche. Two children who were traveling to their school in Montana were injured in the accident.

They are 17 and 18 years old. One has a fracture of one leg, and the other - with severe facial and craniocerebral trauma.

The incident was reported shortly after 7 a.m. Monday morning. The impact has caused a huge traffic jam in the area.

Four people died and 28 were injured in 20 serious accidents in the country during the past 24 hours, according to the statistics of the Ministry of the Interior.

One person died in Sofia. Six people were injured in five serious and 15 minor accidents in the capital.

Since the beginning of September, there have been 493 serious accidents in the country, in which 32 people died and 633 were injured.

At the same time, Sofia is waiting for the results of the blood tests of Dimitar Lubenov (39), who killed a French citizen and injured others on the Ring Road on the night of Sunday. He drove his Porsche at about 200 km/h.

The man was heard on the phone commenting after the accident that "the Panamera is on the chopping block" - mainly concerned about his Porsche.

But the killer is at least a "patriot" because he told one of the eyewitnesses:

"Why are you so worried about foreigners - are you Bulgarian?!"

Ljubenov has dozens of receipts and unpaid speeding fines worth over BGN 1,900. The man has been charged and currently remains in custody for 72 hours.