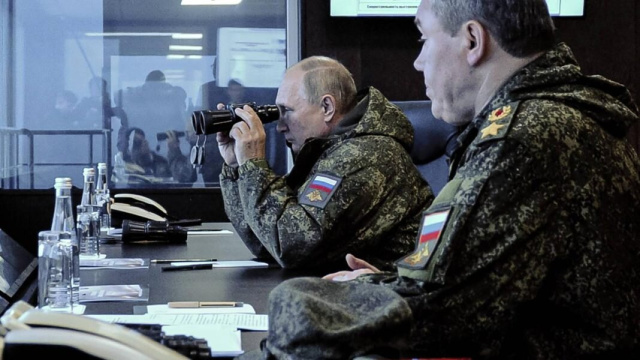 The United States will respond "decisively" if Russia resorts to nuclear weapons in Ukraine, and the consequences for the Russian Federation will be "catastrophic," National Security Adviser Jake Sullivan said.

In his statement to NBC, Sullivan did not specify what Washington's response would be, but noted that Moscow had been informed in greater detail what the consequences of a nuclear escalation would be.

The United States is convinced that Russian President Vladimir Putin wants to "wipe out" the Ukrainian people, and for that reason, Washington will continue to provide Ukrainian leaders with weapons, ammunition, intelligence and any other assistance, Jake Sullivan said.

US Secretary of State Antony Blinken also said his country had a clear plan of action if Russia resorted to using nuclear weapons in Ukraine. Blinken did not reveal details of the plan, but stressed that Washington had made it clear to Moscow that the consequences of the move would be "terrible".

Blinken also indicated that Washington is in communication with Moscow about the risk of the conflict in Ukraine escalating into a nuclear war. He told CBS News that the U.S. is making it clear that "the consequences would be horrific."

Antony Blinken believes Russian President Vladimir Putin has already lost the war in Ukraine "in terms of what he was trying to achieve", given that his original aim was "to erase Ukraine's identity as an independent state".

He noted that Russia "has not demonstrated any willingness at this time to engage in meaningful discussions" and that there are currently no peace talks with the United States.

This week, the European Commission will present its proposals for additional sanctions against the Russian Federation. In addition to a ban on the import of Russian diamonds, further restrictions on trade in oil and high technology are being discussed in Brussels.

Yesterday, in his statement to the UN General Assembly, Russian Prime Minister Sergey Lavrov accused the West of "grotesque Russophobia" and of wanting to "split and destroy" Russia. According to Lavrov, the United States wants to turn the whole world into its "backyard", and the European Union has become an "authoritarian, dictatorial entity".

At a press conference later, Lavrov confirmed Moscow's intention to annex the occupied territories, where referendums are being held to join the Russian Federation. Asked whether the Kremlin would use nuclear weapons to defend these lands, the Russian foreign minister replied:

The two countries with the largest populations - China and India – declared, during the debates in the UN General Assembly, for a faster diplomatic solution to the Ukrainian crisis. Chinese Foreign Minister Wang Yi appealed to both Ukraine and Russia to prevent the crisis from spreading and affecting the developing world.

"China supports all efforts for a peaceful settlement of the Ukrainian crisis. The urgent priority dictates that we convene peace talks, the solution lies in addressing the legitimate security concerns of all parties and building a balanced, effective and sustainable security structure."

"As the conflict in Ukraine continues to rage, we are often asked whose side we are on. India is on the side of Peace and will remain firmly on that position. We are on the side that respects the UN Charter and its fundamental principles. We are on the side, which calls for dialogue and diplomacy as the only way out of the crisis. We stand with those trying to make ends meet while food and fuel prices rise. It is therefore in our collective interest to work constructively both at the United Nations and beyond their frameworks, in order to reach a faster solution to this conflict".

Zelensky: The nuclear threat is real

Ukrainian President Volodymyr Zelensky has warned that nuclear war "could become a reality".

"Look, maybe yesterday it was a bluff," added Zelensky. “Now this may be a reality. Putin is occupying our nuclear power plant in the city of Energodar as well. This nuclear power plant has six units. And ... he continues his blackmail related to our export of electricity to Europe.”

"I don't think he's bluffing," the Ukrainian president continued. "I think the world is deterring him and limiting this threat." We must continue to put pressure on him and not allow him to prolong the war."

Zelensky's comments come after he promised to deal with surrendering Russian troops in a "civilized manner". In turn, Putin signed a bill passed by the Russian parliament last week that would make any soldier who deserts, voluntarily surrenders or disobeys an order, to face up to 10 years in prison.

Voter turnout in the referendum in the Donetsk People's Republic exceeded 50% and it can be considered valid, Alexander Kofman, head of the Public Chamber of the Republic, told TASS at a briefing in the Central Election Commission of the region.

"According to international norms, a referendum is considered valid if 50% plus one voter voted in it. According to yesterday's results, this milestone has been reached," said Kofman.

“The referendum on the accession of the Luhansk People's Republic to the Russian Federation was recognized as valid, as more than 50% of voters voted in it”, the head of the Central Election Commission (CEC) Elena Kravchenko said in an interview.

"On the entire territory of the Luhansk People's Republic, there is a high voter turnout. On the third day of voting, more than 50% of the participants in the referendum took part. Thus, the referendum is considered valid," said Kravchenko.

As of September 23, 1,360,768 participants in the referendum in the LPR were included in the voter lists. The CEC noted that the voter turnout at the end of the third day was 76.09%.

"At the end of today /September 25, 2022/, voter turnout in the republic was 76.09%, and this is the third day of voting. According to the voter lists, 1 million 35,422 ballots were received in the republic," said the head of the CEC of the republic.

According to Kravchenko, Luhansk, Antratsyt and Krasnodon were leaders in terms of voter turnout. "The liberated territories are not far behind either, they also have good indicators," she noted. The head of the CEC added that all commissions will start work on Monday. It is noted that more than 85 thousand citizens of the LPR voted in the referendum for the accession of the republic to Russia in the polling stations on the territory of the Russian Federation. "For today, September 25, 85,916 residents of the Luhansk People's Republic, who are located on the territory of the Russian Federation, voted," Kravchenko said.

“Negotiations with Russia will become impossible after the referendums in the DPR and LPR, as well as in the Kherson and Zaporizhzhia regions”, said the President of Ukraine, Volodymyr Zelensky.

"The Russian government can officially announce that the referendum is over and the results will be announced. This will make it impossible to continue diplomatic negotiations with the president of the Russian Federation," Zelensky said in an interview with the American television channel CBS.

He also again called on the US to help Ukraine. According to him, Washington is currently giving Kyiv 1.5 billion dollars a month "to support the budget".

261 thousand men have left Russia since the announcement of "partial" mobilization. The FSB reported this to the president, claims Novaya Gazeta Europe, citing a source from the presidential administration.

Already on Wednesday, as figures from the security forces began to come in on the number of men leaving Russia, discussions began in the presidential administration about closing the borders to men of "military age". In the latest FSB report from September 25, the number 261 thousand appears, which is the number of people who left the country from Wednesday to Saturday.

The source of Novaya Gazeta Europe in the presidential administration doubts the reliability of the FSB data because so far the border service of the FSB "has not worked so quickly". In the spring, the services relied more on the data received from the data of the mobile operators, but it came late.

However, the source said, “the atmosphere in the president's administration is such that the security forces and the Ministry of Defense will be able to convince Putin to close the exit before it is too late.”

The publication notes that leaders in the presidential administration do not have meetings with the president for the second half of September. "At the beginning of the month, they met several times a week." - explains the interlocutor of Novaya Gazeta Europe, commenting on the messages of the journalist Farida Rustamova. A day earlier, citing three sources, she said that after the mobilization was announced, Vladimir Putin went on vacation to Valdai for a week.

The presidential administration has not yet seen the draft decree of the head of state to close the border, but according to information in the Russian media, the restrictions are expected to come into force as early as Wednesday. In the meantime, at least five cases of border stops of citizens who were not mobilized but meet the criteria for mobilization are already known. They were informed at the border crossing that they were prohibited from leaving the country based on a decision of the military district.

The first, albeit unofficial, announcement of already existing restrictions on leaving the country came from a briefing by the military commissar of the Rostov region, Igor Egorov, who said that there was no ban on travel abroad, but that those who wished to travel must first obtain permission from the military district.

Today it also became known that some citizens who fall under the criteria of "partial" mobilization and are trying to leave Russia have started issuing notices at the borders, according to which they are forbidden to leave based on a decision of the military commissariat. At least five such cases have already been registered.