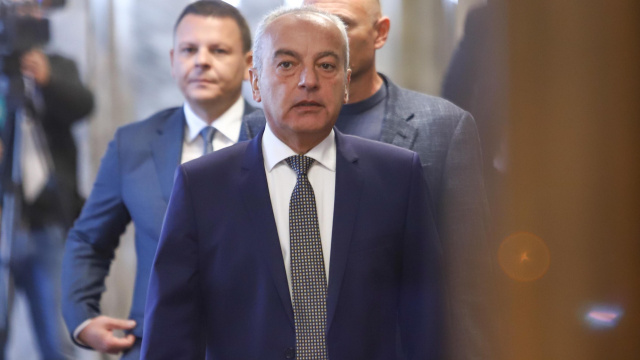 “I will convene the Security Council to the Prime Minister next week, I guess on Thursday so that we can take concrete decisions and measures and be ready to react.”

"The announced partial mobilization by the president of the Russian Federation leads to an escalation of tensions and to the fact that the countries in Europe and those that are close to the conflict between Russia and Ukraine do not have certainty about how long the military actions will continue and with what intensity they will be. Such an action by Russia is unacceptable, especially since it is a permanent member of the UN Security Council and should strictly observe the UN Charter and not threaten any other country with military force, which is a direct violation of the Statute of the Organization", he said and emphasized again that there is a risk to Bulgaria's national security, but "there is no direct military threat to our country so far".

In his words, the uncertainty also comes from the disruption of energy supply chains for Europe by Russia:

"The gas issue is one of the leading ones in the EU and raises many questions about how Europe and its citizens will face the coming winter months".

For BNR, the acting Prime Minister categorically emphasized that Bulgaria will not recognize the results of the referendums that are being held in the four regions of Ukraine:

"These referendums violate international law, they also violate the Constitution of Ukraine. We cannot under any circumstances accept results achieved in regions where hostilities are taking place. I am also completely opposed to intimidation with the use of nuclear weapons, no matter of the deterrent effect".

Galab Donev stated that Bulgaria supports EU sanctions against Russia to continue, but:

"The EU must do its analysis so that the sanctions do not have retroactive effect on the countries of the European Union. All the sanctions that the EU is yet to discuss in order to impose, we will insist that they go through a thorough analysis to see all the pros and cons of them".

According to him, the caretaker government has not slowed down with its position regarding Russia:

"There should be no hasty actions when we are in conditions of military operations, which are taking place in close proximity to the borders of Bulgaria".

Our positions are in sync with our partners in the EU and NATO, he pointed out categorically and specified:

"We firmly state that we do not support Russia's military actions in Ukraine. We are in favor of preserving the territorial integrity and sovereignty of Ukraine, that it has the right to free development, democratic development, as chosen by the Ukrainian citizens. We are firmly against the war and we have always insisted that solutions be sought through diplomacy".

On the occasion of the wave of citizens leaving Russia, Donev said:

"This is more of a hypothesis for Bulgaria than a real fact. There must be a unified EU response to an intensified wave of refugees from Russia. No country could handle such a problem alone."

There is no refusal to negotiate with Gazprom, said the caretaker prime minister:

According to him, the demand for penalties for breaching the gas supply contract is a commercial relationship and should be resolved between the two companies - between "Bulgargaz" and "Gazpromexport".

There is great interest in the announced tenders for the supply of liquefied gas, the acting Prime Minister announced and added:

"At the moment, I have no information about Gazprom participating in the tender. There are quite a few companies that are interested. At the beginning of October, the tender for the November delivery will end."

In October, Bulgaria will participate in the tender for the Revithoussa terminal in order to secure slots and capacities for regasification and gas storage, Galab Donev also emphasized and announced that the Interconnector with Greece will enter commercial operation from October 1.

"Bulgargaz" will also announce a contract for the gas hub "Balkan" and for the supply of pipeline gas. “We are looking for full diversification to provide competitive prices to businesses and citizens. In March, the tender will end and the conclusion of a long-term contract will be made by a regular government,” said the caretaker prime minister.