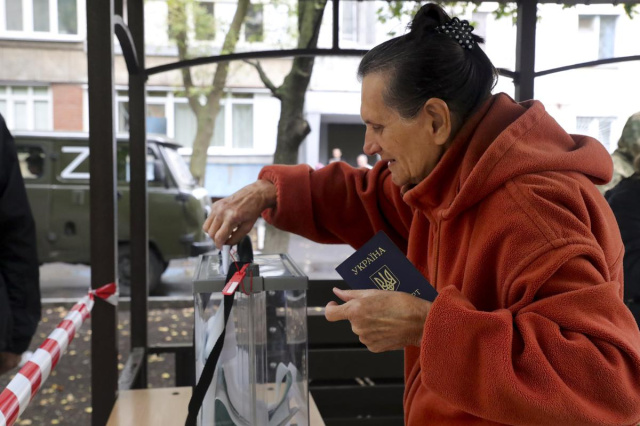 Referendums on joining Russia, which are being held in 4 Ukrainian regions, continue for a second day.

According to residents of the Zaporizhzhia region, Russian soldiers go door-to-door and invite residents to verbally answer the question of whether they want to be part of the Russian Federation.

Answers are recorded in lists. According to Russian state media, this type of vote is for security purposes. A French TV crew filmed how during such a home visit, instead of the granddaughter, her grandmother voted. The sectional committee explains that the girls who work are young and inexperienced, but they promise to cancel the vote.

The referendums were organized in a very short time, observers remind. In Donetsk and Luhansk regions, the question on Russian-only ballots is whether the self-proclaimed republics should join Russia. In the Zaporizhzhia and Kherson regions, the election papers are in Russian and Ukrainian, there the question is whether they should secede from Ukraine, become independent subjects, then join the Russian Federation.

Polling in the four districts continues until September 27.

The West and Kyiv condemned the holding of the referendums, which are seen as a step towards annexing these territories to Russia, and said they would not recognize the result.

"If Moscow annexes Ukrainian territories, our response will be swift and harsh," US President Joe Biden said.

And in his midnight address, President Volodymyr Zelensky called on the Ukrainians who are in the occupied territories to resist in any way the mobilization and their involvement in hostilities:

"The world will react appropriately to these pseudo-referendums - they will be condemned unequivocally. As well as the illegal mobilization that the occupiers are trying to carry out in Crimea and in other parts of Ukraine that they temporarily control. These are not only crimes against international law and Ukrainian law. These are crimes against specific people, against a people."

Referendum at gunpoint: Russians banned leaving the occupied territories, threatened with firing people from their jobs

Today is the second day of referendums in the occupied Ukrainian territories. The local population is prohibited from leaving their location until the end of the four-day vote, Reuters reported, citing Ukrainian officials. They testify that armed men entered the homes to "call" for voting, and there were also threats of dismissal from work in case of refusal.

The provinces of Luhansk, Donetsk, Kherson and Zaporizhzhia in the east and southeast, which represent about 15% of the territory of Ukraine, voting in them, according to the previously announced plan of Russia, should take place from Friday to Tuesday.

"Today, the best thing for the people of Kherson would be not to open their doors," commented Yury Sobolevsky, the replaced First Deputy Chairman of the Kherson Oblast Council.

Sergey Gaidai, governor of Luhansk, said that in the city of Starobilsk, the population was banned from leaving and people were forced out of their homes to vote.

In the city of Bilovodsk, a company director told his employees that voting was mandatory and anyone who refused to participate would be fired and their names given to security services, Reuters reported. The agency specifies that they cannot verify reports of coercion at the moment.

According to TASS data, voter turnout in the Donetsk region on Friday was 23.6%. More than 20.5% of voters with the right to vote in Zaporizhzhia region, 15% voted in Kherson region yesterday, the Russian news agency Interfax reported, citing officials from the polling stations.

"Activity is enough for the first day of voting," commented the chairman of the Russian-appointed election commission in Kherson, Marina Zakharova, quoted by TASS.

Polling stations were also established in Moscow for residents of these regions who now live in Russia. Kremlin supporters gathered at rallies in Moscow and St. Petersburg to support the referendums and the "special operation," reports Reuters.

The vote to join Russia was hastily arranged after Ukraine retook large parts of the northeast in a counter-offensive earlier this month.

Meanwhile, Ukrainian troops continue their advance along the Seversky Donets rivers in Donbas and Ingulets in Kherson region, despite attempts by the Russian army to stop them by blowing up the sluices along the upper reaches of those rivers.

This was stated in today's summary of British military intelligence, distributed by the Ministry of Defense in London, reported Reuters.

The embankment near the village of Pechenegi in the Kharkiv region was hit by ballistic missiles or other similar weapons on September 21 and 22. A dam near Kryvyi Rih in central Ukraine was damaged a week earlier.

The aim was to cause the rivers to approach the fords and bridges used by the Ukrainian troops. But in both cases the strikes were carried out relatively far from areas of active hostilities and were unlikely to cause serious difficulties for Ukrainian operations, the British military said.

According to Charles Michel, Russia should be excluded from the UN Security Council

In his address to the organization's General Assembly, without specifically naming Russia, Michel said that when a permanent member of the Council starts an unprovoked and unjustified war that is condemned by the General Assembly, the removal of that member should be automatic.

And according to the high representative of the European Union for foreign policy and security - Josep Borrell, Brussels should take Vladimir Putin's threats to use nuclear weapons seriously.

The EU is not asking anyone to choose between East and West, North or South. But there is a choice to be made.

The EU's choice is respect for borders, rather than aggression. It's cooperation rather than threat. It's rules-based order, rather than the law of the strongest.#UNGA pic.twitter.com/bYJFKfiwE7

Biden: If Russia annexes Ukrainian territories, the reaction will be swift and harsh

The United States "will work with its allies and partners to introduce additional sanctions against Russia that will be swift and harsh" if Moscow annexes Ukrainian territories, US President Joe Biden said, AFP reported.

"The referendums organized by Russia are a travesty, a false pretext to attempt to forcibly annex parts of Ukraine," Biden said.

The United States has already introduced several packages of economic and financial sanctions against Russia in connection with the conflict in Ukraine, notes AFP.

Earlier, the leaders of the G7 countries "strongly condemned" the "fake referendums" on annexation organized by Russia in the territories occupied by it in Ukraine and said that they would "never" recognize them as "legitimate", reported AFP.

"We will never recognize these referendums that appear to be a step towards Russian annexation, "nor likely annexation if it happens," the leaders said in a joint statement issued by Germany, which is this year's rotating chair of the G7 (Germany, Canada, USA, France, Italy, Japan and Great Britain).

"We call on all countries to 'categorically reject these fake referendums," the statement quoted by AFP also said.

Moscow wants to "create a false pretext for changing the status of a sovereign Ukrainian territory that is subject to ongoing Russian aggression" and "these actions are a clear violation of the UN Charter and international law," according to the G7 leaders.

The G-7 believes that "these sham referendums have neither legal force nor legitimacy, as evidenced by the hasty methods of organization by Russia, which in no way respect democratic standards, as well as by the frank intimidation of the local population."

These referendums, in areas forcibly placed under the temporary control of Russia, in no way represent a legitimate expression of the will of the Ukrainian people, who constantly resist the Russians to change the borders by force, the G-7 leaders also stated.

Russia has replaced the general in charge of logistics

Russia announced on Saturday that it was replacing the top general in charge of logistics until its military operation in Ukraine ran into a series of logistical problems, AFP reported.

"Army General Dmitry Bulgakov has been relieved of his post as Deputy Minister of Defense and will be replaced by Colonel General Mikhail Mizintsev," the Russian Ministry of Defense announced in Telegram.

Mizintsev, 60, is on Britain's blacklist for his involvement in the siege of Mariupol in Ukraine, which was taken over by Russian forces in May.

The Russian military operation and the recent successes of the Ukrainian army on the battlefield have exposed significant gaps in the logistics of Moscow's army.

According to some analysts, logistics is the weakest link in the Russian military, which has been causing problems since the invasion of Ukraine began on February 24.

The partial military mobilization announced by President Vladimir Putin on Wednesday is another logistical challenge.

The hundreds of thousands of reservists from all over Russia need to be equipped and trained before being sent to the battlefield, notes AFP.

Hungary will not support new EU energy sanctions against Russia

Energy is an "absolute red line" and Hungary will not support European sanctions against cooperation with Russia in this field, warned Hungarian Foreign Minister Peter Szijjarto.

Earlier this week, European foreign ministers agreed to begin work on an eighth package of sanctions after Moscow announced that it would mobilize and send 300,000 more troops to Ukraine.

Before the summit in Prague on October 6, the European Commission is expected to come up with specific proposals to increase the list of sanctioned persons, tighten controls on exported technologies and cap the price of Russian oil. Unanimity of the 27 member states is required to accept the sanctions.

In an interview with Russia's Novosti news agency published today, Hungary's top diplomat admitted that it is currently impossible for his country to physically replace Russian oil, as the possible alternative pipeline lacks sufficient capacity.

Regarding natural gas, Hungary has no other source that can supply the same amount as Russia supplies, Peter Szijjarto emphasized.

In the summer, Budapest made additional deliveries from Gazprom. Thanks to them, Hungary now has enough reserves in its gas storages, the Hungarian foreign minister said, adding without specifying that "it will be impossible for a number of other countries in Europe to survive the winter without Russian gas."

Szijjarto also told the Russian agency that sanctions in the field of nuclear energy - such as were discussed this week after consultations between the American and Ukrainian energy ministers - are also unacceptable for Budapest.