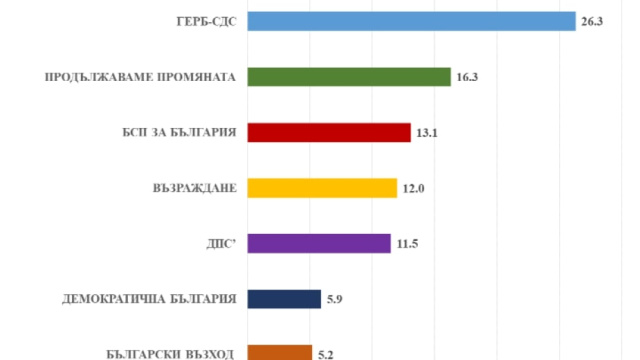 GERB leads by nearly 10 percent over the second political force "We Continue the Change", according to a new sociological survey by the Mediana agency. According to the research, there is a high probability that there will be 8 political forces in the next National Assembly, all that were in the last parliament plus "Bulgarian Rise".

The third political force according to the "Mediana" survey is "Bulgarian Socialist Party" with 13%, followed by "Vazrazhdane" and DPS - respectively with 12 and 11 percent support.

According to the research, 8 political forces cross the 4 percent barrier for entering the parliament - the first three are also "Democratic Bulgaria" - with nearly 6 percent, "Bulgarian Rise" with over 5 percent, "There Is Such a People" with 4.7 percent.

"Stand Up Bulgaria" remains close, but below the line, with 3 percent support.

"Mediana" specifies that the battle from second to fifth place is ahead and depends on the mobilization of these parties.

The results of the public opinion survey on political attitudes show an even lower voter turnout of 35 percent of voters in the vote on October 2.

Among the politicians with the highest rating is President Rumen Radev - with 52% approval, followed by Boyko Borisсov and Kornelia Ninova - with 25 and 22% approval, respectively.

The research reports increased anxiety regarding personal material well-being, with 61% believing that in the next one year the situation in our country will worsen, with 47% answering that their material situation will worsen.

Nearly 40% believe that their families will have to save on heating and food in the coming months.

12% of those asked are afraid not of impoverishment, but of the possibility of falling into extreme poverty.

At the same time, fears of war in the immediate future have grown, with the number of people who believe there is a high risk of war in the near future increasing by 9% in just three weeks.

The research of the sociological agency "Mediana" was carried out with its own funds among 1,008 adult citizens, in the period September 16-22, using the method of direct standardized interview.