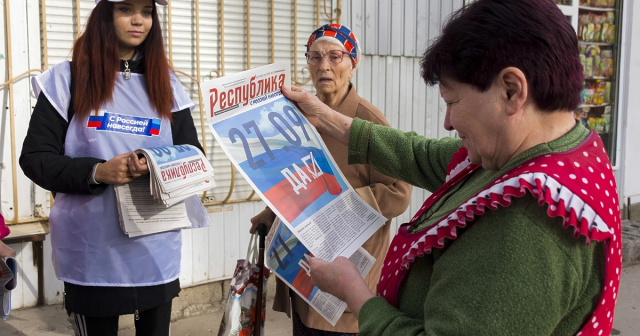 Referendums have started in 4 regions of Ukraine on joining Russia

Voting has begun in Russian-held Donetsk and Luhansk regions, and parts of Ukraine's Zaporizhzhia and Kherson regions in Moscow-announced referendums on their accession to the Russian Federation.

It will last until September 27.

The questions that people have to answer differ slightly in individual regions, and in the Donetsk region, they will be presented only in Russian.

"Are you in favor of Zaporizhzhia Oblast leaving Ukraine, its transformation into an independent state and its entry into the Russian Federation with the rights of its subject" - this is, for example, the question that the residents of this oblast (region) must answer.

The conduct of the referendums will be monitored by the Russian Central Election Commission.

The Russian plans were condemned by both Ukraine and Western countries. The European Union has said it will not recognize the results and is preparing a new package of sanctions.

On the occasion of the vote, the President of Ukraine Volodymyr Zelensky said that the decisions of the Russian leadership do not change anything for Ukraine. He stated that Russia plans to mobilize up to one million people, but there is still silence about this. He called on Russian citizens to oppose the intentions of the authorities.

"Now is the time to choose. For Russian men, it is a choice to die or to live, to be maimed or to keep their health. For women, the choice is to lose forever their husbands, sons, grandsons, or somehow try to protection from destruction, from war, from a single man. 55 thousand Russian soldiers died in this war in half a year, and tens of thousands are wounded and maimed. Want more? No? Then protest, fight, run or surrender in Ukrainian captivity. These are the options for you to survive."

Over the past night, the Ukrainian city of Zaporizhzhia was subjected to Russian shelling, with at least 10 rockets fired and material damage was caused, the head of the local administration Oleksandr Starukh announced. The city of Mykolaiv was also shelled.

UN Secretary-General Antonio Guterres and senior diplomats said at a special meeting of the Security Council that the war in Ukraine is causing "unspeakable suffering and devastation," world agencies reported.

On the occasion of the announced intention to hold from today until September 27 in the self-proclaimed Donetsk and Luhansk "people's republics", as well as in the Kherson region and the Zaporizhzhia region, referendums on the accession of these Ukrainian territories to the Russian Federation, German Foreign Minister Annalena Baerbock insisted on its cancellation and again called on the Russian president to stop the war in Ukraine.

Baerbock and other diplomats criticized Russia's top diplomat, Sergey Lavrov, for leaving the UN meeting immediately after his speech.

In it, he accused the West of directly intervening in the war by supplying weapons to Kyiv and training Ukrainian soldiers. According to him, this is done in an attempt "to continue the fighting as long as possible regardless of the casualties and destruction and with the aim of breaking and weakening Russia".

United States Secretary of State Antony Blinken called on the world to hold Russian President Vladimir Putin accountable for the invasion of Ukraine.

US Secretary of State Antony Blinken called on the world community to hold Russian President Vladimir Putin accountable for the invasion of Ukraine. Blinken spoke at a meeting of the UN Security Council.

The #1 US diplomat has said that the international rules that the UN is supposed to uphold are under threat.

"We cannot and will not let President Putin get away with it," Blinken said.

The US Secretary of State called on the world to show how important the principle is that one country cannot pre-draw the borders of another by force. Otherwise, he said, a message will be sent to "aggressors" around the world that they can ignore this principle.

Along with denouncing the Russian invasion, Thursday's special session blamed Russia for human rights violations committed during the war in Ukraine.

At the meeting, Russian Foreign Minister Sergey Lavrov denied the accusations and at the same time demanded punishment for the government in Kyiv. Lavrov said:

"The United States and its allies, with the tacit approval of international human rights organizations, are covering up the crimes of the Kyiv regime."

In its accusations against the Kremlin, the USA was supported by countries such as France, Great Britain, Norway, Albania and Ireland.

Blinken and Lavrov are in New York for the session of the UN General Assembly, but the two had no direct contact. After the Russian invasion of Ukraine, the US Secretary of State avoided a face-to-face conversation with his Russian counterpart. Blinken said in the summer that the problem was that the US was seeing no signs that Russia was ready to engage in meaningful diplomacy.

The meeting in the Security Council took place against the background of the partial military mobilization announced by President Putin and a threat to the West.

At the same time, the deputy head of the Russian Security Council, Dmitry Medvedev, said that the Russian army and weapons, including "strategic nuclear weapons", could be used to defend the territories annexed by Russia, including Crimea.

In an interview with the BBC, US National Security Council spokesman John Kirby criticized Putin's hints about using nuclear weapons as irresponsible and said they were being taken "seriously".

Kirby said it was a "dangerous precedent ... in the context of a war that (Putin) is clearly losing." The spokesman for the US National Security Council also told the BBC that for now Washington sees no reason to change its deterrence policy regarding nuclear weapons.

According to information from official sources for "Washington Post" in the past months, the United States has used a communication channel to warn the Russian government about the disastrous consequences of the use of nuclear weapons. The messages in the communication emphasized what the administration had been saying publicly, according to the source.

The publication adds that in the public space, Washington generally strategically maintains an unclear position with the aim, according to the sources, of the Kremlin being disturbed by the uncertainty of how America would respond.

The situation is also closely monitored due to the referendums announced for today in Russian-occupied territories in Ukraine on joining Russia.

UN Secretary-General Antonio Guterres described the referendums on annexing territories as a "violation of the UN Charter", as was the message from the rostrum of the world organization by US President Joe Biden on Wednesday.

At the same time, the administration in Washington hopes for unity among countries that have pledged to help Ukraine by supplying weapons, imposing sanctions and reducing its dependence on Russian energy.

The Washington Post reports that at the UN General Assembly, leaders from countries in Eastern Europe close to the hostilities, such as Slovakia and Estonia, expressed hope that the coalition for Ukraine would remain strong despite expectations of rising energy and other commodity prices that would could create additional challenges.

Bulgaria is represented at the world forum by a delegation led by the Acting Minister of Foreign Affairs Nikolay Milkov. According to the UN program, Milkov will deliver a speech to the General Assembly on Saturday in a plenary session, which starts at 4:00 p.m. Bulgarian time. In the program, his speech is the 19th in a row.

Germany is ready to accept Russian deserters from the mobilization

Germany is ready to take in Russian defectors, ministers have signaled amid reports of people fleeing the partial mobilization ordered by President Vladimir Putin.

"Defectors threatened with serious reprisals can as a rule receive international protection in Germany," Interior Minister Nancy Faeser said, according to excerpts from an interview with the Frankfurter Allgemeine Zeitung newspaper.
Separately, Justice Minister Marco Buschmann tweeted, using the hashtag "partial mobilization," that "apparently many Russians are leaving their homeland and anyone who hates Putin's course and loves liberal democracy is welcome in Germany."

Germany has taken in around one million Ukrainians fleeing the Russian invasion but has also welcomed Russian dissidents.

Faeser said 438 Russian dissidents - many of them journalists - had benefited from an accelerated procedure to obtain protection in Germany. However, she stressed that political asylum would not be granted automatically, and applicants would first undergo security checks.

Zelensky to the Russians: “Fight, run or surrender”

The President of Ukraine, Volodymyr Zelensky, used his regular statement this evening to address Russians in Russian on the occasion of the partial military mobilization announced a day earlier by Vladimir Putin:

"I will explain to the Russians in Russian what is happening.

In the cities of Russia there were protests against the mobilization - although not massive, but there were and still are. And this is happening not only in Moscow and Petersburg. We know the real mood in the regions of Russia. We see that people in Dagestan, in Buryatia, in the other national republics and regions of Russia understand that they were simply thrown away.

They were thrown away to die.

Why, for example, Dagestanis or anyone else should die in Kharkiv region or near Donetsk? Because one person in Russia decided so. For all citizens of Russia. There is no other reason. That's what he wants.

All of you are already complicit in these crimes. Murders and torture of Ukrainians. Because you were silent. Because you are silent.

And now it's time for you to choose. For men in Russia, it is a choice to die or live, to be crippled or to keep healthy. For women in Russia, the choice is to lose their husbands, sons and grandchildren forever, or to try to protect them from destruction. From the war. From one person.

Just think of the amount of people they want to pick up. We know for sure that the call letters for 300 thousand people were pre-printed and signed - before the decision to mobilize, our intelligence proved it.

But the Russian leadership is about to recruit up to one million men into the army. This is the main thing they keep silent about. We know they will collect all, indiscriminately. And not just reservists, but all kinds of men. Anyone who has been so intimidated that they fear avoiding war more than dying in war.

55 thousand Russian soldiers died in this war in half a year. Tens of thousands are injured, maimed. Want more? No? Then protest! Fight! Run! Or surrender into Ukrainian captivity. These are the options for you to come alive.

Russian mothers, do not doubt - the children of rulers will not end up on the battlefield. Those who make the decisions for your country protect their children. And your children are not even buried."