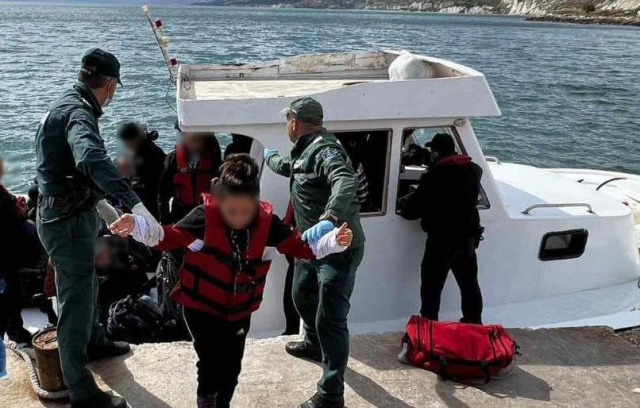 38 people, including 22 men, 8 women and 8 children, one of whom is a baby, posing as Syrians and Afghans, were brought safely to the Bulgarian shore by Border Police yesterday morning in a complex operation in the Black Sea, reported the Ministry of the Interior.

At 6:25 a.m. an object was spotted by the Blue Border Surveillance Information System in the area east of Cape Shabla, moving in the direction of the border with Romania. Operators attempted to contact the vessel but no response was received.

A border police vessel was immediately directed there, and the GKN from GPU-Kavarna was sent along the coast for surveillance. At 10 a.m., the border police vessel reached the boat and an inspection team boarded, finding 38 foreign nationals posing as Syrians and Afghans. Due to the bad weather conditions and the impossibility of transferring the people from the boat to the border ship, the border guards remained on board to ensure the safety of the migrants during the transition to the port of Kavarna.

During the operation, communication was maintained with the Romanian Coast Guard in connection with the currently ongoing Multipurpose Maritime Operation "Black Sea 2022" in Romanian and Bulgarian waters, coordinated by the European Border and Coast Guard Agency Frontex.