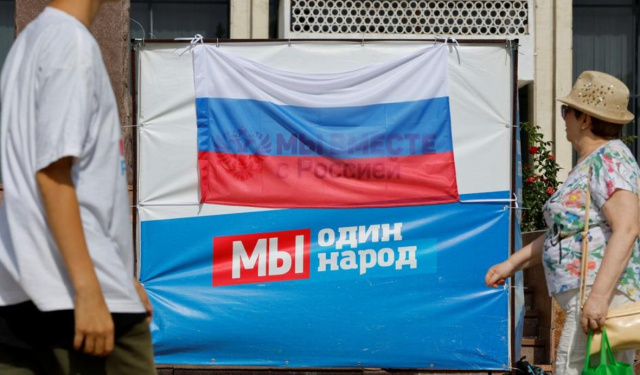 Earlier today, Medvedev said that such decisions would "cement geopolitical changes" and give Moscow additional reasons to defend its occupied Ukrainian regions.

The referendum in the self-proclaimed Luhansk People's Republic (LPR) and Donetsk People's Republic (DPR), as the two regions in Donbas are called, are scheduled for September 23-27. The date for the referendum in Kherson has not yet been set, but the city's self-proclaimed administration has announced that the decision to vote is final. Russian forces control about 95% of the Kherson region in southern Ukraine.

State Duma Speaker Vyacheslav Volodin said Moscow should support the regions' wishes, given the agreements signed between Moscow and the DPR and LPR that paved the way for the Kremlin to launch the war in Ukraine in February.

In early September, a senior representative of Russian President Vladimir Putin's “United Russia” party proposed holding referendums on joining Russia on November 4 in the Donbas and occupied parts of Ukraine. About two weeks ago, the Kremlin postponed them indefinitely.

The separatist leaders of the DPR and LPR agreed yesterday to "synchronize" their efforts to hold referendums on joining Russia, after appointed pro-Russian representatives in the two republics stepped up their calls for a vote.

Russia will punish voluntarily surrendered soldiers with 10 years in prison

Changes to the Criminal Code of Russia were adopted today, according to which Russian soldiers who voluntarily surrendered to captivity will be punished with imprisonment from 3 to 10 years.

According to the newly adopted legal changes, voluntary surrender is a crime. For the first capture, the penalty will not apply if the soldier has escaped and returned to his unit.

Failure to comply with an order during martial law, during war or in conditions of armed conflict or hostilities, as well as refusal to participate in hostilities, is proposed to be punishable by imprisonment for a term of two to three years, specifies the Russian agency "Interfax".

The punishment for theft and robbery committed by the military is up to 15 years in prison, with the commission of the crime during wartime being considered an aggravating circumstance.

The legal amendments, which for the first time introduce concepts such as "martial law", "mobilization" into the Penal Code, were voted on in three readings in one day.

Read more about the 209th day of the invasion of Ukraine here.