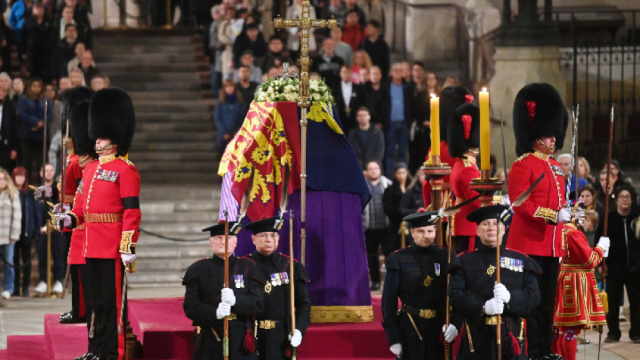 London transport authorities are preparing for the arrival of about one million people for the state funeral of Queen Elizabeth II, the Associated Press reported.

The head of the transport service, Andy Byford, said that since the death of the Queen on September 8, public transport in the British capital has begun to serve "a huge number of new passengers", but the peak of the load is expected today, informs BTA.

250 additional rail travel services will be provided across the country. According to Peter Hendy, who is the head of the British rail company "Network Rail", tomorrow will take place "the biggest operation in public transport since the Olympic Games in 2012".

In the morning, Heathrow Airport will cancel more than 100 flights to prevent the sound of planes flying over from disturbing the funeral service at Westminster Abbey, as well as the laying of her coffin in the grave at Windsor Castle.

The west London airport said the measures would affect 15 percent of its planned 1,200 flights.

The funeral of Elizabeth II requires London to organize the largest security operation ever held in the British capital, the Associated Press reported.

Mayor Sadiq Khan stressed that today’s mourning ceremony presents an unprecedented security challenge, as hundreds of thousands of city residents and guests will fill its central parts, and the list of officials includes 500 people, including emperors, kings, queens, presidents, prime ministers and other leaders from around the world.

"There has not been such a gathering of so many world leaders in one place for decades," Khan said.

"There may be bad people who want to harm certain individuals or some of our world leaders, so we are working extremely hard with the police, security services and many, many others to ensure that the funeral goes ahead as smoothly as possible," added the mayor of the British capital.

Stuart Cundy, a senior spokesman for London's police force, said the highly complex police operation was the biggest of its kind in London's history and would be more difficult than the 2012 Olympics.

Today, the British capital will be guarded by more than 10,000 police officers, with reinforcements arriving from across the UK. Hundreds of volunteers from the armed forces will perform organizational functions along the route of the funeral procession.

However, this is only the most visible part of the security operation, which is run from a high-tech center located near Lambeth Bridge in the Parliament area.

Street drains and waste bins are checked and sealed. Today there will be police monitors on the roofs, law enforcement officers with police dogs on the streets, the River Thames will be guarded by navy personnel, and there will be mounted police.

At 8pm local time last night, the UK observes a minute's silence in memory of the late Queen. People were invited to do this at home, in front of their homes, on the street or at vigils and public events, PI Media/DPA reported. The start of the minute of reflection was given by the chime of Big Ben. One minute later, at 8:01 p.m., another strike marked the end of the minute's silence.

Prince Andrew was the latest member of the royal family to pay tribute to his mother. He highlighted her "knowledge and boundless wisdom".

And yesterday in London, a huge queue of people wishing to say goodbye to the Queen continued to gather. Her coffin will lie in state in Westminster Hall until 6.30 today. People were warned not to stand in line any longer because the wait was 13 hours and more. Authorities are expected to decide when access to the queue will be suspended.

Foreign leaders continue to arrive in the UK to attend the funeral service for the Queen at Westminster Abbey tomorrow.

Saudi Crown Prince Mohammed bin Salman will not be among them. His possible appearance at the ceremony has already caused a sharp reaction among human rights organizations in Britain. The prince is no longer expected to attend the funeral of Queen Elizabeth II on Monday, a British Foreign Office source said on Sunday, as quoted by Reuters. The change was made by Saudi Arabia, the source added.