Bulgaria’s Pomorie declared a State of Emergency after Powerful Storms 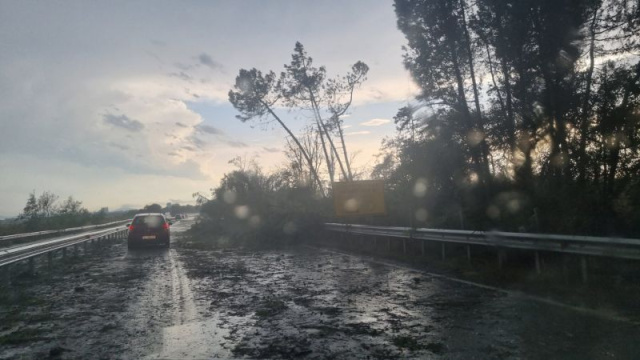 Pomorie remains without electricity after yesterday's powerful storm that uprooted trees, brought down roofs of hotels and private homes and flooded the streets of the seaside town.

Mayor Ivan Alexiev declared a state of emergency, which will remain until Monday, BNT and bTV reported.

A total of four people were injured by the hurricane that hit Burgas yesterday afternoon. Two women were injured in Pomorie after the ceiling of an indoor swimming pool in a hotel fell. A 16-year-old boy has a broken collarbone after the wind knocked him off a trampoline in the "Izgrev" quarter of Burgas. In the same neighborhood, a woman suffered cuts from broken glass.

At this time, the crisis headquarters of the municipality is also having a meeting. The regional governor of Burgas, Prof. Maria Neikova, explained that the situation in Pomorie has normalized, but the damage is huge and calculations are yet to be made as to how much it will cost.

A boat owner told Nova TV that his vessel was among the damaged. The roof of a nearby establishment blew off, breaking his and the neighboring boats.

Mayor Ivan Alexiev said that during the storm even mobile operators had no network coverage.

Several villages in the Burgas region are without electricity. In the village of Laka, the electric poles have fallen and the emergency teams are waiting.

"I am appealing for the electricity supply to be restored as soon as possible. We have cordoned off the area, but I cannot stop the people, it is very dangerous", pointed out the mayor of the village, Jasmina Dimitrova.