Bulgarian Services: Serbia is Russia's Conduit, the Black Sea is a Major Theater of Conflict 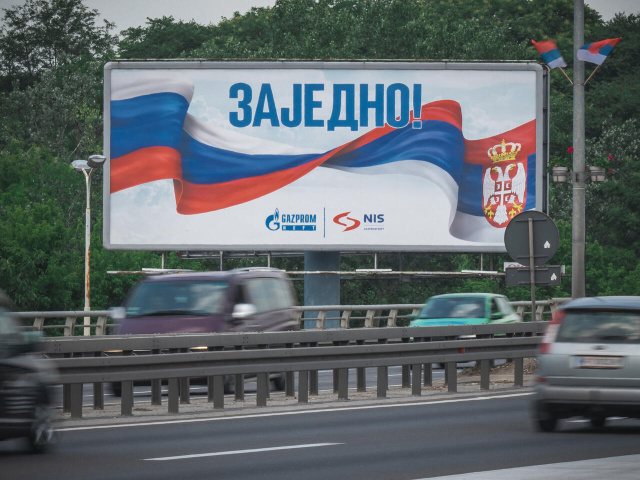 "Together" sign depecting the friendship between Russia and Serbia

In the Western Balkans, Serbia is the main conduit of Russian interests leading to destabilization of the entire region. The Black Sea is becoming a major center of opposition because of Russia's actions.

These are the main conclusions from the reports of the Bulgarian security services.

The Western Balkans and the Black Sea region are of key importance for Bulgaria's national security. It was in these two regions that processes took place last year, which were carefully monitored by the three special services - the State Agency for National Security (SANS), the State Intelligence Agency (SIA) and the Military Intelligence Service (MIS). The reports on their activities in 2021 were approved by the Council of Ministers.

The year 2021 passed under the sign of the Bulgarian-Macedonian misunderstanding, caused by the theft and falsification of Bulgarian history by the authorities in Skopje and their imposed language of hatred against everything Bulgarian. The RNM's refusal to maintain good neighborly relations prevented the country from starting negotiations for EU membership.

In its report, SANS notes that challenges remain in the Western Balkans related to inter-state and inter-ethnic tensions, the application of the rule of law, compliance with good-neighborly and friendship agreements, the use of hate speech, attempts to appropriate history and identity, and rights violations of persons with Bulgarian self-awareness.

For SIA, the situation in the Western Balkans was negatively influenced by both the manifestations of nationalism and the ongoing attempts of external factors to impose their influence in the region.

The topic of the Western Balkans is key in the activities of military intelligence, which devotes a significant part of its report to the challenges and risks for Bulgaria arising from the region. MIS notes that the processes in the region were conditioned by the desire to accelerate European integration.

"In this aspect, the active lobbying at the international level of the rulers of the Republic of North Macedonia (RNM) and Albania continued in support of their efforts to join the EU, as well as to increase the pressure on Bulgaria in order to promptly settle the unresolved issues between Skopje and Sofia", emphasized from the military intelligence.

MIS notes that Serbia remained the main conduit of Russian interests in the region, although it sought to pursue a relatively independent policy regarding its national security. "It continues to rely on Russia and China for the modernization and rearmament of the Serbian armed forces, while actively developing its own military-industrial complex in parallel," the document states.

The Open Balkan project (the so-called "Mini Schengen") initiated by Belgrade with the aim of expanding regional cooperation in the sphere of economy and trade continues to develop with the active participation of the RNM and Albania but remains ignored by Kosovo, Montenegro and BiH.

The report also analyzes the situation in Bosnia and Herzegovina. It remains unstable because of the activities of the leader of the Serbian community, Milorad Dodik, who wants to strengthen the autonomy of Republika Srpska. He demanded the withdrawal of the Serbs from "the national armed forces, judicial and tax institutions and the establishment of separate ones based on Serbian ethnicity".

The activity of the pro-Serbian parties is eroding the statehood of Montenegro as well. "Attempts of pro-Serbian parties to increase their positions in the state government deepened the political crisis in Montenegro and led to the overthrow of the government of Zdravko Krivokapic, although the new minority cabinet will not ensure stable governance and speed up the country's EU membership," is stated in the document.

No progress has been made in the Kosovo-Serbia dialogue, including due to the determination of the rulers in Pristina to apply a reciprocal approach in relations with Belgrade.

SANS notes that in 2021 the Black Sea region has become a major theater of intense competition and confrontation.

"In the second half of the year, the Russian Federation launched a large-scale hybrid campaign to stop NATO's eastward expansion and preserve Russian influence in neighboring countries. For this purpose, it engaged a complex toolkit, including diplomacy, military power, special services, economic leverage and dependencies (mainly in the energy sphere), information propaganda and disinformation campaigns, and cyberattacks,” reports the counterintelligence.

SANS warns that the underdeveloped diversification of sources and routes limits Bulgaria's ability to counter the emerging fluctuations in the natural gas market in the context of the energy crisis in Europe in 2021. “The significant dependence on Russia creates additional risks given the hybrid operation against Ukraine that began in mid-2021 and escalated into a military invasion in February 2022. In this regard, there are risks to the security of supplies,” said the counterintelligence.

SIA succinctly notes that the crisis in Eastern Ukraine, the periodic tension over Nagorno-Karabakh and the "frozen" conflicts - Transnistria, South Ossetia and Abkhazia, continued to generate security risks and threats. Asymmetric and hybrid risks and threats remained among the key factors negatively impacting the external security environment.

The MIS gives detailed attention to the Black Sea region, pointing out that the main destabilizing factor was the growing opposition of the Russian Federation to the West and its pressure on Ukraine. They are determined by the aspirations of Moscow through force mechanisms to change the world order according to its understanding and to separate its sphere of dominance and influence.

The military notes the worsening of Russia's relations with the US and the West in general. The tension is growing, and the two meetings held between Presidents Vladimir Putin and Joe Biden in June and December 2021 help to reduce it.

"At the same time, the redeployment of Russian forces from October 2021 to the area of ​​the common border with Ukraine did not correspond to the usual practice and the annual training cycle of the Russian Armed Forces. Through their continued concentration, the Kremlin created expanded opportunities for escalation, thereby seeking to ‘model’ NATO and EU behavior to achieve its own strategic goals. As a result, the military threat to security not only regionally but globally was progressively increasing," the document says.

SANS points out that the activities of a group of Bulgarians who spied for Russia, as well as of Russian citizens connected to the Russian special services, were stopped. Read more about it here.