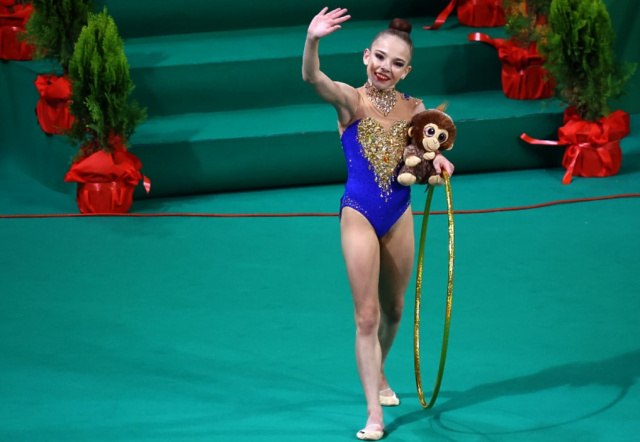 Stiliana Nikolova brought the first medal for Bulgaria from the World Rhythmic Gymnastics Championships that started yesterday in Sofia. The 17-year-old debutante of such competition won a silver medal in the hoop final.

Nikolova played her combination superbly and received a score of 33.400 points.

"It was definitely a tough day, but we are prepared for this World Championship. Of course, I am happy for this medal. Yes, the hoop was better in the qualifiers than in the final. But I also have Saturday, God willing," said Nikolova on the occasion of the all-around.

This is the first medal for Bulgaria in hoops in 21 years. The last honor of the competition was given to Simona Peycheva from the championship in Madrid in 2001.

Stiliana Nikolova got the first hoop score in qualifications - 34.150 points, but in the final she got a little lower. The only Bulgarian in the competition committed inaccuracies on the ball (30,300 points) - 11th. Thus, she was left out of the final of this competition.

In ball, the world title was won again by Sofia Raffaeli, who performed her combination perfectly and was evaluated with 34.900 points.

On Thursday, the World Championships continues at 9:30 a.m. with the women's club and ribbon qualifiers. Stiliana Nikolova will play in Group D, which starts at 2:45 p.m. The second Bulgarian Boryana Kaleyn missed the World Championship due to a viral illness, it became clear earlier today. She is in hospital with a high temperature - 39.4.

"I have the extremely unpleasant duty to inform you that one of the biggest favorites to win the world title, Boryana Kaleyn, will not be taking part. She is in hospital with a very high fever. I am extremely sorry, most likely she has some kind of viral infection, still we don't know the details.

Doctor Dobrev of our team and doctor Sirakova, who is responsible for the FIG World Championship, are categorical that Boryana cannot take part with such a high temperature," said Iliana Raeva. "The only thing I can say is that I am extremely sorry, because both her personal trainer Marijana Pamukova and Branimira Markova and I, who have been with her for the last ten days, are of the opinion that she was in a brilliant shape. Yesterday she did two wonderful training sessions. Before the first training session she felt a bit unwell and nauseous, most likely a virus, but with such a high temperature the doctors and I think that there is no World Cup or sport that is more important than health to one competitor," added Raeva.