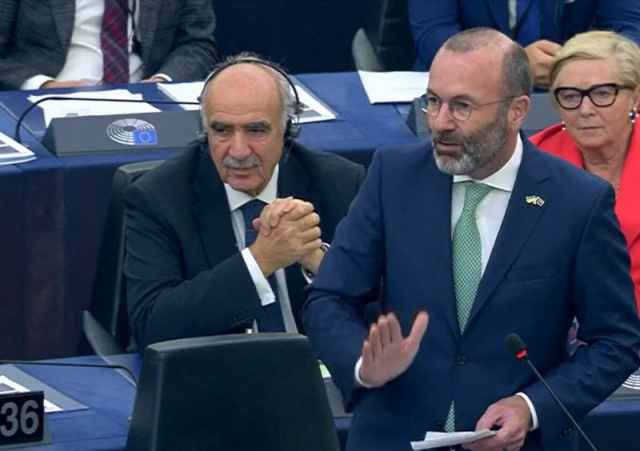 The reaction of indignation in the European Parliament began when Weber entered into a controversy with the leader of the Greens in the EP Ska Keller and said that when talking about "pro-Europeans and anti-Europeans", the topic should not be politicized. The hall responded with laughter.

"Please listen. 'Podemos' are in the Spanish government. Three of their ministers voted 'no' to Finland and Sweden joining NATO. We have 'Five Star' together with 'Lega' in the Italian government. Nobody here asked for a debate on that. One more argument - dear Ska, you had a joint campaign coalition with Melenchon. Melenchon has publicly stated that he will not respect European laws if he comes to power. That was Melenchon's position," Weber said amid growing disapproval from the hall.

The height of the uproar in the EP chamber came when Weber declared:

"And another example - at the last Conference of the parties we debated the situation in Bulgaria. Two independent judges declared the arrest of the opposition leader in Bulgaria Boyko Borissov illegal, it is really serious. I just wanted a debate about the rule of law in Bulgaria, but I was refused by The Greens. Don't politicize things when we talk about the rule of law!"

The EPP supported Weber's words with applause, but the majority of the hall did not approve of his speech and the booing continued. There were calls for EP President Roberta Metsola to take the floor. She countered that she had not taken the floor of a single speaker since the start of the four-hour session.

Today, the European Parliament had to discuss the case of the arrest of the chairman of GERB and former Prime Minister Boyko Borissov in March of this year by order of the former Minister of the Interior in Kiril Petkov's cabinet, Boyko Rashkov, without adopting a resolution on the matter.

On August 24, the Sofia City Administrative Court declared the order for Borissov's arrest illegal. Its decision was final.

Earlier today, the Bulgarian businessman hiding in Dubai, Vasil Bozhkov, commented on the topic. He wrote on Facebook: "I have sent to the EP the facts for which Borissov (Boyko Borissov), Goranov (Vladislav Goranov - former Minister of Finance under the management of GERB) and Sevda (Sevdelina Arnaudova - PR of GERB) were detained. The same facts, for which they shall be judged."

GERB's partner EPP has repeatedly called on the EP to condemn the actions of the Bulgarian government with Prime Minister Kiril Petkov and the Ministry of the Interior regarding the arrest of GERB's leader Boyko Borissov.