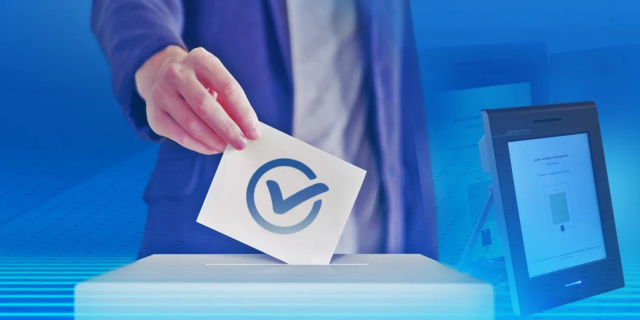 Eight political formations are in the "game" for seats in the Bulgarian National Assembly, and the prospects of two of them will depend on the remaining weeks of the campaign, on the activity and on accompanying factors. Two stand out below the barrier. These are the electoral attitudes from the beginning of the campaign. To date, less than half of eligible voters in Bulgaria are expected to vote, which is relatively low by the standards of recent decades of turnout. This makes predictability low and shifts are possible - with possible fluctuations in turnout and varying degrees of mobilization of the different types of electorates that the parties have.

The conclusions are from a nationally representative survey by "Gallup International Balkan" for the Bulgarian National Radio - commissioned and financed by the public media and conducted between September 2 and 10 among 1,002 adult Bulgarians through a direct "face-to-face" tablet interview.

If the elections were held in the first ten days of September, GERB-SDS would receive 25.9% of the potential votes, "We Continue the Change" – 19.2%. These two formations are in the main battle in this campaign and their arrangement will depend on the extent to which WCC succeeds or fails in mobilizing the supporters it has at its disposal to vote. GERB, on the other hand, appears to be fairly consolidated, although apparently not growing.

DPS and "Vazrazhdane" so far look like direct competitors in the ranking, with 11.5% and 11.3%, respectively. Because of the expected vote for DPS from abroad, for example, as well as because of the difficult-to-capture tendencies of potential mobilization of more radical supporters of "Vazrazhdane", it is difficult to predict the place of these parties, both in relation to each other and in the arrangement itself. BSP has 9.8% of the potential vote. "Democratic Bulgaria" seems to be strengthening and getting closer - with 7.6%. 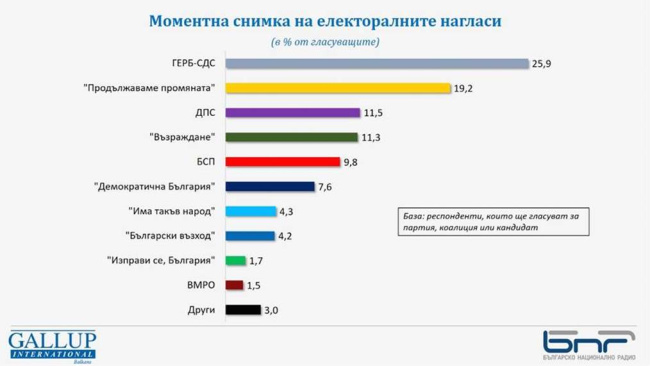 Close to the barrier are "There Is Such a People" and "Bulgarian Rise", with 4.3% and 4.2% each. Both formations have their clear prospects to be in the parliament. Of course, these views very much depend on the conjuncture and above all on their own mobilization. Under the barrier stand out among all "Stand Up, Bulgaria" and VMRO (IMRO), respectively with results of 1.7% and 1.5%.

It is expected that 49% of eligible voters will participate in the elections (it remains to be seen what proportion this is compared to the formal electoral roll), or a range of about 2.6 million people. Of course, given the overall tense situation, wide deviations are possible.

The sample is representative of the adult population of the country. The research was conducted with tablets, between September 2 and 10, among 1,002 people, using the face-to-face method. The absolute maximum error is ±3.1% at 50% shares. 1% of the entire sample equals about 54 thousand people.