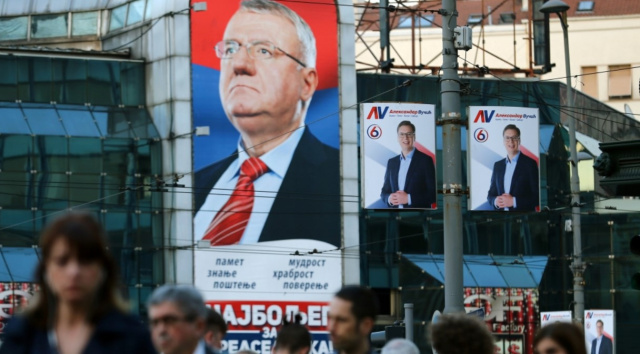 The Serbian Orthodox Church (SOC) awarded the leader of the extremist Serbian Radical Party (SRP), Vojislav Seselj, who in 2018 was sentenced to ten years in prison by the Hague Tribunal for inciting the persecution, deportation and forced displacement of Croats in the village of Hrtkovci in Vojvodina in 1992.

The Order of St Bishop Mardari as handed to him personally by Bishop Irinei Bulatovich. "It is a real honor for me to present this order," said the bishop at the award ceremony. This is not the first order that the SOC has given to the war criminal Vojislav Seselj. Seven years ago, he received the "White Angel" order - first degree, from the Serbian Orthodox Church.

"For a long time, the SOC is not religious. It is a political organization. It has become an umbrella for the most sinister people and manifestations in this country. In the end, the SOC will be the undertaker of our country. And I am absolutely convinced of that. About Seselj himself I can say the following: Once a war criminal, a war criminal for life," said Aida Corovic, one of the most famous human rights activists in Serbia, to "Danas".

According to sociologist Vesna Pesic, President Aleksandar Vucic cannot openly defend Vladimir Putin, and for this reason he has given this task to the Serbian Orthodox Church and the extreme right. "SOC has nothing to do with religion. It has become a political factor uniting the extreme nationalist organizations that participated in the wars for the creation of Greater Serbia. For them, Putin is an example," Vesna Pesic also said.

We recall for our readers that Seselj was imprisoned by the International War Crimes Tribunal in The Hague from 2003 to 2014.