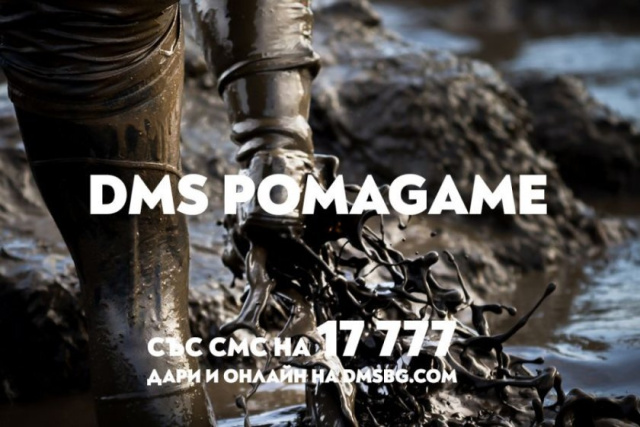 DMS POMAGAME with an SMS at 17 777 or donate online at DMSBG.COM

A campaign to raise funds to buy household electrical appliances and furniture for the families affected by the floods in Karlovo, as well as to support the parents whose students will start school, is organized by the "Workshop for Civic Initiatives" Foundation, the Bulgarian Donor Forum and the National association of volunteers in the Republic of Bulgaria.

The great downpour on September 2 destroyed the homes and lives of hundreds of Bulgarians in Karlovo region. Therefore, every Bulgarian can donate 1 Lev to support the victims of the flood by sending an SMS with the text: DMS POMAGAME to the short number 17 777.

Donations can also be made online via credit card, ePay or IRIS Solutions, as well as by bank transfer on the portal www.dmsbg.com

"We will not be able to rebuild the houses, nor save what was built for life. But we believe that we can lend a hand in this difficult moment, so we will be able to give HOPE!", the organizers also write.

In Karavelovo, they are calling for volunteers to get involved in delivering food and protecting houses from marauders

In the affected villages of Karlovo region there is an urgent need for volunteers who, in addition to cleaning up, will get involved in delivering food and water to the separated families. In addition, reports of marauders roaming around and robbing people's houses are becoming more frequent. Calls for help also appeared on social networks.

Anyone who has the opportunity can go to a place in any of the affected villages and help, as the situation continues to be dire.

"At first, the affected families continue to need volunteers to clear mud and garbage from the yards. We also need a new initiative because of the many frequent groups and marauders that go around the houses. We call for volunteers - necessarily local residents, to patrol in the evening with the police because they know and can much more easily recognize suspicious persons and outsiders," explained the coordinator of the local crisis headquarters in Karavelovo.

Because of the raids, the police have suggested that local residents join the night patrols in the villages. Volunteers are needed to deliver water and food. So far there is food, but there is still a need for more bottled water, canned food, bedding - sheets, blankets, pillows, mattresses. There is a great need for new clothes, socks and shoes.

Since the kindergarten in Karavelovo was also damaged, the children will be transported to the branch in Karlovo, where they will begin the school year. In the kindergarten itself in the village, there is a need for 20 beds, besides tables, chairs, toys.