Erdogan: The West Reaps what it Sows 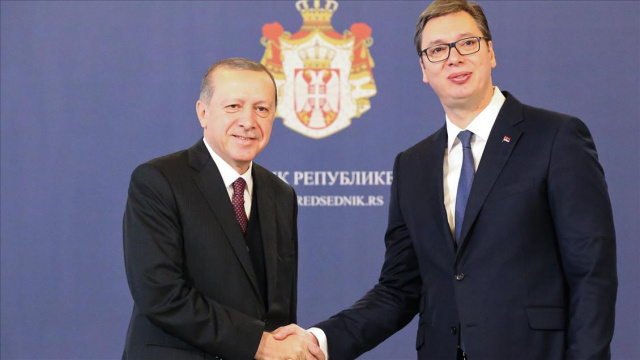 Turkish President Recep Erdogan has accused the West of provocations against Russia, which have forced Moscow to cut gas supplies to Europe. Erdogan made the statement from Belgrade, where he is on a two-day visit. Serbia is the second stop of the Turkish president's Balkan tour.

"The war in Ukraine will not end soon and those who underestimate Russia are wrong," Erdogan said from Belgrade at a joint press conference with Serbian President Aleksandar Vucic.

"I can clearly say that I do not find the West's attitude correct. The West is pursuing a policy built on provocations. There is no winner in this war, but I believe there are many losers," Erdogan said.

The Turkish president emphasized Ankara's balanced policy between Russia and Ukraine, and the maintenance of open diplomatic lines with both countries led to the holding of the highest-ranking meetings between Russian and Ukrainian representatives since the beginning of the war in Turkey.

In the course of the talks, Aleksandar Vucic asked Erdogan for help in supplying Serbia with electricity in the winter, so that Azerbaijani electricity could be transported to Serbia through Bulgaria.

Serbia has expressed interest in buying Turkish Bayraktar drones, and Erdogan is also ready to help in the dialogue with Pristina.

During the visit, 7 agreements were signed between Turkey and Serbia - one of them will allow Serbs to travel to Turkey only with identity cards.

Recep Erdogan arrived in Belgrade after his visit to Bosnia and Herzegovina. His visit there comes on the eve of parliamentary elections on October 2.

During the visit, Erdogan said that he will do everything possible to hold transparent and constructive elections. And in Bosnia and Herzegovina, an agreement was signed on travel between the two countries with identity cards. A similar agreement has been in force with Bulgaria since the end of July.

After the visits to Bosnia and Herzegovina and Serbia, Recep Erdogan will also visit Croatia.