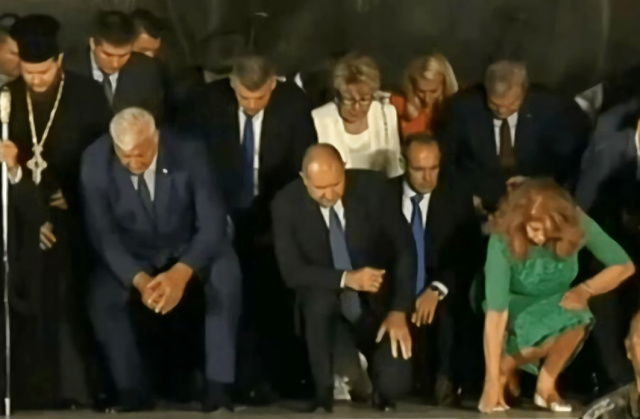 Was Russian Ambassador Eleonora Mitrofanova present at the traditional celebration of the Unification in Plovdiv on Tuesday "closely behind" President Rumen Radev - second in line among all the guests?

This question stirred up social networks after footage from TV reports showed Mitrofanova in a white suit - standing closely behind President Rumen Radev at first glance.

Bulgarian media “Club Z” learned from the press center of the mayor of Plovdiv, Zdravko Georgiev, that they invited her to the event - as they do every year. And not only her.

"Since the celebration of the Unification in Plovdiv, the protocol in the municipality invites the entire diplomatic corps - representatives of all embassies and institutions.

This is done with invitations a month in advance.

We have invited her as we have invited everyone else. Together with her yesterday, we had 15 more ambassadors who took part in various events during the day and evening. This is a traditional, established practice, which is no different this year," explained Tsvetelina Peneva from Georgiev's PR team.

Is the Russian ambassador closely behind Radev?

While it looked that way in some of the footage from yesterday's celebration, footage from the presidency from another angle shows that, at least at one point, the Russian ambassador was actually a few rows behind.

This is confirmed by other footage from TV reports. In a wider shot later in the ceremony, however, she appears next to the president: Regardless of which of the frames shows the reality, however, according to the protocol, Mitrofanova is not supposed to be there.

The Law on State Protocol stipulates that at such official events the president should be at the front, and when there is a government and the National Assembly, the prime minister and ministers, the chairman of the National Assembly, judges of the Constitutional Court, deputies and a long list of Bulgarian officials.

In this case, the protocol was not followed exactly - according to the same law (Article 9, Paragraph 5), the heads of diplomatic missions occupy a separate place to the right of the President of the Republic and Bulgarian officials.

"Which moron thought of that?"

Many political commentators were outraged by Mitrofanova's presence at the celebration, highlighting Russia's hostile policy towards us - now and during the Unification in the fall of 1885.

"Will someone explain to me which moron would think of inviting Mitrofanova to the celebration of the Unification in Plovdiv?

I congratulate this outcast with the words of Zahariy Stoyanov about Russia in the preface to Georgi Rakovski's pamphlet, 1886:

‘...every honest person who can think and reason will agree with us that our greatest enemy today is official Russia.

There is no mischief, no abomination, even meanness, that this country, led by its Girs and Katkov, has not set in motion since September 6, i.e. from that famous day, when we began our real political and independent existence,’" writes journalist Nikolay Stoyanov.

"Radev on his knees before his master. In the literal sense. Symbolism, truth and shame in one shot," commented Georgi Georgiev from "Boets".