DMS Karlovo: Bulgarians and Ukrainians in Aid of the Flooded Villages in Karlovo Region 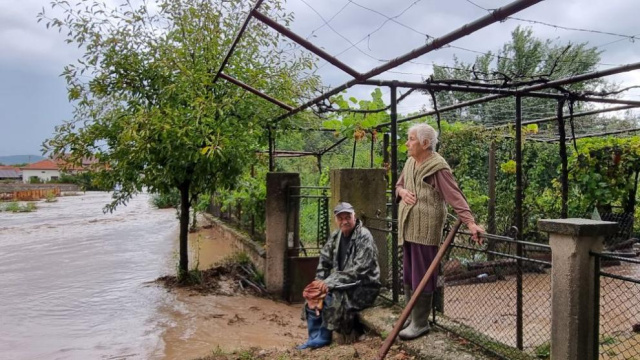 Eight years after the flood in Varna's “Asparuhovo” district in June 2014, when hundreds of people from all over the country flocked to clear away the silt and mud that poured down after heavy raining that claimed 13 lives, the miracle of volunteerism is on its way to be repeated in Karlovo region.

There, after a prolonged intense rain that fell on September 2, floors of residential and commercial buildings, industrial enterprises were flooded, the road surface was destroyed, and silt covered the villages of Bogdan, Stoletovo, Karavelovo, Moskovets, Rozino, Slatina, Hristo Danovo and Gorge.

Read more about the floods here. On the fourth day after the disaster, the power supply almost everywhere remains interrupted, street lighting poles have fallen, bridges and shafts are blocked. The non-exhaustive list of damages also includes collapsed houses and agricultural buildings, fallen and undermined bridges, which makes the sections between Karavelovo and Bogdan, between Moskovets and Bogdan, between Slatina and Rozino, as well as between Dabene and Voynyagovo impassable.

In only three of the villages, nearly 250 households were affected - flooded houses, yards, lost livelihoods, domestic animals and crops, property. In addition to electricity, there is a lack of water and food.

At the moment, the most urgent need is for physical force to clear and provide access to the flooded houses, as well as to provide emergency support to the most affected households - basic necessities, disinfectants, drinking water, foodstuffs, materials and equipment for the work of the volunteers, announced the municipality of Karlovo, which late in the evening on September 5, announced an emergency campaign - DMS KARLOVO.

If you want to help, you can send an SMS on 17 777 with the text DMS KARLOVO. For subscribers of Yettel, VIVACOM and A1.

More ways to donate (by card or bank account) HERE (in Bulgarian). "There are volunteers - from different places, who came on their own initiative, but there is not enough heavy equipment for the clearing," says Kalin Bozhkov from Varna. Together with colleagues from his company, he arrived in Slatina on Monday morning with a dump truck and an excavator to help clear the mud. "We didn't hesitate. We saw what it was and decided to come because we are human and we have to help each other".

Having lived in Canada for 23 years and with first-hand experience of disaster relief work in North America, Bozhkov believes it will take months to rebuild Slatina. According to him, the situation in the neighboring village of Bogdan is far worse.

His words are also confirmed by Emergency Rescue Plovdiv. Rescuers from the team comment that in some places the mud in the houses in Bogdan is more than a meter deep.

"Volunteers with boots and shovels, mud carts, gasoline cutters, ropes, etc. are needed to clear the sediments," said Lazar Radkov from the team.

After inspections and calls for help for the affected villages, on the eve of Unification Day, dozens of Ukrainian volunteers - refugees from the war, as well as hundreds of Bulgarians - from Plovdiv, Varna, Sofia, etc., are heading to them today.

"For three hours in Karavelovo on Monday (September 5), I saw a heavy vechile. But it's not much. I saw army volunteers. But it's not enough. I saw policemen stopping cars. I saw volunteers who came on their own initiative. They help a lot and as much as they can. From heart. But without heavy equipment it is difficult and it will take a long time," said Natalia Ellis from the "Second Home" organization in Plovdiv, which has been helping with the accommodation and integration of those fleeing the war in Ukraine for months. The decision to help was born after a conversation with a Bulgarian woman from Karavelovo, who in March helped her with the collection of medicines for Ukraine.

“She sent me a video from her village… and I woke up in the morning with one thought - at least we'll try to help. I understood on the phone that at the moment water and food are the most needed, and we will find out about the rest on the spot. I wrote it in the Second Home (Vtori Dom) group, and our women got involved, as well as acquaintances, volunteers," Natalia Ellis adds.

For Karavelovo and the other affected villages, Ukrainian refugees from Varna are also organizing help - "five hours away", points out Ramon Kuvaev - a Ukrainian living in Bulgaria for several years, who after the start of the war in his homeland, traveled tens of thousands of km, providing food and things of first necessity for the refugees accommodated in various bases and hotels in our country. "Since dozens of Bulgarians from the end of February assisted and continue to assist me in helping the Ukrainians, we could not help but come here. I set aside a certain amount from my salary and bought some food and water for the victims. The villages of Slatina, Bogdan and Karavelovo are the most affected - over 10 thousand square meters of timber for export from the settlements and over 10 thousand sq.m. mud to clear from homes.

Almost all hosts are elderly, and they lack volunteers the most. There is not much time for this, because the mud dries up and becomes almost impossible to remove," Kuvaev explains in the post.

Voluntary campaigns in support of the victims of the Karlovo villages were also organized by organizations such as "For the Good" (Za Dobroto), "Gorata.bg", "Predai Natatuk", National Association of Volunteers in Bulgaria, etc.