Unification Day: How Bulgaria Did Not Become a Russian Province 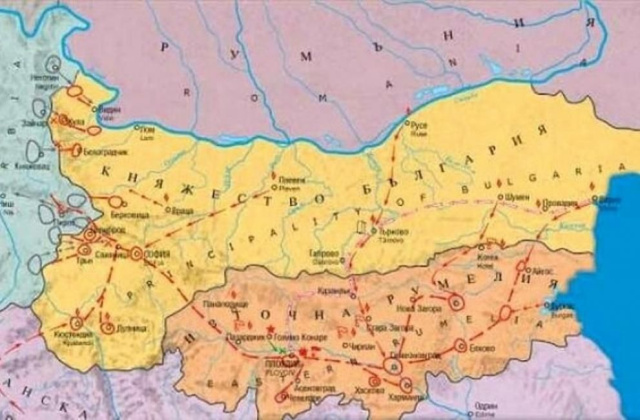 The Principality of Bulgaria united with Eastern Rumelia on September 6, 1885

"Next to the April Uprising and the struggle for the creation of the Bulgarian Exarchy, the Unification in the fall of 1885 is one of the rare bright events in Bulgarian history that can be said to be entirely the work of Bulgarians. What is kept silent and to this day by many Bulgarian historians, is that the Unification not only removes one of the injustices of the Berlin Treaty, but also puts an end to the threatening Russian hegemony in the newly resurrected Bulgarian state after five centuries of Ottoman rule," says Professor Plamen Tsvetkov.

He clarifies that until the Unification, the Minister of War of the Principality of Bulgaria, created in 1878, was necessarily appointed by St. Petersburg and was subordinated not to the prince (knyaz) of the Bulgarians, but to the Russian Imperial General Staff. The newly formed Bulgarian army was commanded by Russian officers and Russian was necessarily spoken in it.

It was the army that proved to be the pincers in the hands of the Russian Emperor Alexander the Third in his attempt to stop the Bulgarians from both sides of Stara Planina.

The Wrath of Alexander the Third

Learning about the creation of a united Bulgarian state announced in Plovdiv, Alexander the Third ordered the immediate withdrawal of all Russian officers from the Principality. The anger of the autocrat was caused by the danger that two long-considered ideas to impose Russian hegemony on the Balkans will fail.

"The conquest of Constantinople and the Black Sea straits was the star dream of the Russian Empire, and any talk of the noble thoughts of the imperial government towards the Bulgarians when they declared war in 1877 is simply ridiculous. The creation of a united and significantly stronger Bulgarian state, which may turn out to be an insurmountable obstacle to the intended expansion to the south, did not fit at all in the calculations of St. Petersburg. Alexander the Third entered into a sharp conflict with Prince Alexander Battenberg, as this was part of his plan to remove him from the throne, and for the Russian emperor to be declared the prince of the Bulgarians. Bulgaria was supposed to become an ordinary Russian province. The unification put an end to all these plans," explains Professor Tsvetkov.

The obstinacy of the Bulgarians infuriated the Russian diplomacy, which is why it resorted to a meanness, which in a particularly eloquent way reveals the designs of the imperial entourage. In a special declaration, Russia announced that it would not take any action against a country that felt harmed by the accession of Eastern Rumelia to the Principality of Bulgaria. This indulgence applies even if the "victims" decide to resort to military action. It is extremely clear that the addressee of the invitation to "appropriate" Bulgarian lands is primarily the High Gate. "But Sultan Abdul Hamid II decided not to go against Bulgaria. The Sultan was well aware of the intentions of his dangerous northern neighbor and decided that only the Russian side would be harmed by the Unification," says Prof. Tsvetkov.

Lessons from the Unification

"The date September 6 is the most suitable for a national holiday of Bulgaria because it celebrates an act of self-assertion and national valor, which is entirely the work of Bulgarians. Apart from this date, only Independence Day - September 22, 1908, has the potential to unite the Bulgarian nation", the historian Plamen Tsvetkov is categorical.

Philosopher Kalin Yanakiev points out in his turn that the Unification was made possible thanks to politicians and fighters for whom Bulgaria and its freedom were a supreme value. Yanakiev also recalls something else – that in 2013 (and soon in 2023) marked half a century since the attempt for another Bulgarian "unification", described in a telegram of the Politburo of the Bulgarian Communist Party (BCP) to Moscow from December 1963. It fervently proclaims the readiness of socialist Bulgaria to become the 16th Soviet republic.

"Remembering and making sense of such events is the only sure ‘litmus’ for whether we have learned lessons from our history," Professor Yanakiev concludes.

After the unification, Russia severed diplomatic relations with unified Bulgaria. Read more about this topic here.