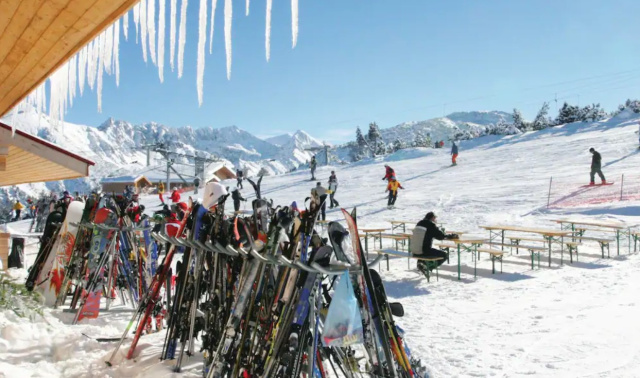 The World’s Most Popular Ski Resorts Revealed In New Study 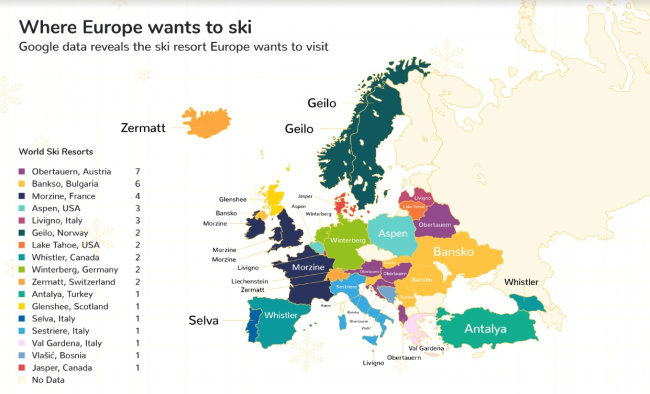 A new study by the travel experts at money.co.uk has revealed where the world wants to ski the most.

The research pulled a long list of over 1,100 ski resorts around the globe and analysed Google search data for everyone to reveal where the world wants to ski the most. This revealed that Bansko in Bulgaria is the most popular ski resort in the world, as it is the most Googled place for skiing in 11 countries. The countries wanting to ski in the Bulgarian resort the most are Israel, Kuwait, Northern Ireland, Qatar, Romania, Serbia, Slovakia, Slovenia, Tajikistan, and Ukraine. Bansko is located in Pirin National Park, it has quickly become a popular destination for those who love the slopes as it is such a snow-sure destination that is famed for having excellent quality snow even in the poorest seasons.

The second-most popular ski resort is America's Aspen, also known as Ajax, which is the go-to destination if you want to hit the slopes alongside A-listers and be surrounded by stunning scenery. It is the most popular ski resort in nine countries around the world; including, Belgium, Brazil, Kenya, Nigeria, Pakistan, Phillippines, Poland, Samoa, and San Marino.

Third is Austria’s Obertauern coming out as the most Googled place to ski for seven countries. Interestingly, all of the countries searching for skiing in Obertauern the most are in Europe, with Albania, Austria, Belarus, Croatia, Czech Republic, Finland, and Hungary all being the biggest fans of the Austrian resort.

Zermatt, in Switzerland, is fourth on the list; it is loved by skiers for its magnificent long ski runs, whilst foodies make the most of the vibrant culinary scene. Zermatt is the most popular ski resort for Senegal, Costa Rica, Iceland, Malaysia, Singapore, and (unsurprisingly) Switzerland.

Whistler in Canada is next on the list, being the favoured place to ski by Georgia, Indonesia, Laos, Liechtenstein, and Spain. Besides being internationally acclaimed for its skiing and snowboarding, it also offers guests snowshoeing, tobogganing and ski jumping at the venue which held the 2010 Vancouver Winter Olympics.

Canada appears three times in the most popular ski resorts list; Whistler is fifth, Banff is sixth with Morzine in France, USA’s Lake Tahoe, and Italy’s Selva, and Jasper and Big White are joint sevenths.

The World’s Most Popular Ski Resorts

Europe: Austria’s Obertauern is Europe’s most Googled resort to go skiing, topping the searches for seven countries that are all located within the continent; including, Albania, Austria, Belarus, Croatia, Czech Republic, Finland, and Hungary. Bansko is the second-most popular in European countries, followed by Morzine, which is favoured by Wales, England, Ireland and France.

Asia: Bansko tops the searches the most in Asia, being the number one resort for Israel, Kuwait, Qatar, and Tajikistan. Whistler is second being the top resort for Georgia, Laos, and Indonesia.

Africa: Aspen and Banff are joint first for the ski resort Africa most wants to ski in, as they both top the searches in two countries. Aspen is searched for the most by Kenya and Nigeria, and for Banff, it is Egypt and Ethiopia.

Oceania: Skiing in Aspen is the most popular resort for Samoa, for Australia, it is Falls Creek in northeastern Victoria, and for New Zealand, it’s Mt Hutt.

North America: Canada’s ski resort of choice one from home turf as Bromont in Quebec tops the Google searches, whilst Lake Tahoe is number one for the United States. Costa Rica is searching to ski in Zermatt more than any other resort, and for Mexico, it is Selva in Italy.

South America: Italy’s Selva is the destination where Peru and Uruguay want to ski the most, making it South America’s most popular ski resort.