Day 192 of the Invasion of Ukraine: The US denies Visa to Lavrov for the UN General Assembly 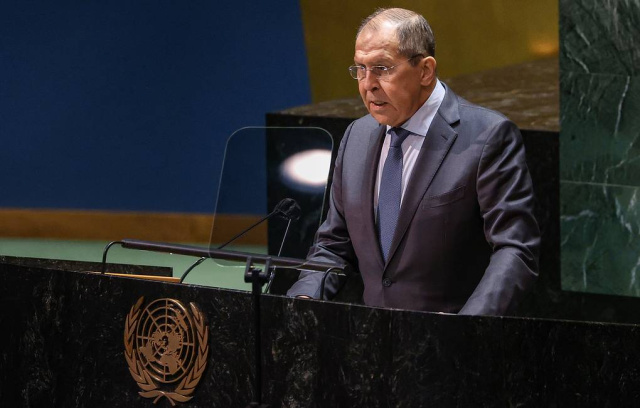 After the visit to the Zaporizhzhia NPP, the head of the International Atomic Energy Agency, Raphael Grossi, confirmed that two experts from the mission will remain at the plant.

“We saw everything we asked for”, Grossi said, expressing concern about military activity in the area. His biggest concerns are related to the "physical integrity", the power supply of the plant and the situation with its personnel.

The Zaporizhzhia nuclear power plant has been under the control of Russian troops since March but its operation, as before, is carried out by Ukrainian specialists. Moscow and Kyiv have been accusing each other for weeks of shelling in the area of ​​the facility.

Russian authorities in Zaporizhzhia said they foiled an attempted Ukrainian landing in nearby Energodar.

Moscow warned Washington not to send long-range weapons to Kyiv

Russian Deputy Foreign Minister Sergei Ryabkov has warned Washington against supplying long-range weapons to Ukraine, noting that the United States is teetering on the brink of direct involvement in the conflict.

He repeated that the so-called "special operation" will continue until its objectives are achieved.

During his visit to the Far East next week, President Vladimir Putin will also attend military maneuvers of the Vostok 2022 exercise.

The White House has asked Congress to grant Ukraine $13.7 billion in new aid. 40 billion have been approved so far.

Russia has requested 56 visas from the US so that Foreign Minister Sergey Lavrov and his delegation can visit New York to participate in the annual session of the UN General Assembly but so far has not received any of them.

In a letter to United Nations Secretary-General Antonio Guterres seen by Reuters, Russia's permanent representative to the world body, Vasily Nebenzya, said it was "disturbing" because, over the past few months, Washington had "consistently refused to grant entry visas" to a number of Russian delegates to other UN events.

The U.S. takes seriously its obligations as the host country of the United Nations, a State Department spokesman said, adding that under U.S. law, visa files are confidential information, so he could not comment on individual cases.

Under the UN's 1947 "headquarters agreement," the US is generally required to allow foreign diplomats access to the UN. But according to Washington, US authorities have the right to refuse visas for "national security, terrorism and foreign policy reasons".

"Every year we process hundreds of visas for Russian delegates to UN events," the State Department spokesman said, adding that applications should be submitted as early as possible so they can be processed on time.

"This is particularly true of Russia because of the unjustified actions it has taken against our embassy in Moscow, including the forced removal of local and third-country nationals who were working at our mission, which has significantly limited its staff and therefore its capabilities us for visa processing," the spokesman said.

Nebenzya indicated that the necessary documents have been submitted to the American Embassy in Moscow.

In the US, Russian diplomats at the UN and visiting Russian delegations are subject to a long-standing restriction that they cannot travel further than 25 miles (40 km) from New York without prior permission from Washington.

In February, the US sanctioned Lavrov, accusing him of being "directly responsible for Russia's unprovoked and illegal invasion of Ukraine." The sanctions freeze any of his assets in the US and prohibit US citizens from doing business with him.

The fifty-six visas requested by Moscow include those for a team of diplomats who must make preparations for the participation of Lavrov and his delegation in the general policy debates of the annual session of the UN General Assembly, which begins on September 20.

Nebenzya added that visas have not yet been issued for the journalists who will accompany the Russian minister, nor for the crew of his plane.

In the letter to Guterres, Russia's permanent representative to the United Nations cited recent cases of visa problems, one of which he said prevented Russian Interior Minister Vladimir Kolokoltsev from traveling to New York for a high-level meeting of United Nations police chiefs.

The UN is actively contacting the US on the issue of visas for the delegation of Russian Foreign Minister Sergey Lavrov for its participation in the general political debates of the annual session of the UN General Assembly. This was announced by the press service of the Secretary General of the United Nations, Antonio Guterres.

The comment was made in response to a TASS question about the problems surrounding the issuance of visa documents to Lavrov's delegation.

White House: Moscow is using energy as a weapon against Europe

Moscow is using energy as a means of pressure on Europe, the White House commented on the delayed resumption of the supply of blue fuel through the Gazprom Nord Stream 1 pipeline.

"Unfortunately, it is no surprise that Russia continues to use energy as a weapon against European consumers," a White House National Security Council spokesman said in an emailed response to a Reuters request for comment.

Russia has delayed the planned resumption of gas flows through the pipeline, deepening Europe's fuel supply problems for the coming winter.

The spokesman for the National Security Council at the White House added that the US and Europe are cooperating to ensure sufficient quantities of gas supplies.

"As a result of these efforts, Europe's gas storages will be filled by the start of the critical winter heating season," the spokesman said.

"These efforts alone will not be enough and we will therefore continue to work together on the troubling picture in the energy sector in Europe."

“United Russia” expelled 15 million members from the party, some of which liked positive statuses about Navalny

"The purge was carried out in June, and at one point the number of Russians who were members of it dropped from 25 million people to about 10 million," RBC quoted a source in "United Russia" and one of the party's deputies in the State Duma.

All "whose data had at least some doubts - telephone number, date of birth, etc." were excluded from the party, says a source of the publication about the screening methodology. With a special program that analyzes behavior on social networks, the "united-Russians", as the members and sympathizers of the formation call them, caught the members who liked statuses about the politics of Alexei Navalny. They were also expelled from the party.

After the cleansing procedure, “United Russia” plans to increase the number of its members, and by 2024 they should reach 30 million people. All MPs have been given plans to attract new members to be implemented by the end of this year.

For Duma deputies, who are elected by majority, the number they must attract by the end of 2022 is 1,500 people, and for those chosen by a list, proportionally, the plan is 500 people each. The deputies in the city councils must bring in 150 new members each.