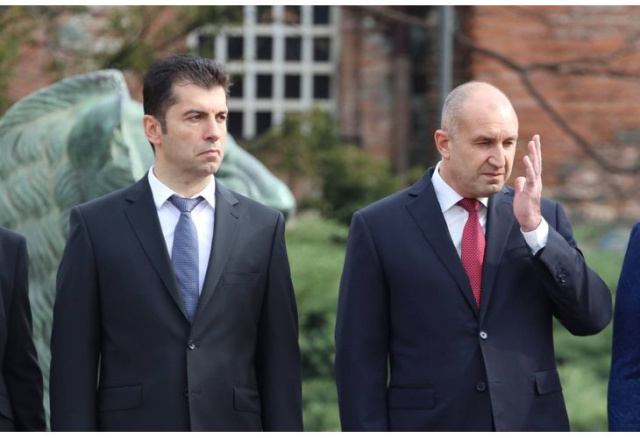 President Rumen Radev described as shocking the price of natural gas for September after returning from an official visit to the UAE. Yesterday, the Commission for Energy and Water Regulation (EWRC) decided that it would rise the price by nearly 19% compared to August and make it BGN 353.21/Mwh. Asked to comment on a statement by acting Prime Minister Gulab Donev that the government's work will be judged by the price of gas, the president stated that the tasks of the acting government are to hold elections and control inflation.

Radev emphasized that the "huge jump" in the price was due to two liquefied gas tankers contracted in July, when the “Petkov” cabinet and the previous management of Bulgargaz were still in power. He added that the price of gas from them is almost twice as high as declared by businesses and consumers to be extremely bearable.

At the press conference at which the official authorities declared negotiations for supplies from Gazprom inevitable, Deputy Prime Minister Hristo Alexiev, who is also the head of the crisis energy staff, indicated that the marginal price for them is BGN 250/Mwh. In a written position previously, some of the employers' organizations, including the Confederation of Employers, the Association of Industrial Capital, the Bulgarian Chamber of Commerce, indicated that it was achievable with supplies from the Russian company.

Bulgargaz did not disclose transactions for the two tankers in September. In May, during a visit to the US, Prime Minister Kiril Petkov contracted for two LNG tankers but the quantities were planned for June. According to data from "DESFA" - the Greek gas transmission operator and owner of the Revithoussa terminal, on September 8, 88,626 cubic meters of gas must be discharged to Bulgaria from the QOGIR tanker.

Today, Radev stated that supplies from Gazprom are one of the options that have not been exhausted but it must be clear that it is not the only solution and not at any price. He referred to the Ministry of Energy a question about the Russians' response to the Bulgarian proposal to resume supply negotiations, following the unilateral suspension since the end of April.

"It is a solution if good conditions such as price and rescheduling of deliveries are achieved," he said.

However, this is not the opinion of the Chairman of the Commission for Energy and Water Regulation, Ivan Ivanov, according to whom the quantities from the Balkan gas hub auctions, together with those from Azerbaijan and supplies of liquefied natural gas, can ensure favorable prices for consumers and fully cover the needs of the country.

The interconnector with Greece is expected to start operating on October 1, which will increase the supply of Azerbaijani gas. Earlier today, the regional minister assured that its construction will be completed on time.

Radev urged the parties not to draw "red lines"

On the occasion of the start of the pre-election campaign today, Radev asked for a working parliament and a stable regular government after the upcoming parliamentary elections.

He asked them to continue the policy of protecting citizens in conditions of crisis, which, according to him, the caretaker government is leading. Also to adopt the legal framework under the Recovery and Resilience Plan, as well as to implement reforms with a long-term horizon "that everyone expects"

"I hope that the parties have learned their lessons and in the campaign do not burn the bridges they will have to negotiate to form a government. The short life of the last parliaments and government is a clear indication of how far drawing continuous red lines, negative campaigns can lead us and the refusal of dialogue," said Radev.

He recommended the parties to conduct a campaign with an eye to the future, in the name of the interests of the society, as well as to be based on the facts and not to abuse them.