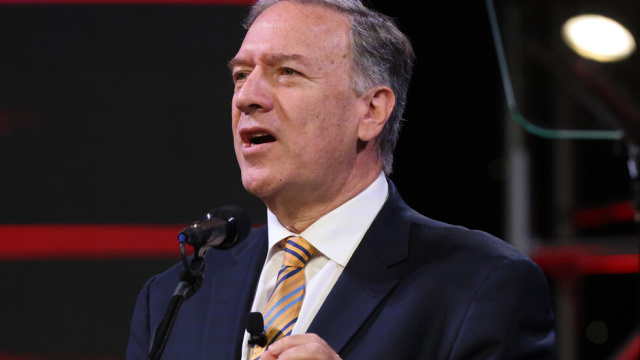 “Fracking technologies for extracting shale gas are much cleaner than Russian natural gas. Don't allow a handful of ill-informed activists who use arguments not based on facts to destroy your future,” former US Secretary of State Mike Pompeo said today in Sofia, quoted by BTA.

He spoke at a lecture organized by the Confederation of Employers and Industrialists in Bulgaria (KRIB) on the topic: "The geopolitical significance of Bulgaria: After the invasion of Ukraine and Bulgaria's potential as a regional energy leader".

"Just because you didn't give in to pressure to pay for gas in rubles, Russian President Vladimir Putin ordered the cartels to stop supplying you. The answer to your energy independence is not abroad, but here, including through the potential of shale gas extraction", Pompeo said.

The topic of shale gas extraction was relevant ten years ago. In the period 2010-2011, seven applications for search and exploration of oil and gas were submitted to the Ministry of Energy by two foreign companies - "Chevron Bulgaria Holding", with a stated interest in two areas in North-Eastern Bulgaria, and "Integrity Towers Inc.", with an application for a total of five areas, four of which are again in North-Eastern Bulgaria. However, in 2012, a moratorium was imposed on the extraction of shale gas by a decision of the parliament. After that, interest for it steadily declined.

"Oil and Gas Exploration and Extraction" JSC presents itself as "the only Bulgarian company carrying out the full range of activities for search, exploration, development and exploitation of oil and gas deposits", as well as the processing of crude oil into final products for the market, which is part of the structure of "Chimimport".

However, Rusgeocom BG, owned by "DD Management", whose majority owner is Sasho Donchev, also made an investment proposal to develop the "Spasovo" deposit, part of the "Dobrudja" block. In 2018, the Regional Ecoinspection in Varna refused to approve the proposal but this decision fell to the Supreme Court that year and opened new possibilities for possible studies.

On May 11, the former minister of economy and energy in the period 2009-2012, Traicho Traikov, told Nova TV that he had unofficial information from the services that the Russian state corporation "Gazprom" financed, through Brussels foundations, the protests against exploration and mining of shale gas in Bulgaria. In 2012, demonstrators protested in 12 cities against shale gas exploration and production.

He commented on data from an American report, according to which there are gas deposits in Bulgaria with 480 billion cubic meters (volumes suitable for extraction and commercial use are often several times lower) - more specifically in Northwestern Bulgaria. Traikov added that for the rest of Northern Bulgaria, the estimates were for deposits in the amount of 1 trillion cubic meters of gas. Ivan Hinovski, chairman of the Bulgarian Energy and Mining Forum, former director of the National Electric Company, recently presented similar data.

Traikov specified that when he became minister, the possibility of gas extraction in Bulgaria was still being studied. "Up until the big drama with shale gas and Chevron, they (the fracking company that was exploring) did not hide that they were going to use fracking technology to extract the gas," recalled the former minister of economy and energy.

The business that advocated for Gazprom supplies now supports democracy

Before the lecture, KRIB chairman Kiril Domuschiev stated that the organization has serious concerns about the current economic development in Bulgaria and the region in the context of the recovery after the COVID-19 epidemic and the impact of the war in Ukraine on the prices of natural gas and oil.

"We at KRIB have always supported democracy, free economy, Euro-Atlantic and trans-Atlantic perspectives for development”, Domuschiev said. He added that in previous years the organization has focused its efforts on promoting domestic production of shale gas to achieve independence from unreliable sources, including Gazprom.

His words are in contradiction with the official positions of the association, uniting part of the employers, including KRIB. On several occasions, they made comparisons between the prices of Gazprom and other suppliers in favor of the Russian company, stating that the higher prices were too much for them.

"If we were to take the stated quantities from Gazprom Export, their price for September would be around 131 USD/MWh or below BGN 250/MWh. Instead, we are looking for gas from an unknown source at prices 1.5 times higher! Similar actions are irresponsible to the national interest, doom the Bulgarian proceedings," the association wrote on August 12.

Europe needs to wake up, a British MP believes

During the lecture, British MP Mark Pritchard pointed out that the dangerous energy dependence on Russia must be ended. According to him, there is no doubt that Europe is facing an energy crisis. However, he believes that it can be eased in the short term, but other measures should be aimed at long-term stability.

"Energy infrastructure is crucial. It is critical infrastructure for every country. Assets in this area for part of the economic security of countries. Too often these national assets in Europe are in the hands of unreliable partners. The energy market in Europe is broken but it can be rebuilt and repaired for businesses and consumers to benefit from. There are too many European suppliers that have failed. We need to fix things because we cannot wait for well-meaning Russian leaders to twist the arms of the G7, as they do with Germany," said the British conservative. In his view, Russian energy interests are disproportionate and incommensurable, as well as excessively monopolistic. Their behavior is not commercial.

"It is high time Europe wakes up and shows Russia that it cannot hold us hostage as a continent," Pritchard noted.