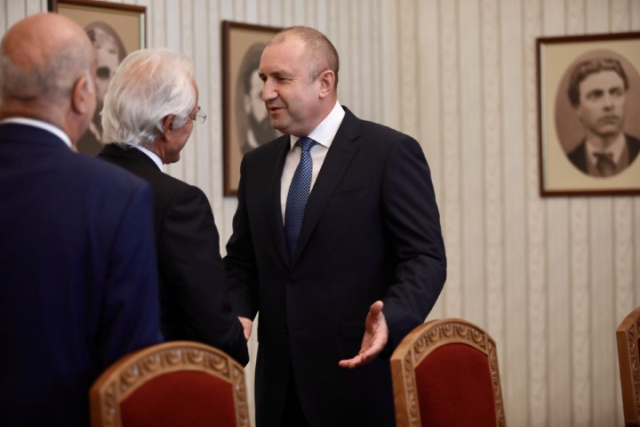 The caretaker government will open tenders for the supply of natural gas in the medium and long term as soon as possible. However, the decision to sign treaties will be left to the next regular government. This was announced by President Rumen Radev at a meeting with representatives of the management of the companies Gastrade and Copelouzos Group. They discussed the possibilities of increasing the quantities of natural gas for Bulgaria, which the country will receive through Greece through the terminal in the city of Alexandroupolis. The prime minister of the caretaker government, Galab Donev, the minister of energy Rosen Hristov, representatives of the management of Bulgargaz and Bulgartransgaz took part in the conversation.

Gastrade and Copelouzos are among the companies that developed the project for the LNG terminal in Alexandroupolis. The terminal, due to be ready in 2023, will provide new volumes of gas to supply regional markets in South-Eastern Europe. Companies from the US, Qatar, Israel are expected to be the main suppliers.

"For us, it is extremely important that the terminal be completed on time, as well as to consider the possibilities of increasing the supply of gas through Greece both in the mid-term and in the long term," Radev pointed out today, requesting the inclusion of Bulgaria in the management in the port of Alexandroupolis.

The vice-president of "Gastrade" Kostis Sifneos pointed out that increasing the capacity of the port is of strategic importance, and Bulgaria will have priority when reserving capacity. He emphasized that the country is in the middle of the road of supplies to Serbia and Romania, and hopes that they will also reach Ukraine.

The project is expected to contribute to the diversification of gas supply sources and routes, as well as to promote competition for the benefit of end customers. The planned capacity of the facility amounts to 6.1 billion cubic meters per year. Among the reserved capacity is "Bulgargaz" with 500 million cubic meters per year for the next 10 years, and Bulgaria is also a shareholder with 20% in the project. In 2021, the EU decided to allocate a grant of 166.7 million euros for it.

This is the second meeting on the subject of gas supplies that President Rumen Radev has organized this month. On August 12, he commented on the completion of the construction of the interconnector with representatives of the contracting company ICGB and the builder Avax. Then the Greek construction company gave itself a deadline until the end of August, or at the latest until September 7-8, to complete everything unfinished on the site and to obtain the necessary permits from the Bulgarian authorities. If the finishing works are completed on time, the interconnector should supply commercial quantities of gas from October 1.

Shortly after taking office, the caretaker government created an energy crisis headquarters. The reason was insufficient quantities of natural gas for the winter months. According to "Bulgargaz" accounts, the shortfall is 40% per month, including quantities from the tankers agreed by the "Petkov" cabinet. However, the crisis headquarters decided that Bulgaria would receive only one of the agreed 3+4 tankers with liquefied gas from the American company “Cheniere”. It will provide part of the consumption for October, and the refusal of the others was motivated by unsecured unloading slots and their high price, which would make the deal unprofitable.

Despite the words of Energy Minister Rosen Hristov that alternative supplies from Azerbaijan and Turkey will be sought as a priority, he defined as inevitable the negotiations to restore supplies from the Russian company Gazprom, with which Bulgaria has a contract until the end of the year, but from at the end of April, it did not receive the promised quantities due to unilateral termination of supplies from Russia.