US sends Two Warships through the Taiwan Strait, First Transit since Pelosi's Visit 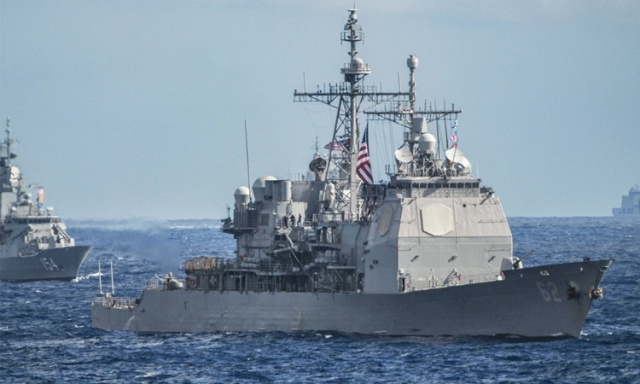 On Sunday, the guided-missile cruisers USS Antietam and USS Chancellorsville were making their voyage "through waters where high seas freedoms of navigation and overflight apply in accordance with the international law," the US 7th Fleet in Japan said in a statement as quoted in CNN. It said that the transit was "ongoing" and that there had been "no interference from foreign military forces so far."

"These ships (are transiting) through a corridor in the strait that is beyond the territorial sea of any coastal state. The ships' transit through the Taiwan Strait demonstrates the United States' commitment to a free and open Indo-Pacific. The United States military flies, sails, and operates anywhere international law allows," the statement added.

A 110-mile strait is a stretch of water that separates the democratic self-ruled island of Taiwan from mainland China.

Beijing claims sovereignty over Taiwan despite China's ruling Communist Party never having controlled the island -- and considers the strait part of its "internal waters."

However, the US Navy said that most of the strait is in international waters, CNN reported.

Even on Friday, after the visit of US Senator Marsha Blackburn to Taiwan, China commenced military drills in the seas and airspace around the self-governed island, Global Times reported.

According to information released by the Taiwan region's defense authority, eight PLA Navy vessels and 35 PLA aircraft were detected around the island on Friday, with 18 of the detected aircraft (SU-30, J-11, J-16, and J-10) having flown on the east part of the median line of the Taiwan Straits and the island's air defense identification zone (ADIZ).

The Eastern Theater Command pointed out that the actual combat exercise is a regular military operation organized in accordance with the changing situation in the Taiwan Straits.

"The PLA will resolutely safeguard national sovereignty and security as well as peace and stability in the Taiwan Straits," it stated.

Blackburn, a Tennessee Republican who sits on the Senate Armed Services Committee, arrived in Taiwan on Thursday. The latest US lawmaker's visit to Taiwan has upset China again. In a statement, Chinese Foreign Ministry spokesperson Wang Wenbin said, "the US lawmaker's visit to China's Taiwan region seriously violates the one-China principle and the provisions of the three China-US joint communique, and goes against the US's commitment of maintaining only non-official ties with the Taiwan region."

"There is only one China in the world and Taiwan is an inalienable part of China's territory. The government of the People's Republic of China is the sole legal government representing the whole of China," the Chinese spokesperson said.

Blackburn arrived in Taiwan after stops in Fiji, the Solomon Islands and Papua New Guinea. She was received by the director-general for North American affairs in Taiwan's foreign ministry, Douglas Hsu at the airport, The Hill reported.

Her visit comes in the backdrop of the US House Speaker's visit to Taiwan earlier this month. This trip was the highest-ranking US official to visit the island in 25 years.