Petkov and Vassilev: One of Us will be Prime Minister of Bulgaria after the Elections 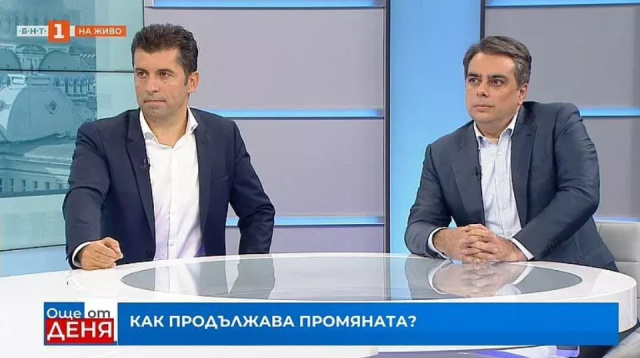 If "We Continue the Change" gets a chance to form a government after the elections on October 2, either Asen Vassilev or Kiril Petkov will be nominated as prime minister.

This was announced by the two in a joint interview with BNT. "We will decide together after the elections," said Kiril Petkov.

“Remember what the sociologists said last time? That we are 16%. And we were 25%. So when the sociologists give you data about ‘We Continue the Change’, add 10% and you will more or less hit the result”, Asen Vasilev said.

Petkov and Vassilev claim that just two days were needed for their government to complete the deal for the delivery of seven LNG tankers and the provision of slots for their unloading.

Kiril Petkov stated that he spoke with the Greek Minister of Energy yesterday, who told him that after the "We Continue Change" government left, there was no enthusiasm for taking slots at Greek ports.

“If it comes to an arbitration court, Gazprom will have to pay penalties to Bulgaria. Every day we send our request to Gazprom, the next day we receive zero. We want the gas and we don't get it. We make the payment to Gazprombank and they return it to us. If the official cabinet has stopped submitting the requests, this already puts us in default of the contract, but while we were in power, we submitted the requests every day in order to be in full compliance with the contract”, Asen Vassilev said.

"Even Todor Zhivkov did not allow himself to concentrate so much power as a presidential republic, but kept Bulgaria as a parliamentary republic". This is how Asen Vassilev commented on the proposal of the leader of "There Is Such a People" Slavi Trifonov for a referendum in which people could express their opinion on whether Bulgaria should become a presidential republic.

The former Deputy Prime Minister and Minister of Finance recalled that Trifonov initiated three referendums, after which he did not achieve anything.

According to former Prime Minister, Slavi Trifonov, he was a "Trojan horse" in the previous government.

Politics » Be a reporter: Write and send your article
Tags: Petkov, Vassilev, vote, We continue the change
Advertisement
Advertisement
Expats.bg All Are Welcome! Join Now!
Related Articles:
More from Politics