Day 184 of the Invasion of Ukraine: Europe narrowly Missed a Nuclear Disaster according to Zelensky 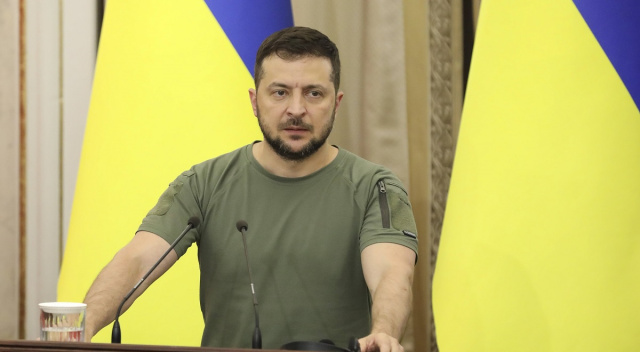 Ukrainian President Volodymyr Zelensky called on the International Atomic Energy Agency and other world organizations to force the Russian military to leave the territory of the Zaporizhzhia NPP. Washington demanded that Russia accept the introduction of a demilitarized zone around the strategic site.

Ukraine's president said the world narrowly avoided a radiation disaster after the Zaporizhzhia nuclear power plant's last external power line was restored. Earlier, the line was interrupted due to a fire in the area of ​​a coal-fired power plant, and the largest nuclear power plant in Europe was disconnected from Ukraine's energy system. Volodymyr Zelensky explained:

"Diesel generators started immediately to power the plant and keep it going after the shutdown. The world needs to know about the threat - if they hadn't kicked in and if the automation and our staff hadn't worked after the shutdown, now we would have had to deal with the consequences of a nuclear accident. Russia has put Ukraine and all Europeans on the verge of such a disaster."

Zelensky warned that the upcoming winter will be the most difficult in the history of the country due to high gas prices:

"Our state-owned companies are doing everything possible so that we are prepared to pass the winter season," the president assured. He described the situation in the southern part of Ukraine as a "humanitarian catastrophe" after many people there were left without electricity and water.

“Russia should agree to a demilitarized zone around the Zaporizhzhia nuclear power plant and allow international officials to assess the site's safety”, White House spokeswoman Karine Jean-Pierre said. The situation in the region was the subject of a telephone conversation between the presidents of the United States and Ukraine.

Earlier, the US State Department commented that "the electricity produced by the Zaporizhzhia NPP belongs to Ukraine and redirecting the electricity to occupied territories is unacceptable."

In Kyiv, 95 streets bearing Russian and Soviet names were renamed. Mayor Vitaly Klitschko pointed out that the new names should perpetuate the memory of significant historical events for Ukraine and famous people who glorified the country.

Zelensky warned Ukrainians about the most difficult winter in history

The upcoming winter will be the most difficult in the history of Ukraine due to high gas prices, President Volodymyr Zelensky said in an address to the nation.

He recalled that the price of blue fuel in Europe has risen above $3,300 per 1,000 cubic meters. Under these circumstances, Kyiv is trying to do everything possible to cope with winter preparations, the head of state assured Ukrainians.

"And it (the winter period) will really be the most difficult in our history," Zelensky said

Earlier, the Ukrainian authorities already announced upcoming problems during the heating period. For example, the mayor of Kyiv, Vitaliy Klitschko, warned the capital's residents about possible power outages. The politician assured that the authorities are ready to deal with such a situation with the help of fuel oil reserves but only for a short period of time. Klitschko also noted that the temperature in homes could drop below normal, so the mayor urged Kyiv residents to stock up on warm clothes and blankets.

For his part, the mayor of Lviv, Andriy Sadovy, called on residents to buy firewood because of the "unusual and difficult to predict situation" that, according to him, will occur during the winter in the territory under his jurisdiction.

According to Ukrainian media, this year's season for buying firewood in the country has started much earlier than usual, and the influx of buyers is felt in all forest farms.

"The minister confirmed to the other party Italy's firm support for Ukraine's territorial integrity, sovereignty, independence, and freedom, as well as the strong support for its European path and its future reconstruction," the ministry said on the website. Di Maio and the Ukrainian leadership discussed the political, financial, and humanitarian assistance provided by Rome to Kyiv, as well as the sheltering of Ukrainian refugees in Italy.

Ukraine attacks near Kherson, the Russian army with an offensive in the cauldron between Izyum, LPR and DPR

The Armed Forces of Ukraine have destroyed two Russian warehouses with ammunition and a communication center of the Russian army in the last 24 hours, the Operational Command "South" of the Ukrainian Armed Forces announced on Friday. This brings the number of ammunition depots destroyed since Monday to seven.

According to the operational report of the UAF (VSU), the Ukrainians completely destroyed the communication center of the 98th Airborne Regiment of the Russian Federation in the Kherson region and GLOC ground communication lines, 20 Russian fighters were killed. According to civilian Ukrainian officials, two command posts were also hit, one of which was that of the battalion technical group of the 33rd motorized rifle regiment.

"The enemy is concentrating its efforts to hold the occupied positions, continues the artillery bombardment with cannons and missiles, uses aviation and missile attacks," the Ukrainian command reported.

Yesterday, during the day, the Russian army carried out five attacks against positions of the Ukrainian Armed Forces on the battle line with the help of attack aircraft and a fighter jet. The personnel of the Ukrainian army has not suffered any losses, OC "South" claims. Moscow's army has carried out limited ground attacks northwest and northeast of Sloviansk, northeast and south of Bakhmut, and northwest of Donetsk. There was also a limited attack in the northwestern part of Kharkiv region and the northwestern part of Kherson region.

Command spokeswoman Nataliya Gumenyuk commented on Radio “Svoboda” (Freedom) on Friday that seven warehouses with ammunition and weapons have been destroyed since the beginning of the week, but specified that the week is not over yet.

"Ammunition depots are one of the priority targets of our artillery, particularly airstrikes, as these are depots that the enemy plans to use against our units. Although they are trying to deconcentrate these stocks since they have already felt that our interventions are spot-on and absolutely targeted, we find the places of their new dislocations and destroy them," Gumenyuk said.

For another night there is information about explosions around Kherson. Around midnight, local sources reported explosions in the direction of the Antonovsky bridge. The bridge structure has been compromised after several VSU hits, but the Russian army is building a pontoon facility parallel to the bridge for the transfer of equipment, ammunition and personnel.

The Institute for the Study of War (ISW) analyzed Russian tactics in recent days and summarized that the main efforts of the Russian army are concentrated in eastern Ukraine and aim first of all to encircle Ukrainian forces in the cauldron between Izyum and Donetsk and Luhansk regions. The Russians also conducted supporting attacks against Kharkiv and along the southern axis of the front. Geolocated photos of separatists from the so-called DPR planting a Soviet flag near the center of Peski show that the separatists have gained full control of the town and are likely launching an attack west of these positions.

Iran has already given Putin hundreds of combat drones

Russia has acquired hundreds of Iranian drones that could be used in the war against Ukraine, despite US warnings to Tehran not to send them, the Associated Press reported, citing Western intelligence officials.

It is unclear whether Russia has begun using the drones against Ukrainian targets, but they appear to be on alert and ready for use, the officials said, speaking on condition of anonymity.

The alleged delivery is another sign of what appears to be increasingly close military cooperation between Moscow and Tehran, the AP noted. That would make it even more difficult to continue negotiations to restart the 2015 Iran nuclear deal, from which the United States withdrew in 2018.

Faced with economic sanctions and restrictions on its supply chains because of its invasion of Ukraine, Russia is increasingly turning to Iran as a key partner and supplier of weapons, according to the AP. Last month, the White House publicly warned for the first time that Iran planned to supply Moscow with "hundreds" of armed drones. A few days later, they said Russian officials had visited Iran twice to negotiate the transfer.

In a speech last month, Iran's Foreign Minister Hossein Amir Abdollahian said Tehran had "various types of cooperation with Russia, including in the defense sector."

"But we will not help any of the countries involved in this war because we think it (the war) should be stopped," he added.