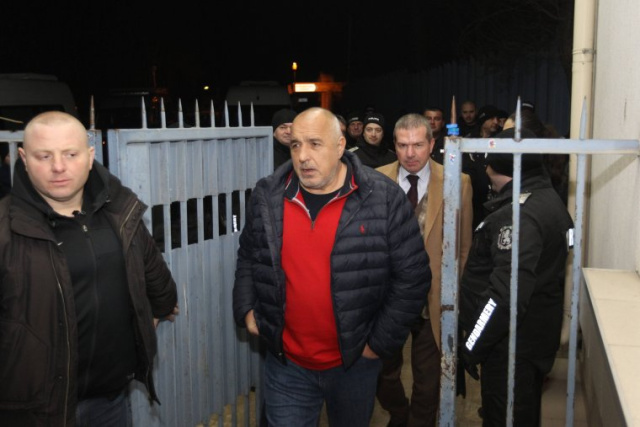 Borissov moments after his release from police custody

The order for the arrest of GERB leader and former Prime Minister Boyko Borissov is illegal, the Administrative Court in Sofia finally declared. The judicial panel upheld the decision of the Sofia District Court from April, which annulled the order for the detention of the former prime minister as illegal.

On March 17, Boyko Borissov, Vladislav Goranov and GERB's media advisor Sevdelina Arnaudova were detained and released the next day without being charged. They were taken by the police on the occasion of an initiated extortion proceeding, related to the businessman Vasil Bozhkov. The three are appealing their detention orders in court.

The detention order "does not meet the standard of legality and non-arbitrariness as fundamental general principles in limiting the right to liberty and security," the court's ruling said.

It cites the Constitution, stating that everyone has the right to personal liberty and security and that no one shall be detained, searched or subjected to any other invasion of personal security, except under the terms and conditions, determined by law.

According to the court panel, the applied coercive administrative measure of 24-hour detention, in addition to being "factually unfounded, also appears inconsistent with the purpose of the law." It is added that the detention order does not describe facts but only the number of pre-trial proceedings is indicated and a text from the Criminal Code is copied. The order does not specify "the facts that have taken place, which justified the need for the application of the coercive administrative measure".

The Metropolitan Directorate of Internal Affairs was ordered to pay Borissov the costs of the case in the amount of BGN 480.

At the beginning of July, in the first instance, the Sofia District Court canceled the order for the detention of Sevdelina Arnaudova, and already in April, the same decision was made for the arrest of the former Finance Minister Vladislav Goranov. So far, the reasoning of the courts is similar - the arrest warrants for all three were issued in substantial violation of the rules and are illegal.

Borissov, Goranov and Arnaudova were arrested on March 17 for 24 hours, and the three were released the next day without being charged. They were detained in the General Directorate of the "National Police" because of an extortion proceeding initiated on the allegations of the former gambling boss Vasil Bozhkov, who is hiding in Dubai. The three subsequently appealed to the courts against the police warrants under which they were detained.

Shortly after the arrests, prosecutors declined to seek permanent detention for the three and to press charges. Then the public prosecutor's office announced that they would repeat the actions of the internal department, since, according to them, the investigation was flawed. The prosecutor's office refused to carry out new searches but indicated that the investigation department of the Sofia City Prosecutor's Office will question people, whether they gave evidence in the case, and expert examinations will be appointed.