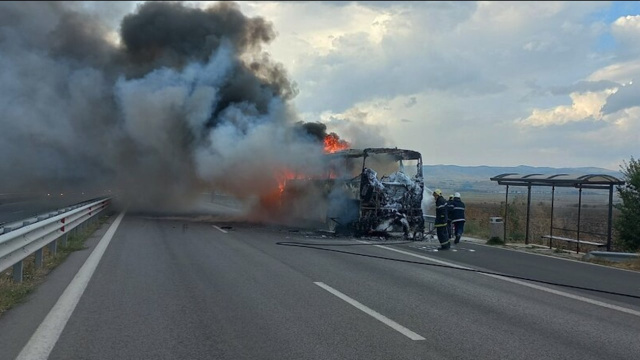 The caretaker government will discuss as the first item on its agenda the disaster situation in the municipality of Svoge because of the water supply problem, caretaker Prime Minister Galab Donev announced.

At the beginning of the meeting, he thanked everyone who did not pass the 217th kilometer of the Trakia highway on Sunday evening and stopped to help the children and adults in the crashed Serbian bus.

Donev expects the Ministry of the Interior to exercise serious control over compliance with road traffic rules.

The caretaker prime minister reminded the ministers of the old Bulgarian saying that when a car turns, they are many roads, but added:

"In this incident, however, the overturned bus became an occasion to see that the road is one and together we can cope even in the most difficult trials. The accident brought together people of different professions, places of residence, ages, even views, but they were together and helped people in trouble. I am impressed and grateful for the quick and adequate reaction of everyone who did not pass the 217th km of the Trakia highway on Sunday night, thinking: This is not my job”.

Donev thanked by name people who responded immediately after the crash, saying he was impressed by the quick and adequate lightning response:

"I am grateful to everyone who helped the young doctor, who began to assess the condition of the injured children and adults, to Dr. Anton Elkin, who joined the young doctor, to Teodor Bochev and Zhivko Stamboliev, who helped to remove the children from the bus and to all the other eyewitnesses to the accident who acted with thought and concern for the lives and health of the children. I am grateful to the teams of Emergency Service, to the treating doctors, to the nurses, to Traffic Police, to the local authority in Stara Zagora. Our hopes are that the children accommodated in Pirogov hospital will recover quickly".

The caretaker prime minister recalled his participation in the National Council of the Ministry of the Interior and again asked for control:

"From the Ministry of Internal Affairs, I expect serious control for compliance with traffic rules. To return our attention to life is our appeal to everyone because if we value life, our own and that of the stranger in the opposite lane, we will follow the law within us."