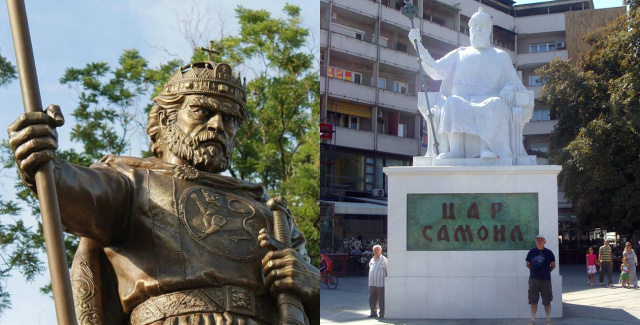 Tsar (Emperor) Samuil (Samuel) was the ruler of a large medieval state, which the majority of modern historical scholarship considers to be the Bulgarian Kingdom with a center in the territory of today's Republic of North Macedonia. This is stated in the official recommendations of the Joint Historical Commission to the governments in Sofia and Skopje for joint commemoration of personalities and events from our common history.

After the issue of Tsar Samuil was one of the most difficult to resolve between the two countries and after two years of negotiations, the commission stated that the medieval state of Tsar Samuil, which is considered the Kingdom of Bulgaria, covered most of the lands and population of the Balkan Peninsula and recommends that both parties celebrate Samuil together.

For the holy brothers Cyril and Methodius, the historical commission, composed of Bulgarian and Macedonian historians, states that "their work was developed in the literary centers of Preslav and Ohrid, which were then located on the territory of the medieval Bulgarian state, where their students found conditions for work". This, historians point out, gives reason for modern countries to celebrate the day of Cyril and Methodius together.

For St. Kliment Ohridski - that after the Great Moravian mission of St. Kliment he was sought by the "medieval Bulgarian state and in 886 he was sent by Knyaz (ruler) Boris-Mihail to the Kutmichevitsa region, where he laid the foundations of the Ohrid Book School". In 893, "by order of the Bulgarian Tsar Simeon, Kliment was ordained bishop of Veles".

Historians note that "St. Naum of Ohrid after the Great Moravian mission arrived in medieval Bulgaria. He was one of the founders of the Pliska-Preslav literary school. Around 893 he was sent by Tsar Simeon to Ohrid, where the educational activity of St. Clement continued."

Read the original document (in Bulgarian and Macedonian) here.