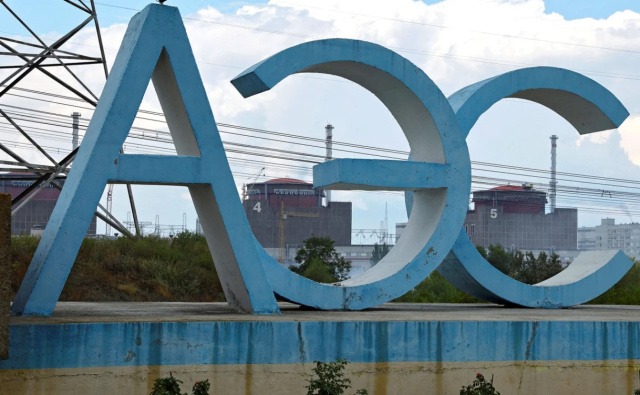 More than 40 countries have called on Russia to withdraw its troops from the Zaporizhzhia nuclear power plant and hand it over to Ukraine. This was stated in a statement published by the EU mission to the UN organizations in Vienna.

"The deployment of Russian troops and weapons at the nuclear power plant is unacceptable," said the document, signed by representatives of 42 countries, including all EU member states, as well as the United States, Great Britain, Australia, New Zealand, Norway, Japan and others. According to them, Russia's actions violate the safety principles that all members of the International Atomic Energy Agency (IAEA) are required to observe.

The statement said Russia must hand over control of the nuclear power plant to Kyiv and only then would the agency's experts be able to inspect the plant. The signatories also expressed their full support for the efforts of IAEA Director General Rafael Grossi to ensure the safety of the facility.

In recent days, Ukrainian forces have carried out several strikes on the territory of the Zaporizhzhia NPP, Moscow claims. In most cases, the attacks were repulsed by air defense systems, but projectiles were recorded that hit the infrastructure and the nuclear waste storage area. For its part, Ukraine claims that the attacks are the work of Moscow and are a method of "nuclear blackmail".

The Zaporizhzhia NPP is the largest in Europe and produces a quarter of Ukraine's electricity. The facility was captured by Russian forces in March of this year. The NPP is currently operating at 70% of its full capacity, as there is a surplus of electricity produced in the Zaporizhzhia Region. There are plans for future electricity supplies to Crimea.

Zelensky hints at possible extension of martial law in the future

Ukrainian President Volodymyr Zelensky said that in the near future the parliament will have to make a decision on the extension of martial law and general mobilization in the country:

"The stronger Ukraine is, the weaker Russia is, and therefore the less time this war will last, and everyone in Ukraine, everyone in the free world must do everything in their power and everything possible so that Russia and those who support the war will pay an ever-increasing price for Russian state terror."

The Ukrainian General Staff announced that the army had successfully repelled the offensive in five directions, while the Russian army continued to shell populated areas with tanks and artillery.

According to TASS, Ukrainian forces shelled a residential area of ​​Energodar. Russia also accuses the Ukrainian army of strikes against civilian targets in Donetsk and Makiivka.

Meanwhile, the first ship chartered by the UN left the Ukrainian port of Pivdenny with 23 thousand tons of wheat for Ethiopia. A total of 16 ships have already left Ukraine following the conclusion of the agreement brokered by the UN and Turkey.

Recent successes in Russian efforts to gain positions around Bakhmut are likely due to the activity of units of the private military company Wagner Group, which have been operating on positions in the area. The situation may change against the background of reports that on August 14, forces of the Ukrainian Armed Forces (VSU) destroyed a base of Wagnerians at approx. 40 kilometers from Bakhmut. This is according to the analyzes of the Washington-based think-tank "Institute for the Study of War" (ISW).

According to Ukrainian and Russian sources used by ISW, mercenaries from Wagner played an important role in the capture of Pokrovskoye, Klynove, Novolugansky and the Vaglegorsk power plant on July 26. Wagnerites are supposed to have a base in Popasna 40 kilometers from Bakhmut.

The leak of information about this base by a microblogger, who was there on August 9 and posted the above pictures on Telegram, allowed the VSU on Sunday to attack and destroy the base, ISW commented. This may affect the situation and the participation of "Wagner" in the hostilities in the Bakhmut region, analysts believe. The defeat of the base in Popasna was first reported by Russian Telegram channels, and the information was also confirmed by sources in Donetsk. The Ukrainians used HIMARS for the strike, the publication claims.

The Washington Institute indicates the directions in which the most active hostilities are taking place in Ukraine, as well as those that are a priority for the Russian Federation in its war against Ukraine.

According to the overview analysis of the institute, the occupiers and the Ukrainian forces are conducting active fighting in the Kharkiv region, as well as in the area along the Izyum-Sloviansk line; Sieviero-Lysychansk region; Bakhmut; the region of Avdeevka and Donetsk and in southern Ukraine.

ISW analysts note that the Kremlin prefers to advance its troops around Bakhmut and possibly to Siversk while trying to use the activity of the forces of the so-called DPR to seize territories that they have not been able to conquer before since 2014 in the area of ​​Avdeevka.

The high concentration of volunteer battalions around Izyum and Sloviansk suggests that the area is not the focus of Russia's attention and could be vulnerable to Ukrainian counterattacks.

The massing of VSU forces in the Kherson region could create significant difficulties for Russian command and control, especially if Ukrainian forces continue their counteroffensive there. At the same time, ISW noted that the composition of Russian troops in the southern direction is relatively diverse, compared to other directions.

UNIAN: The Russian army is fleeing Kherson, the military command has left the city

The majority of the military command of the Russian occupation troops in Kherson have left the city, the first deputy chairman of the Kherson regional council, loyal to Kyiv, Yury Sobolevsky, announced in the national television marathon in Ukraine, quoted by UNIAN.

Commenting on the operational situation in the region, and in particular that Ukrainian artillery has destroyed all the bridges across the Dnieper and now the Russians are transferring their entire command to the right bank, he said: “I can confirm that. Indeed, today the orcs do not have a single safe logistical route that would satisfy their military needs specifically to provide for the military group that is located just outside of Kherson.“ Sobolevsky confirmed that all arteries are under complete fire control of Kyiv.

"Apparently this became the main reason why the Russian military command actually left Kherson. Most of them have already left Kherson, that's what the reports are saying," added the deputy chairman of the occupied region. He also added that the Antonovsky Bridge, despite the attempts of the Russian occupiers to repair it, is now in such a state that it cannot be used even as a pedestrian bridge without great risk.

"Even as a pedestrian ford, it will be a great risk to the people if they (the Russians) open this bridge at all. It is closed to the public and civilians are not allowed near it to this day. There was already a large number of damages there, and after each successive strike of the VSU, they increase. They did try to make repairs, but all the repair was to remove the damaged coating and put a slab there and cover it with asphalt. The occupiers understand that at any time the VSU may stop their repair work. I am convinced that in military terms they will no longer be able to use this bridge," Sobolevsky added.

On Monday morning, the mayor of Melitopol before the Russian invasion, Ivan Fyodorov, announced that during the past 24 hours, Ukrainian guerrillas were southwest of the city on the railway bridge that the Russians used to travel between the area and Crimea. "This means a complete lack of echelons from the Crimean side," Fyodorov wrote in Telegram.