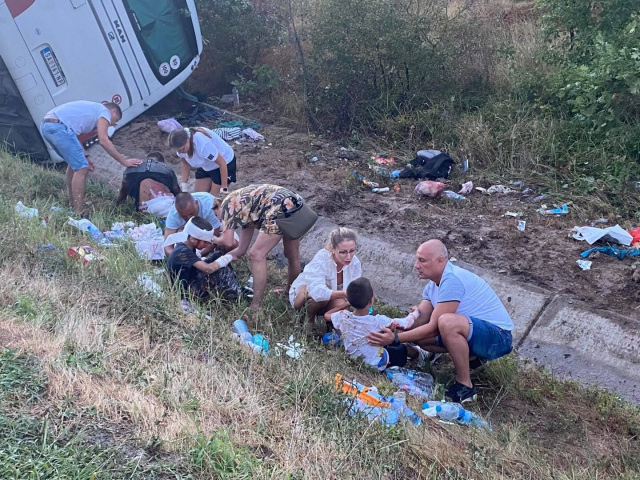 The scene of the crash on "Trakia" highway

A bus with children from the Republic of Serbia, who were returning from Bulgaria's Black Sea coast, crashed at km 216 on the highway "Trakia" in the direction of Sofia (about 20 km from Stara Zagora).

There are no casualties, only injuries.

On wet pavement, the bus turned on its side in the ditch. He has "plowed" tens of meters in the roadside bank. According to the deputy chief secretary, the vehicle was moving normally, but it gradually moved to the right outside the lane and ended up in the ditch. According to him, possible versions are driver fatigue or a technical malfunction.

A Serbian woman from the bus told the media what happened:

The group was returning from a folklore festival in Sunny Beach. The driver rested at Lukoil gas station before the 10th km and was in good condition. However, then one of the parents of children felt sick - he was suffocating and asked to sit in the front next to the driver. As the driver attempted to lower the right seat next to him, he did not know how to do so and lost control of the vehicle.

The injured were taken to the hospital in the regional center, as well as to Nova Zagora.

Two adults and 3 children were the most seriously injured

There is no evidence that the driver of the Serbian bus that crashed last night on the Trakia highway was under the influence of alcohol or drugs. 44 people passed through the emergency center in Stara Zagora. This was said by the Minister of Health, Prof. Asen Medzhidiev, who came urgently to the university hospital in the city to get acquainted on the spot with the condition of the victims.

Two adults and 3 children were seriously injured. One man has an amputated leg and 2 children are in intensive care - one with a concussion and the other with a broken pelvis. Experts are assessing whether an 11-year-old child with more serious injuries should be transferred to the capital for treatment. The Minister of the Interior announced to BNT that there is no evidence of an external cause for the accident. Most of the injured in the accident have bruises or fractures. However, all of them showed fear and stress from what happened.

"There was help, all the Bulgarian citizens who were on the highway rushed to our aid and the authorities, police and roadside assistance quickly came, the Bulgarian citizens helped us to get here, so we have received full support, ambassadors, institutions also got involved I don't know exactly, that's what I heard, we're fine now, I was a little scared, I was shaken, it was full of children," commented a woman from the crashed bus. 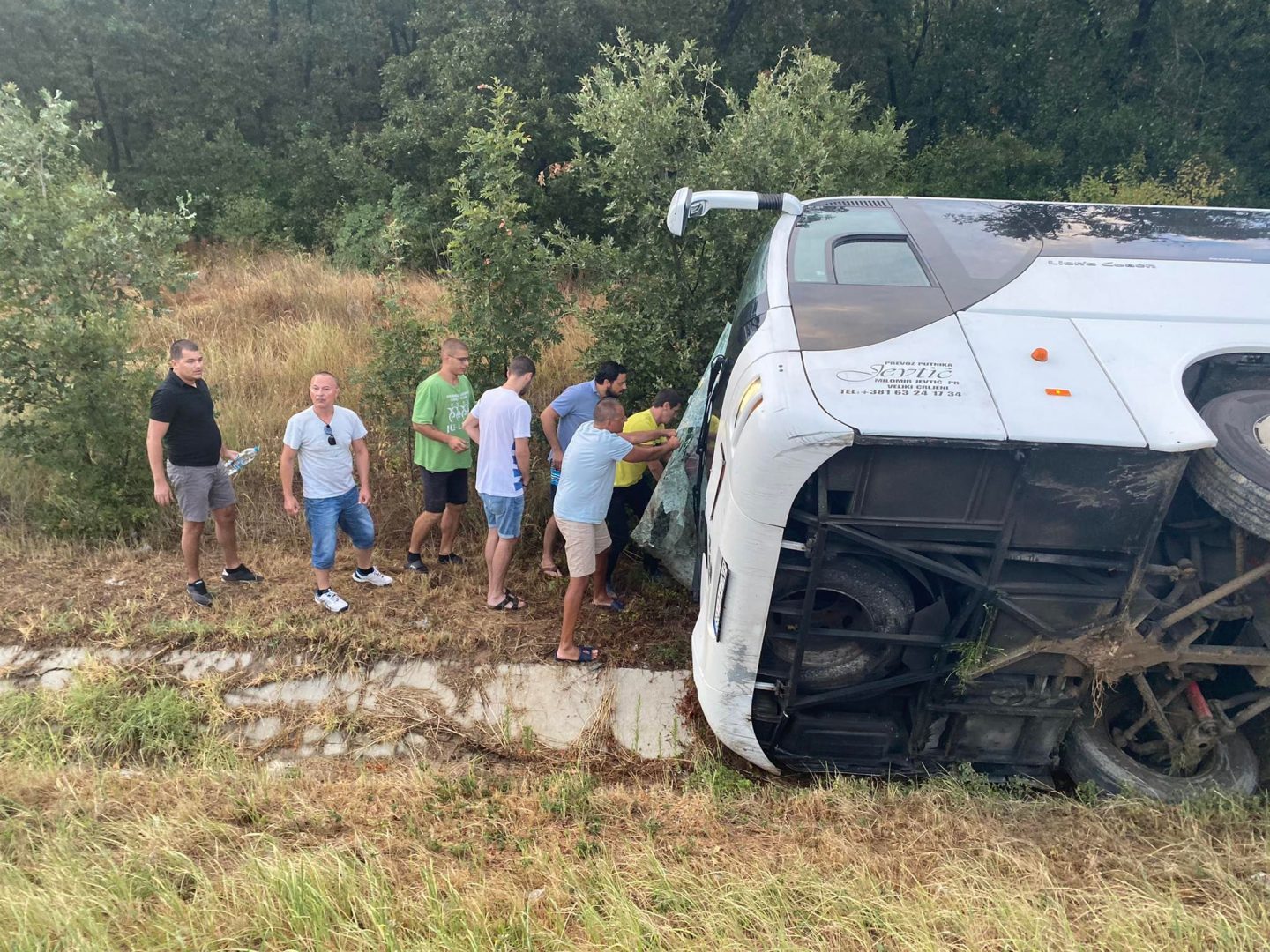 Two adults and 12 children remain for treatment in the hospital in Stara Zagora, the Acting Minister of Health Asen Medjidiev announced at a briefing this morning. The condition of the children is stable, except for two of them.

One of the children, for whom the doctors had great concerns, has been stabilized. He is conscious, but he is about to be operated on, which requires him to be transported with a team to a children's surgery in Sofia. The other more seriously injured child will be transported to the neurosurgery at "Pirogov" hospital in the capital.

At the moment, there is no danger to the life of the victims.

Oil and diesel have been spilled at the scene and traffic is expected to be restored once they have been cleared.

The driver was not injured, he was detained for 24 hours.

The appointment of numerous expertises is pending, as well as numerous documents to be requested from the Republic of Serbia.