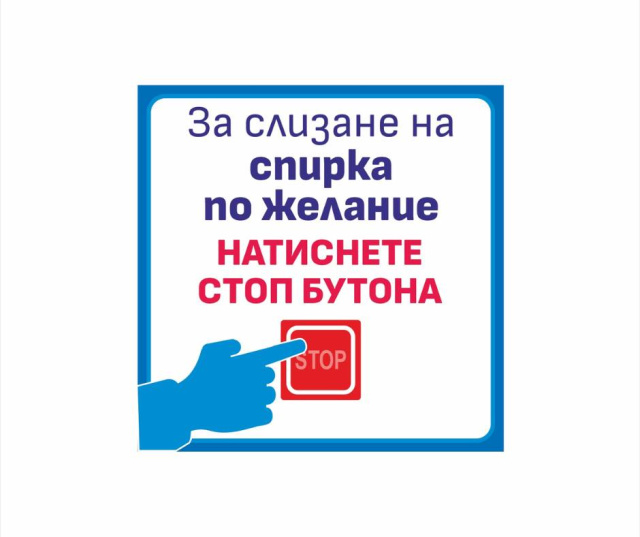 Stickers that will be put on buses and stops @www.facebook.com/KristianKrstevKristianKrastev

The Sofia Municipality is introducing stops "on request" from today, August 13 - this was announced by the Deputy Mayor for Transport of Sofia, Kristian Krastev on his Facebook profile.

Passengers on buses 1, 3, 4, 26, 27, 42, 58, 59 and 63 should know that they need to press the "stop buttons" in order not to miss the stop they want to get off at. In addition to passengers having to press the button, drivers also have a responsibility to keep track of where there are people to pick up or drop off.

All "optional" stops will be marked with stickers. The vehicles will also be affixed with stickers showing how the driver is notified when there is a need for a stop.

On the website of the Center for Urban Mobility, in the "Timetables" section, information will be published about each line on which there are "optional" stops.

"In the fall, I will propose to the Sofia Municipal Council that all stops on the territory of the Sofia Municipality become ‘optional’ following the example of a number of European countries," Krastev points out. “The goal is to increase the average speed of public transport, which will optimize both the timetables and the costs on these lines,” adds Krastev and explains that by skipping stops, bus lines have already been accelerated and the travel time on them is decreased by up to 10 minutes.