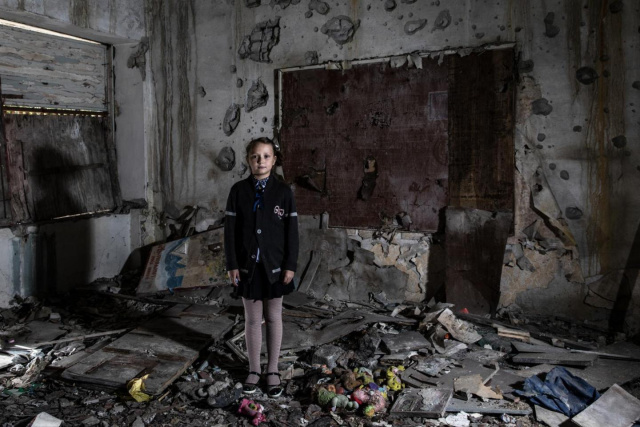 UN chief Antonio Guterres has proposed the creation of a demilitarized zone in Zaporizhzhia amid fears of a nuclear disaster. It comes amid continued accusations between Russia and Ukraine over the shelling of Europe's largest nuclear power plant and reports of new attacks in the area around it.

At a UN Security Council meeting convened to discuss the situation, the head of the International Atomic Energy Agency, Rafael Grossi, said the agency should be allowed to inspect the Ukrainian nuclear power plant in Zaporizhzhia, pointing out that the fighting near the site had caused "serious" crisis.

UN Secretary-General Antonio Guterres also said what was happening could "lead to a catastrophe".

Washington has also previously called for a demilitarized zone around the facility.

However, Russia's UN representative said this was not an option as it would make the plant more vulnerable to "provocations" and "terrorist attacks".

Ukraine claims that Russia turned the site into a military base to launch attacks from there, knowing that Ukrainian forces were unlikely to retaliate. Moscow denies the claim.

"No one else has used a nuclear power plant so obviously to threaten the whole world, as well as to set conditions. Absolutely everyone in the world must react immediately to expel the occupiers from the territory of the Zaporizhzhia nuclear power plant. This is a matter of global interest, not just a Ukrainian need," Zelensky said.

Meanwhile, former Russian President and current Deputy Chairman of the Russian Security Council Dmitry Medvedev, accompanied by other senior Russian officials, visited a pro-Russian separatist region in eastern Ukraine, calling for further rapprochement with Russia. Medvedev spoke in Luhansk with the leaders of the Luhansk and Donetsk separatists.

Medvedev's visit comes amid suspicions that Moscow is preparing to annex large parts of Ukraine.

UN: Children with disabilities are abused in orphanages in Ukraine

Children with disabilities are being abused and neglected in institutions across Ukraine, UN experts have warned.

Human rights activists said the war had worsened their situation and called on the Ukrainian government to correct its "historical mistakes".

Their statement comes after a BBC News investigation revealed widespread abuse in the country's orphanages.

Before the war, over 100,000 children and young people lived in the homes.

When Russia invaded in February, thousands of disabled people were removed from institutions and sent back to their families.

UN experts say they are left without any proper support, putting them at risk of further abuse, living on the streets or becoming victims of trafficking.

However, thousands of people still live in the vast network of nearly 700 institutions in Ukraine. Although these places are called "orphanages", 90% of the people living there have families.

They are victims of the Soviet-era system that encouraged parents to hand over their disabled children to the state.

Many people in Ukrainian society believed and still believe that children with disabilities receive better care in an institution.

One of the experts, Gerard Quinn, the UN's special rapporteur on the rights of people with disabilities, said it was a problem that long predated the war - and it was time for Ukraine to hit the "reset button".

"All wars reveal historical mistakes, and institutionalization is one of them," he said.

"It is time to act, to press the back to the future button. To do this, we need a clear commitment from the Ukrainian government to end its system of institutionalization."

He said that in rebuilding Ukraine, people with disabilities must be a priority - and the countries and organizations that will help finance this must put funds into supporting the community, not into continuing the life of institutions.

Has Russia taken much of Ukraine's natural resources?

The ongoing six-month war in Ukraine is also being fought over its natural resources - this is stated in a publication of the newspaper "Washington Post".

Russia has managed to capture some of the most oil-rich parts of Ukraine. The country has large reserves of titanium and iron ore, as well as lithium and coal.

Resources mined in Ukraine are used in a number of sectors, including the production of aircraft parts and smartphones.

Currently, Moscow has succeeded in depriving Kyiv of much of its own resources, which is greatly weakening the Ukrainian economy.

According to the "Washington Post", however, even if Russia begins to extract the resources from the occupied territories, it is unlikely that it will be able to easily find a market for them.

It is also recalled that when the Crimean peninsula was annexed in 2014, the Russian army flooded a large part of the coal mines so that they would become unusable if they returned to Ukrainian control.

Ukraine: US must impose sanctions on all Russian private banks

Oksana Markarova, Ukraine's ambassador to the US, has asked the US Treasury Department to impose sanctions on all Russian private banks. She said this in an interview with the Bloomberg agency.

"Sanctions play as important a role as weapons," the diplomat said.

At the same time, she noted that an exception can be made for some banks. The ambassador called on the State Department to include Russia in the list of countries sponsoring terrorism.

In his daily video address to the Ukrainian people, President Volodymyr Zelensky called for operational silence and restraint in statements on military topics concerning Ukraine's goals and tactics in the war against the Russian occupier. Aimed in general at the nation, this fragment of his statement was addressed more to the high-ranking representatives of power, who in recent days have been enthusiastically commenting in interviews and social networks on Kyiv's plans for the next stage of the war.

"I want to note something important to all representatives of the state and local authorities, the military sphere, who comment on the events at the front, the defense plans of the command, the preparation of specific operations, etc. The general rule is simple: War is not a time for vanity and loud statements," said Zelensky.

According to the Ukrainian head of state, the less concrete details are "voiced" about Ukraine's defense plans, the better it will be for their implementation.

"If you want to leave behind bright headlines, that's another job, frankly irresponsible. If you want us to win and you want a victory for Ukraine, that's another thing, and you should feel your responsibility for every word you say about what our country is preparing for its defense or counteroffensive," President Zelensky emphasized.

Volodymyr Zelensky's visible irritation comes amid Deputy Defense Minister Anna Malyar's statement on Thursday that the Security Service of Ukraine is investigating a leak of information about the plans of the Ukrainian Armed Forces, which occurred because of a statement in an "interview of a high-ranking military for a known edition.'

Malyar did not directly name who it was about, but very recently the online edition of RBC Ukraine published an interview with General Dmytro Marchenko, in which he commented on the strikes of the VSU on the bridge of the Kakhovskaya HPP, the possible advance to Kherson and again touched on the topic of the importance of the strike on the bridge, connecting Crimea with Russia. According to “Babel”, the law enforcement authorities are investigating Marchenko's interview.