Bulgarian Economy Minister: I will Approve All Arms Deals that are OK. I cannot Restrict Exports to any Country 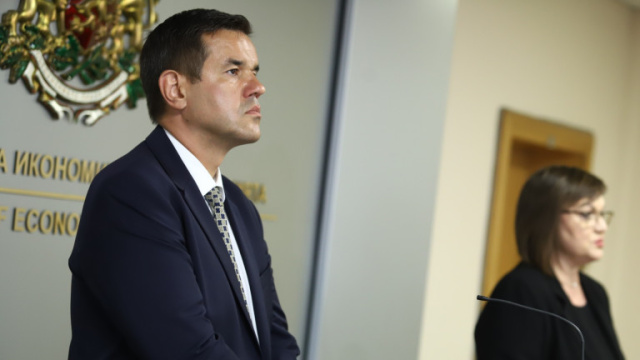 “I will sign all the gun deals that are OK. Now an awful lot are blocked - over 250 for over a billion BGN, because the previous management team at the Ministry of Economy did not follow the law. I cannot restrict exports to any country. This could have been done by the regular government with a parliament behind it”. This was stated in an interview on Nova TV by the Acting Minister of Economy, Nikola Stoyanov, who succeeded Kornelia Ninova in the post.

Already at his first press conference, the caretaker minister stated that a bomb had been planted in front of 230-240 arms deals for over 1 billion leva, which former minister Kornelia Ninova did not move. Today, Minister Stoyanov stated:

"There are an awful lot of transactions blocked. There are already over 250. This week I will unblock the process. They have been waiting for a month and a half. This is not only export, there is also import, materials. Enterprises cannot work. The entire military-industrial sector is blocked in this way".

He said of his predecessor's behavior:

"I cannot explain why there was this passivity and why the former minister allowed these things. I spoke to the experts from the commission. I asked them: ‘Weren't you ready until now? What happened?’ They told me: ‘No, we were ready on time. We informed the management, they refused’. I have no explanation. By law, there is a 30-day period. They did not comply with the law".

“I have never accused Mrs. Ninova of exporting weapons to Ukraine” - Stoyanov pointed out in response to a question about criticism of her predecessor. “I am put in a situation to sign these documents, which have already been accepted.”

Will he allow arms exports to Ukraine?

“The regular government, with the parliament behind it, could have decided to limit exports to some countries. We currently do not have that option” - answered Stoyanov. – “I have the following choice: either comply with the law and sign the documents, which are correct, where the documentation is correct, or to make an administrative arbitrariness and refuse them, delay, stop, to say that I don't want to, like she did (Kornelia Ninova), which I will not do. I lead my business entirely using the law and I will uphold it as it is”.

“I say again, the trade deals are already in, accepted as such. I can only sign them or not. I will follow the law – the ones that are OK, I will sign them.”

“She (Ninova) knows what will happen: either I will obey the law or I will not obey the law. I am an expert and I will follow the law. She allowed herself not to follow it not only in this case, but also in many others in the ministry, but I'm not like her”.

Nikola Stoyanov was dismissed by Ninova from the board of VMZ-Sopot at the beginning of June. On this occasion, today he commented that he was appointed as an expert "and not because I was fired by the lady, the former minister".

When asked, in connection to the many transactions, what Bulgarian military production was being sought, he replied:

"We export products from our military-industrial complex. Whatever there are customers for, that's what we export. It's not just to Poland, to many other countries. We import many other things to keep our enterprises working. Keep in mind that behind these deals thousands of jobs are at stake.

Ammunition is most wanted."

Is the president interfering?

"The president in no way interferes in my work, nor has he called me to tell me anything. I have never heard from him. This bias, that he sets the tone in the work of the ministry, is untenable," said the acting minister.

Regarding the risk of reduced supplies and the situation in Bulgaria, he reassured that in our country 3 to 4% of the population uses gas, while in Germany, for example, it is 60%. Natural gas also accounts for a small share of our industry. In addition, Bulgaria is a large producer of electricity.

"Here, the question of whether there will be electricity or not is not at all that painful, rather there will be electricity. The question is at what price. The question is that in the surrounding countries - this is what I hear from businesses - electricity for businesses is cheaper than this in Bulgaria. In order to equalize the competitiveness of enterprises, this implies aid. The question regarding electricity is more financial. With gas, the problem is whether it will really be available, but I am sure, colleagues are working hard, that they will be able to provide it. This calmer situation in Bulgaria compared to Western Europe is due to the fact that we use much less gas in percentage compared to them."

The formula for providing business benefits, inherited from the regular government, will change - it became clear from Stoyanov. The current approach of giving "in cash" is not effective, the minister believes.

"It is not a question of whether they are bigger or smaller, the question is to help those who are in need. My conversations were also in this direction. We start next week in an expert group of conversations with all participants in the business on the topic how do we work out a formula to help those in need Because even now, when it's being handed out like the electricity subsidies were, I have signals that there are companies that have record revenues and at the same time also they get (assistance for) electricity not because they are abusing. It’s different. Not because they are abusing, just the rules are like that - it is given to everyone, but for some in this crisis the production is in high demand, the prices have risen a lot," he said.

After SANS entered "Kintex" yesterday, today the minister admitted that he was very disturbed and commented that the services asked the ministry for information based on a signal that was also received in MIE.

"Just yesterday I ordered all available information to be passed on to them. I am very concerned. Yesterday I found out from the executive director of the DCC that SANS are in Kintex. I very much hope that the checks will show that everything was in order, but I am concerned because I know that services don't just come into any enterprise," he said.

When asked if the signal came from him, he denied it three times, saying: "No, no, no."

72 people from the structures of the Ministry of Economy were released by the previous minister. On this occasion, her successor Stoyanov pointed out that they are nearly 20% of the composition of the department and defined the percentage as "very serious".

"I will look at each case one by one regardless of any action. You see the DCC executive has been sabotaging the process all along, lying - I hadn't told her this or that, she allegedly had called me. Total lies! I haven't fired her yet though. I can sign her termination now, right away, I have the authority, I have not fired her," Stoyanov noted and to the question, "Will you fire her?" replied, "I'll see when I get to know more about the situation."