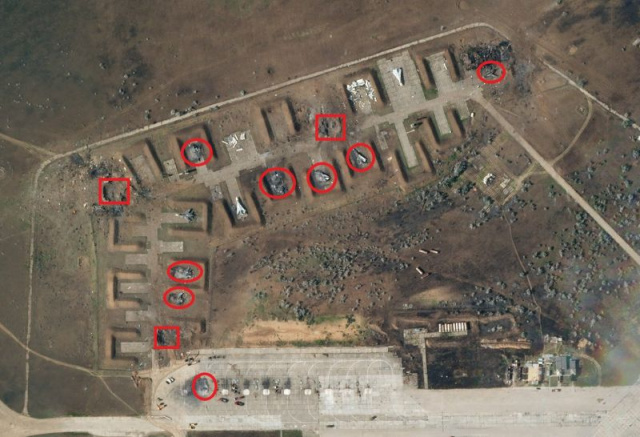 Satellite pictures from the satellites of the company "Planet" after the explosions in Saki.

Active fighting is taking place in the southern parts of the country. Ukrainian forces report that they have damaged one of two bridges over the Dnieper River.

Dozens died in massive Russian shelling in Dnipropetrovsk region. According to pro-Russian separatists, Russian forces have entered the towns of Soledar and Bakhmut. Satellite images show heavy damage after the series of explosions at the Saki airbase in Crimea.

Kyiv has not taken responsibility for the explosions, and the Russian side claims that the cause of them was a fire that occurred due to non-compliance with fire safety measures. At least 9 aircraft were destroyed.

A donor conference for Ukraine will be held today in Copenhagen. In his late video address, President Zelensky said that Kyiv would receive aid, including more weapons.

"This is the question that worries everyone: when will the war end? Some say months, others - a year, and more. In fact, the question of time is directly related to the question of the losses that Russia will suffer. The greater the losses of the occupiers, the faster we will be able to liberate the country and guarantee the security of Ukraine. The time will come when the occupiers will flee from Kharkiv, from Donbas, from Crimea," said the Ukrainian president.

The first ship transporting Ukrainian corn arrived today in the Turkish port of Mersin, according to online maritime traffic tracking pages, and found a new buyer for its cargo, an information site reported, cited by AFP.

The ship "Razoni", sailing under the flag of Sierra Leone, left the port of Odesa on August 1 and headed for the Black Sea with 26 thousand tons of corn on board. It was scheduled to arrive at the Lebanese port of Tripoli on Sunday. However, the five-month delay in delivery led the buyer and the shipper to reach an agreement to cancel the order, the Ukrainian embassy in Lebanon said in a statement yesterday evening.

According to marine traffic tracking sites, the Razoni docked in the Turkish Mediterranean port of Mersin last night.

The information site "Middle East Eye" announced that a new buyer was found in Turkey for the transported corn. According to Ahmed al-Fares of the Ashram maritime agency, quoted by the site, "the cargo has been sold and will be unloaded in Mersin."

The resumption of Ukrainian grain exports became possible after the signing of an agreement by Russia and Ukraine with the help of the United Nations and Turkey, the aim of which was to limit the global grain crisis.

UN envoy Frederik Coene, who is in charge of enforcing the agreement, also confirmed today that wheat exports will begin next week after ships loaded with corn and blocked at Ukrainian ports since the beginning of the Russian invasion were able to leave. "We are seeing a steady increase in the number of ships arriving and departing. This is a good start," he added.

Russia does not accept "unfriendly" Switzerland to represent Ukraine

Ukraine would like Switzerland to represent its interests in Russia, but Moscow must give its approval for such an agreement to enter into force, the Swiss Ministry of Foreign Affairs announced today, as quoted by AFP.

At the start of Russia's offensive in Ukraine, Switzerland offered its mediation to both sides, the Swiss foreign ministry told AFP in May. Kyiv has accepted this proposal.

"Ukraine wants Switzerland to take over the powers of a protectorate representing its interests in Russia. Negotiations on this topic have ended," the foreign ministry told AFP, confirming information published by the Swiss daily Luzerner Zeitung. However, for protectorate powers to take effect, Russia must give its consent.

However, Moscow believes that Switzerland is no longer a neutral country since it joined European sanctions imposed on Russia over its invasion of Ukraine. The press service of the Russian embassy in the country commented to the TASS agency that Switzerland has expressed its readiness to represent Ukraine, stating that "they have not had any contact with the official authorities in the confederation on this issue." From there they also reminded that already on March 5, "Switzerland was included in the list of unfriendly countries together with the EU member states and some other countries. In this context, from our point of view, it would be difficult to talk about anything was Bern's mediation regarding Ukraine," the embassy added.

In cases where two countries break their relations in whole or in part, Switzerland usually offers to perform some diplomatic or consular services, invoking its neutrality. The representation of the interests of certain countries by a patron state allows those countries to continue to maintain minimal relations and guarantees consular protection for the citizens of each of them in the territory of the other.

The role of mediator Switzerland assumed for the first time in the 19th century, when it represented in France the interests of the Kingdom of Bavaria and the Grand Duchy of Baden during the Franco-Prussian War of 1870-1871. Switzerland's activity as a state representing the interests of parties in conflict, reached its peak in World War II, when it performed this role for as many as 35 countries. The Alpine country today represents less than ten countries.

Zelensky called on his compatriots under Russian occupation to rise up

Ukrainian President Volodymyr Zelensky called on his compatriots in the Russian-occupied parts of the country to rise up.

In his traditional video address, he again accused Russia of terror and added that the attacks on civilians in the Mykolaiv and Kharkiv regions once again proved the need to increase military aid to Ukraine.

“The armed forces of Ukraine, intelligence and law enforcement agencies will not leave the Russian shelling in the Dnipropetrovsk region unanswered”, said Zelensky, who also appealed to the residents of the occupied territories with a call, if they have important information about the enemy, to report it to the Ukrainian military and special services.

"The more losses the occupiers suffer, the sooner we will be able to liberate our land and guarantee the security of Ukraine. This is what everyone who protects and helps our country should think about," Zelensky said.

A conference of the defense ministers of the countries that support Ukraine begins today in Copenhagen. They will discuss new military aid to Kyiv.

Also today in New York, the UN Security Council will hold an extraordinary meeting on the crisis surrounding the Zaporizhzhia nuclear power plant.

Kyiv and Moscow accuse each other of bombing Europe's largest plant over the past weekend.

Mikhail Ulyanov, who is Moscow's permanent representative to the International Atomic Energy Agency, told Russian state television that the radiation damage zone, if the plant did suffer damage, would cover territories within a radius of 5,500 kilometers - that includes most of Ukraine, parts of Russia, Turkey, Romania and Bulgaria.

High-resolution satellite images show colossal damage at the Russian Saki air base in occupied Crimea, and in just one of the photos, 8 completely destroyed Russian aircraft can be distinguished. The first footage appeared as early as 10 p.m. Moscow time on the profile of a student researcher of open satellite sources on Twitter, and it was only at night that they were confirmed by experts involved in analyzing the war in Ukraine.

The footage from the satellites of the company “Planet”, which can be compared with the photos taken a few hours before the explosions in Novofedorivka, show the complete destruction of the stands where Russian fighters and bombers were located. Questions in the expert community have raised three large craters of approximately the same shape and size (over 20 meters in diameter) located at the four corners of one of the airport's runways, as well as a smaller one halfway between two. One crater is on the site of an already destroyed building that served as a warehouse for equipment or ammunition. At a distance from it so as to form a triangle, inside which the planes remain, there are two more craters caused by an explosion, and inside this triangle all the planes are destroyed, actually peeling the hulls of only two machines.

First unrectified images of Saki Air Base in Crimea via @planet following yesterday's multiple explosions. There's clearly been a massive fire across the base following whatever happened there: pic.twitter.com/vQJa6ljMEv

According to OSINTtechnical, after comparison with the original photographs, 3 Su-30s, 4 Su-24s and one Su-27/30 can be considered downed. This is 100 percent damage only to the stands where the Sukhoi fighters were located. It is very possible that these machines, which appear intact on the satellite image, were also lined up in such an impact. The destroyed battle fleet belonged to the 43rd Independent Marine Regiment of Assault Aviation, which the Russians used to shell Ukrainian cities.

The three craters, given their shape and location, almost unequivocally lead analysts to the hypothesis that they were not caused by rocket strikes, but by aerial bombs. The pictures contain both precisely liquidated planes (and two at least outwardly surviving) and the craters. The power of the shock and fire waves can also be evidenced by the videos released on Wednesday, which show the burned cars of the employees of the air base, parked approx. 300-400 meters from the planes, as well as the damage to the civilian infrastructure in the city. According to the maximum estimate, up to 14 out of a total of 31 aircraft may have been destroyed, Saki also had 6 helicopters.

The fate of the 43rd Regiment in Saki is tragically reminiscent of that of the Egyptian air force in the early days of the Six-Day War in 1967, when the Israeli air force destroyed hundreds of Egyptian planes on the ground and effectively grounded the army in Cairo, military historians recall. The losses of the 43rd regiment are much smaller, but it is still the largest aviation loss for the Russian army since the beginning of the war and in recent decades in general.