Bulgaria’s President: An Active Information Campaign is Needed for the Machine Vote 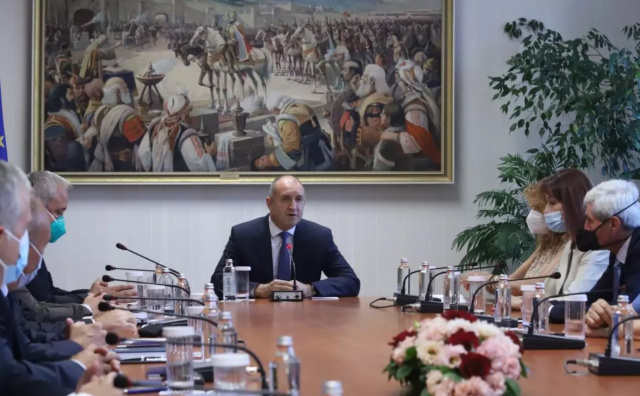 President Rumen Radev participated in a working meeting with representatives of the institutions responsible for the preparation and holding of the upcoming early parliamentary elections on October 2.

"It is of great importance for all of us that these elections produce a stable and responsible governing majority that will tackle urgent reforms and make strategic decisions for our country. It is also important that this majority enjoy high legitimacy. Which comes from high voter turnout. High voter turnout requires both an active campaign and commitment of parties and candidates for people's representatives with clear programs and messages to attract voters, as well as responsible work of the election administration and the state, giving confidence in the honesty, transparency and accessibility of the electoral process. First of all, this means increasing trust in machine voting. Machine voting has proven its effectiveness in drastically reducing the invalid vote, and the number of wrong and manipulated protocols also contributed to reducing the bought vote," President Radev said at the beginning of the meeting.

He stated that an active information campaign about machine voting is needed. According to him, a clear methodology, public and transparent actions are needed to give confidence to the parties and citizens in the absence of any manipulations with the machines at all stages of the preparation and conduct of the elections - from storing the machines to loading the software and the keys to transportation, voting, and reporting.

"An active information campaign for machine voting is also necessary, and I hope that all explanatory materials for this campaign will be prepared in time, and accordingly I hope that the media will commit to their regular broadcast," the president specified.

He recalled that the elections organized by the two caretaker governments have shown that it is possible to wage an effective war against the bought vote.

"I am confident that the fight against this unacceptable phenomenon in a democratic country will be a priority of both the current government and the law enforcement authorities," said Rumen Radev.

And this year, he expects the Ministry of Foreign Affairs, with the help of the state administration, to give every Bulgarian citizen abroad the opportunity to cast his vote.

Chairwoman of the Central Election Committee (CEC) Kamelia Neikova reported the storage of voting machines as a problem.

Another problem for the CEC is voting abroad and, more precisely, the adoption of the election protocols, so that the members of election commissions do not wait until the morning.

Caretaker Interior Minister Ivan Demerdzhiev stated that they will use all good practices to ensure the lawful conduct of the election process. The aim is to stop the new practices for distorting the vote of the voters and to present those responsible for them before the law.

“The Ministry of the Interior has created an action plan, the tasks have been distributed”, said Demerdzhiev.

The caretaker Minister of Foreign Affairs, Nikolay Milkov, stated that a working group "Elections" was created, which covers the spectrum of activities of SЕCs (Sectional Election Commission) abroad, as well as logistics. It relies on the same people from last year. Instructions have been given to foreign missions to obtain permission to hold the elections.

“There are already about a dozen consents received, but they will grow. We expect the opening of 700 to 750 sections, but the ministry is preparing to organize about 800 sections“, the foreign minister said.

He also said that an amount of over BGN 7,635,000 has been allocated for organizing and conducting the elections abroad.

Milkov believes that there will be no problems with the requested polling stations in Russia. Usually 4-5 are organized there, now there can be probably 3.

“Regarding Ukraine, we do not have an embassy, ​​but we have asked here in Bulgaria for consent through the Ukrainian embassy. We will rely on the activity of the Bulgarian community because the secondment is in the conditions of an existing military risk”. Milkov called for a quick preparation of the papers so that the delivery could be organized.

The caretaker government has already approved the costs of preparing and producing the elections.

The approved funds amount to BGN 70.5 million. The National Assembly does not vote on changes to the electoral code and voting will only be by machines in sections with over 300 voters.

Bulletins will also be printed, which will come into use if the machine fails because it cannot be replaced. Estimates indicate that about 800 will be the sections abroad, in more than 65 countries.