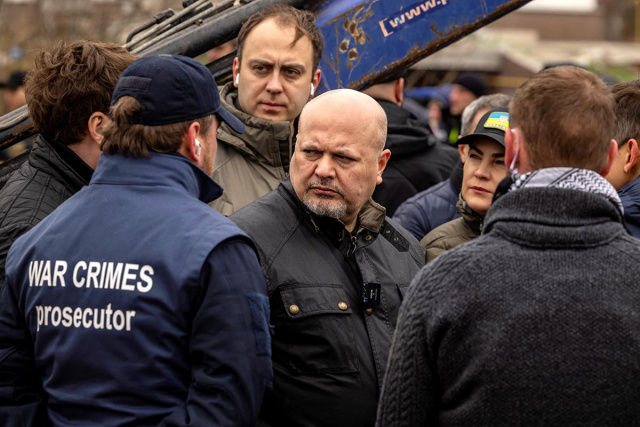 Ukraine is investigating almost 26,000 cases of alleged war crimes committed since the Russian invasion began in February and has indicted 135 people.

This was reported to Reuters by the chief war crimes prosecutor, quoted by BTA.

About 15 of the accused are in Ukrainian custody, while the remaining 120 are free, said Yuriy Bilusov, head of the war crimes department of the Prosecutor General's Office.

Thirteen cases have been filed in the courts, and seven have been sentenced, he added.

In May, a 21-year-old captured Russian soldier became the first person to be convicted of war crimes in Ukraine since Russia's February 24 invasion. He was sentenced to life in prison for killing an unarmed civilian. At the end of July, however, a Kyiv court reduced Vadim Shishimarin's sentence to 15 years in prison.

"We have sometimes been asked why we pursue such... low-ranking soldiers. It is simply because they are physically here... If the generals were here physically and we would be able to capture them, we would definitely pursue the generals," Bilousov points out.

Amnesty International apologized for its report, but did not retract its findings

Amnesty International has apologized for its report accusing Ukraine of putting civilians at risk by its military. The statement was published by Sky News and Reuters.

Amnesty said three days ago that the Ukrainian army was endangering the civilian population by setting up bases and inserting weapons into residential areas, including schools and hospitals, in an attempt to push back Russian forces. At the same time, Russia carries out indiscriminate attacks, including using munitions banned by the international community.

Human rights activists have established that units of the Armed Forces of Ukraine are based in residential buildings in 19 towns and villages in Kharkiv, Donetsk and Mykolaiv regions. Most of the residential areas where the soldiers were stationed are several kilometers from the front line.

Now the human rights organization says it "deeply regrets" that its report has sparked outrage. At the same time, Amnesty does not abandon the conclusions set out in it.

“Amnesty International's priority in this and any other conflict is to ensure the protection of the civilian population. Indeed, this was our sole aim in publishing the latest study. While we fully support our findings, we regret the pain caused,” was said in a statement.

The organization says that no actions committed by Ukrainian forces "justify violations by Russia."

"This does not mean that Amnesty International holds Ukrainian forces responsible for violations committed by Russian forces, or that the Ukrainian military is not taking adequate precautions in other parts of the country," the report said.

Representatives of human rights defenders visited 19 cities and villages in Ukraine. The organization published its findings in a report. The document was adopted by Russian propagandists, who believe that the Ukrainians are using civilians as "human shields", UNIAN reminds.

The head of the Ministry of Reintegration, Irina Vereshchuk, called Amnesty International's statement "absurd and insulting," and Ukrainian President Volodymyr Zelensky condemned the NGO for trying to amnesty Russia.

The British ambassador in Kyiv emotionally commented on Amnesty International's statement and reminded that Ukrainians are threatened by Russian missiles. And the organization's head in Ukraine, Oksana Pokalchuk, resigned, angered by the report's findings.

Zelensky: Kyiv will not cede territories to Moscow even in a referendum

In his midnight address, President Volodymyr Zelensky reiterated that Kyiv would not cede any territories to Russia and that if a referendum was held in the occupied territories, as Moscow is said to be planning, it would end the possibility of negotiations.

"There are more and more rumors that the occupiers are preparing pseudo-referendums for joining Russia in the occupied southern parts of our country. I want to say something very simple: anyone who helps the occupiers in any way will then bear their responsibility to Ukraine. Our position remains unchanged: we will not give up anything of ours, and if the occupiers continue with these pseudo-referendums, it will mean the end of the opportunities for negotiations with Ukraine and the free world, which Russia will need at some point."

After the invasion began, the two sides attempted to negotiate, but since March the dialogue has been suspended, with each side blaming the other for stalling it.

Zelensky: No one is safe while Russia is shelling Zaporizhzhia NPP

No one in the world can feel safe while Russia is shelling the Zaporizhzhia nuclear power plant, Ukrainian President Volodymyr Zelensky said in a statement.

"Today I spoke with the President of the European Council, Charles Michel. I informed him about the situation on the battlefield, about the threat that Russia has created with the strikes on the Zaporizhzhia nuclear power plant. There is no country in the world that feels safe when a terrorist country attacks a nuclear power plant. God forbid something irreparable happens - and no one will stop the wind that will blow away the radioactive contamination," the Ukrainian leader said.

Zelensky called on the international community to give a principled response to the Russian strikes on the Zaporizhzhia nuclear power plant.

The Ukrainian president stated that the situation in Donbas continues to be very difficult.

"Our army is doing everything possible to stop the Russian terror and inflict the greatest losses on the occupiers. Avdeyevka, Pesky, Marinka, Bakhmutskoye and other hotspots in the Donetsk region are taking a lot of our efforts and, unfortunately, a lot of human lives”, said Zelensky.

Two more ships loaded with grain left the Ukrainian ports of Yuzhny and Chornomorsk this morning. This is happening within the framework of the agreement on securing an export corridor reached in Istanbul on July 22, the Turkish Defense Ministry said, as quoted by the Anadolu Agency. It was signed by representatives of the belligerents Ukraine and Russia and the mediators of the agreement - the UN and Turkey.

The ship "Sakura", which was carrying 11,000 tons of soybeans to Italy, departed from the port of Yuzhny, and the ship "Arizona", loaded with 48,458 tons of corn for the Turkish port of Iskenderun, departed from Chornomorsk.

Four more ships, which left Ukraine yesterday, are continuing their course to Istanbul, where the Joint Coordination Center established under the agreement is based. They are expected to drop anchor off the Turkish coast tonight and be inspected tomorrow.