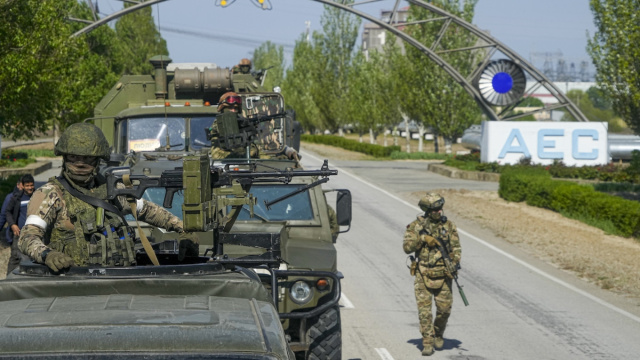 Russia is trying a broad front attack, rocket fire in the regions of Kharkiv and Dnipropetrovsk

Russia is trying to carry out a large-scale attack on a wide front in Ukraine, and rockets have been fired at populated areas in the regions of Kharkiv and Dnipropetrovsk. Dnipropetrovsk region is again under fire from cities and hurricanes. Two people were injured as a result of the enemy strikes in Markhanets, the chairman of the Dnipropetrovsk regional military administration, Valentin Reznichenko, announced on Telegram. "One night with one alarm and four shellings. It was hot again in two regions - Nikopol and Kryvyi Rih (the hometown of President Zelensky). The Russian army fired 60 Grad shells to the Nikopol region. Two people were injured in Marganets. A 64-year-old man with wounds is in hospital. Nearly 50 private houses, several cars and a bus stop were damaged in the city. The shelling affected a gas pipeline and an electrical network. Several thousand residents of Margan are without electricity. Electricians are working on the site. The municipality Chervenogrivko has no victims or damage," he reported.

On the morning of August 7, the occupiers shelled two Kharkiv districts with rockets, the Mayor of Kharkiv Igor Terekhov reported, also on Telegram. "Around 04:40 a.m., Kharkiv was shelled again. A series of explosions. According to preliminary data, the Novobavarsky and Nemyshlyansky regions were shelled. They were shelled with rockets," he reports. Information about victims and destruction is being clarified.

On August 6, 2022, the Russian occupiers tried to break through the defenses of the Ukrainian forces in the direction of Spartak - Avdeevka, Veseloe - Pesky and a number of other settlements, but the Ukrainian soldiers inflicted significant losses on them and repulsed them, according to the data of the Ukrainian military command.

"The situation in the Volyn and Poles directions did not change. The threat of enemy missile and air strikes from the territory and airspace of Belarus continued to exist.

In the Seversky direction, the enemy carried out artillery attacks near Yanzhulovka, Nikolaevka and the Iron Bridge in Chernihiv region, as well as near Nova Huta in Sumy region," the military summary reads.

Russia is not conducting active offensive operations in the direction of Kharkiv. It used artillery with guns and rockets to shell the areas of Prudyanka, Duvanka, Zolochiv and 27 other settlements. Airstrikes were carried out in the vicinity of Verkhnyaya Saltov, Lebyazhie and Khusarovka.

The fighting in Donetsk

In the direction of Sloviansk, Russia is firing barrel and rocket artillery. Some enemy units tried to advance to the western outskirts of Bogorodichnoye, but failed and retreated, the Ukrainian military reported. Here's the rest of the roundup for the day:

In the direction of Avdiyvka, the enemy barrel and rocket artillery bombarded the areas of Avdiyvka, Peski, Nitalovi, Nevelski and New York. Attack aircraft of the occupier operate near New York, Krasnogorovka, Pisky and Marinka.

With offensive actions, the Russian invaders tried to break through the defenses of our troops along the directions Spartak - Avdeevka, Veseloe - Peski, Novoselovka II, Krasnogorovka, Aleksandrovka - Marinka, Kirilovka - Pavlovka and Prechistovka - Novomayorskoe. Ukrainian soldiers inflicted significant losses on the enemy and repulsed him.

The occupiers engaged the army aviation to carry out strikes in the area of ​​Andreevka; active aerial reconnaissance of the area by unmanned aerial vehicles."

Four sea-based cruise missile carriers are on standby in the Black Sea.

Parts of the Zaporizhzhia NPP in Ukraine were damaged

Parts of Ukraine's Zaporizhzhia nuclear power plant were "severely damaged" by military strikes that forced one of its reactors to shut down, the plant's operator said on Saturday.

Kyiv and Moscow blamed each other for the attacks. The strikes damaged a power cable, forced one of the reactors to shut down, and "there are still risks of hydrogen and radioactive leaks, and the risk of fire is also high," it said. The shelling "caused a serious risk to the safe operation of the plant".

Russian troops have occupied the plant in Zaporizhzhia since the early days of their invasion, and Kyiv has accused them of storing heavy weapons there. But Moscow in turn accused Ukrainian forces of attacking the plant.

The European Union blamed Russia on Saturday for the shelling. "The EU condemns Russia's military activities around the #Zaporizhzhia nuclear power plant," the bloc's top diplomat, Josep Borrell, tweeted. "This is a serious and irresponsible violation of nuclear safety rules and another example of Russia's disregard for international norms." Borrell insisted that the UN's nuclear agency, the International Atomic Energy Agency, be given access to the plant.

The IAEA has been trying for weeks to send a team to inspect the plant. Ukraine has so far rejected the efforts, which it says will legitimize the Russian occupation of the site in the eyes of the international community.

The statement also said that employees of the Russian nuclear operator Rosatom left the plant shortly before the attacks, but Ukrainian personnel remained and the plant was still producing electricity.

Ukrainian President Volodymyr Zelensky said on Friday that "any bombing of this site is a shameless crime, an act of terror." And the Ukrainian Foreign Ministry said that "the possible consequences of a strike on a working reactor are equivalent to the use of an atomic bomb." Earlier in the week, the IAEA said the situation at the nuclear power plant was "unstable". "Every safety principle has been violated in one way or another," said IAEA chief Rafael Grossi.

One of the vessels left from Odessa, three - from Chornomorsk. The ships will drop anchor north of Istanbul and undergo an inspection by the Joint Coordination Center, the Turkish Defense Ministry said in a statement.

The export of Ukrainian grain from the Black Sea ports takes place within the framework of the agreement signed on July 22 in Istanbul by representatives of Russia, Ukraine, Turkey and the United Nations. It defines the procedure for the safe exit of commercial vessels from the Black Sea ports under the control of Ukraine along specially created maritime humanitarian corridors.

The first ship with Ukrainian grain left Odesa on the morning of August 1. Authorities in Kyiv expect exports to increase to 3 million tons per month.