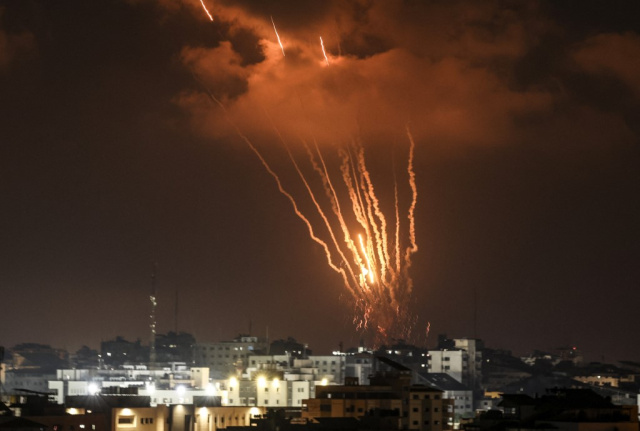 Israel killed Tayseer Jabari, a senior commander of the Palestinian Islamic Jihad group (PIJ) in the Gaza Strip during an air strike Friday as Israeli leaders said that the actions were necessary after the group refused to back down from its intentions to carry out attacks against the country, media reports said.

Under this Israeli Operation "Breaking Dawn" six sites were hit by fighter jets and armed drones. What actually led to the conflict?

As per media reports, the Islamic Jihad Group had been threatening the Israeli Defence Forces since Tuesday to attack in response to the arrest of its West Bank leader, Baha Abu al-Ata. al-Ata was assassinated by Israel in 2019.

Israeli officials indicated that the operation was targeting the PIJ specifically, hoping to keep Hamas largely out of the conflict as it did during a flare-up after Abu al-Ata's killing, reported the Times of Israel.

The Israeli Defence Forces spokesman Ron Kochav while speaking with a media outlet said that the operation was "a targeted campaign against the Palestinian Islamic Jihad."

He also confirmed that the Israeli army was trying not to drag Hamas into the ongoing conflict and is hoping to keep the campaign limited in scope.

A senior military official said Islamic Jihad had been preparing a major terror attack against Israeli civilians, with Jabari and many of his fighters planning to attack civilians near the border, the official said.

The military said it had deployed the Iron Dome air defense system near Tel Aviv, Jerusalem and Beersheba, as it anticipated retaliation from Islamic Jihad in the form of rocket attacks. The military said a "special situation" had been declared on the homefront, up to 80 kilometers from Gaza -- an area extending as far north as Tel Aviv.

A "special situation" is a legal term used in times of emergency, granting authorities greater jurisdiction over the civilian population in order to streamline efforts to safeguard the population.

The IDF meanwhile began to call up reservists to bolster its Southern Command, Home Front Command, air defense array and combat troops in the event of further escalation. Gantz approved calling up as many as 25,000 reservist troops, his office said.

Over 70 rockets fired at Israel in 2 hrs, 9 fell in Gaza Strip: Israeli Army

More than 70 rockets were fired at Israeli territory in two hours, 9 of which fell in the Gaza Strip, the Israel Defense Forces said.

"In just 2 hours tonight: 71 rockets were fired from Gaza toward Israel. 9 of these rockets fell INSIDE the Gaza Strip. Terrorist rockets threaten innocent civilians--both Israeli and Gazan," the IDF said on Twitter. Earlier, the army said that air raid sirens sounded in the south and in the center of the country, including in the cities of Ashkelon and Ashdod.