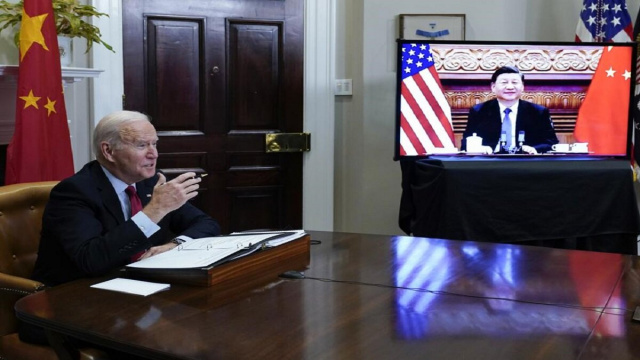 US President Joe Biden agreed to meet "face to face" with his Chinese counterpart Xi Jinping in near future, as decided during the fifth phone call between the two leaders on Thursday, a senior White House administration official said.

The phone call comes amid heightened tensions between the geopolitical rivals with Beijing issuing warnings against the US House of Representatives Speaker Nancy Pelosi's scheduled visit to Taiwan in August. Addressing a media briefing, House Press Secretary Karine Jean-Pierre said, "The conversation was substantive, it was in-depth, and it was candid."

"President Biden has continually emphasized the importance of maintaining open lines of communication to ensure that the United States and China manage our differences and work together on areas of shared interest. This call was part of our ongoing efforts to do that," she added.

"They also discussed the value of meeting face-to-face and agreed to have their teams follow up to find a mutually agreeable time to do so," the statement added.

US President noted that US-China cooperation benefits not only the two peoples but also people of all countries.

The official further said that it is important for the United States and China to work together on areas where our interests align, even when we have substantial differences or are engaged in competition in a number of different areas.

"But this is what responsible nations do. They manage areas where they have differences, and they find ways to work together for the good of their own people and for the common good of the people of the world", she added.

The official further revealed that during the phone call, the two leaders held a detailed discussion of areas where the two countries can work together, with a particular focus on climate change and health security, as well as counternarcotics.

Biden also raised the need to resolve the cases of American citizens who are wrongfully detained or subject to exit bans in China, as well as longstanding concerns about human rights.

"The two leaders had an in-depth discussion about Taiwan. President Biden reaffirmed the United States' commitment to our One China Policy, guided by the Taiwan Relations Act, the Three Joint Communiques, and the Six Assurances." Jean-Pierre said.

Biden underscored to President Xi the United States opposition to unilateral changes to the status quo by either side and commitment to the maintenance of peace and stability across the Taiwan Strait.

"He reiterated that the one-China policy of the US has not changed and will not change and that the US does not support "Taiwan independence", Jean-Pierre added.

On contrary, Chinese President Xi Jinping warned Biden, not to "play with fire" over Taiwan and asked the US to abide by the One China principle.

"Those who play with fire will perish by it. It is hoped that the US will be clear-eyed about this. The US should honor the one-China principle and implement the three joint communique both in word and in deed."

Xi stressed that both sides of the Taiwan Strait belong to one and the same China and that China firmly opposes separatist moves toward "Taiwan independence".

He said that the US should abide by the one-China principle, which is the political foundation for China-US relations, an official statement from the Chinese Foreign Affairs Ministry quoted Xi.

"China firmly opposes separatist moves toward 'Taiwan independence' and interference by external forces, and never allows any room for 'Taiwan independence' forces in whatever form", Xi said, adding, "the position of the Chinese government and people on the Taiwan question is consistent, and resolutely safeguarding China's national sovereignty and territorial integrity is the firm will of the more than 1.4 billion Chinese people."

The phone call between the two leaders comes after their conversation on March 18 and a series of conversations between high-level US and PRC officials.

Xi Jinping held the phone conversation with Biden at the request of the latter. This was the second talk since they had a video call in March.

US House Speaker Nancy Pelosi is considering a trip to Taiwan during the congressional recess in August that would make her the highest-ranking American politician since 1997 to visit the island.

Even the US President cast doubt on Pelosi's trip to Taiwan. Biden said the US military believes it is not a good idea for Pelosi to travel to Taiwan as planned.

"The military thinks it's not a good idea right now," Biden said on Wednesday as quoted by the White House press pool.

China has warned of "resolute countermeasures" if Pelosi proceeds with crossing its "red line."