Day 155 of the Invasion of Ukraine: Kyiv’s Counter-Offensive towards Kherson is gaining Momentum 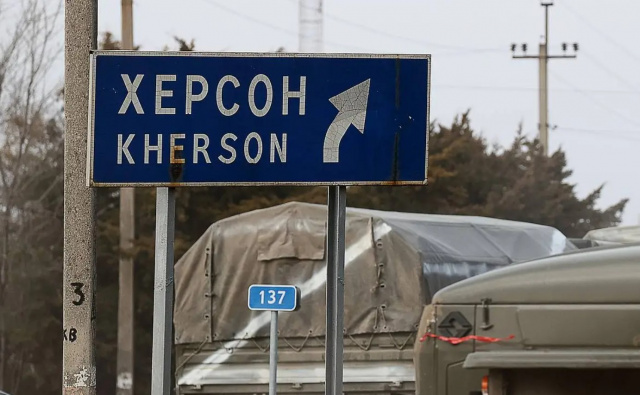 Kyiv has confirmed that the Russians have captured the Uglegorsk TPP

Moscow said yesterday that its units had taken over the Soviet-era Uglegorsk coal-fired power plant and that it remained intact.

"They made a small tactical advance, they captured Uglegorsk," Oleksiy Arestovich confirmed in an interview published on YouTube.

The presidential adviser added that the redeployment of Russian forces appears to be a change in tactics and that they are likely moving from a strategic offensive to a strategic defensive one.

Arestovych and another Ukrainian official indicated that Russia was sending forces to Melitopol, Zaporizhzhia and Kherson regions.

Yesterday, Ukraine shelled the key "Antonovsky" bridge, which crosses the Dnieper River in the Kherson region.

The Ukrainian counter-offensive towards Kherson is gathering momentum

It comes after the closure of a vital bridge near Kherson, which has been hit by three Ukrainian strikes in the past two weeks (including by the US HIMARS rocket launcher system) and attacks on other Dnieper bridges in the area.

For thousands of Russian soldiers, there is a risk of being cut off from the rest of the Kherson region. Kyiv has promised to retake the city by September.

According to the BBC's military sources, Kherson is the closest Russia has politically to a "pearl in the crown of occupation". Therefore, the loss "would seriously undermine Russia's attempts to present the occupation as a success." For them, the attack is part of a campaign to isolate Russian forces with the ultimate goal of recapturing Kherson.

The Secretary of the National Security Council of Ukraine Oleksiy Danilov said yesterday that Moscow is moving the maximum number of forces in the direction of Kherson.

"We will gradually make Ukraine one of the guarantors of European energy security, thanks to our domestic electricity production," he said in his daily video address. "Despite the war, we ensured the integration between the Ukrainian and European networks in record time," the president added.

His statement came a day after EU member states reached an agreement to reduce gas consumption to help Germany after a drastic cut in Russian supplies of the blue fuel. Kyiv and the Europeans accuse Moscow of using gas as an economic and political weapon.

US Secretary of State Antony Blinken on Wednesday said that he will speak with his Russian counterpart Sergey Lavrov in a phone call in the coming days and pressed him to respond to an offer Washington has made to secure the release of American citizens detained by Moscow.

Speaking at a news conference at the State Department, Blinken said, "in the coming days, I expect to speak with Russian FM Sergey Lavrov for the first time since the war (in Ukraine) began and address the release of Brittney Griner & Paul Whelan . We gave a substantial proposal weeks ago to facilitate their release." Blinken said the United States had communicated a "substantial offer" to Moscow in order to bring home basketball star Brittney Griner and former US Marine Paul Whelan, although he declined to disclose what the deal would entail.

"We put a substantial proposal on the table weeks ago to facilitate their release," said Blinken.

The statement marked the first time the US government has publicly revealed any concrete action it has taken to secure the release of Griner, who was arrested on drug-related charges at a Moscow airport in February and testified Wednesday at her trial.

As per reports, the Biden administration has proposed returning convicted arms merchant Viktor Bout to Russia in exchange for the release of detained Americans Brittney Griner and Paul Whelan, reported New York Post.

"We communicated a substantial offer that we believe could be successful based on a history of conversations with the Russians," a senior administration official told CNN. "We communicated that a number of weeks ago, in June."

Bout, known as the "Merchant of Death," is serving 25 years in a US prison after he was convicted in 2011 of conspiracy to kill Americans, providing aid to a terrorist organization, and other charges.

According to CNN, President Biden has come around to supporting the exchange for Bout after months of internal debate, overriding opposition by the Justice Department.

The official said it was up to Russia to respond to the proposed swap, "yet at the same time that does not leave us passive, as we continue to communicate the offer at very senior levels."

Meanwhile, Blinken underlined that the phone call "in the coming days" with Foreign Minister Sergey Lavrov "will not be a negotiation about Ukraine."

He also talked about the grain deal that was signed in Istanbul, saying that Russia must honor the deal it struck with the UN, Turkey, and Ukraine to be able to allow the export of Ukrainian grain via the Black Sea.

Blinken said that the Ukraine war has weakened Russia profoundly.

"Moscow is cherry-picking economic data to support insistence that everything is fine when this is simply not true," he said.

He also said that Moscow is laying the groundwork to add more Ukrainian territory.

"Annexation by force is a gross violation of the UN charter," he added.