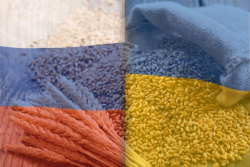 Are the two separate agreements signed in Istanbul last Friday by Russia and Ukraine with the United Nations and Turkey that pave the way for the export of 22 million of Ukrainian grain which remained blockaded in three Black Sea ports, as well as the export of Russian grain and fertilizer, really a "beacon of hope" for millions of starving people, or just an illusory dream? Millions of people in the world's poorer nations that face an imminent danger of starvation breathed a sigh of relief on hearing the news that these desperately needed quantities of grain will reach the market and grain prices may become affordable once again.

However, less than 24 hours later Russian missiles hit targets in the port of Odessa, raising questions about whether the deal will be implemented.

In the wake of Russia's invasion of Ukraine, there was a de facto blockade by Moscow of ports in the Black Sea, while Ukraine mined the waters to deter a Russian amphibious attack.

As a result, the ports used to export Ukrainian grain were blocked for commercial shipping and, as Ukraine is a major grain exporter, prices of this essential commodity surged, becoming unaffordable for millions of poor people facing acute hunger.

As both Ukraine and Russia are among the largest exporters of grain in the world, the blockade has caused grain prices to soar. Ukraine could not export its grain and other agricultural produce due to the blockade, while international shippers and insurers were reluctant to conclude contracts with Russians in case they run afoul of US and EU sanctions.

Following diplomatic efforts by the United Nations and Turkey lasting more than two months, an agreement was reached that port facilities and vessels would be safeguarded from hostilities.

Vessels carrying grain will be steered by Ukrainian captains out of the ports of Odessa, Chornomork and Yuzhne and sail to Istanbul and deliver their cargo to other ships to be transported to countries importing grain.

A joint command center manned by officials from the UN, Ukraine, Russia and Turkey will monitor the movement of these ships and will make sure that they do not transport weapons or soldiers.

As the two warring nations refuse to sign any deal with each other, two identical agreements were signed at separate tables. One by the Russian Defense Minister Sergey Shoigu and the other by the Ukrainian Minister of Infrastructure Alexander Kubrakov. The other signatories were the UN Secretary-General Antonio Guterres and Turkey's Defense Minister Hulusi Akar. Turkish President Recep Tayyip Erdogan who played an active role in the negotiations for the deal was present at the signing.

Speaking during the signing ceremony, UN Secretary-General Antonio Guterres described the agreement reached as "a beacon of hope, a beacon of possibility, a beacon of relief in a world that needs it more than ever."

Guterres added: "Since the war started, I have been highlighting that there is no solution to the global food crisis without ensuring full global access to Ukraine's food products and Russian food and fertilizer."

The deal will make available more wheat, sunflower oil and fertilizer in international markets, and for humanitarian needs. The target is to reach the pre-war level of five million metric tonnes of grain exported each month.

Robert Martini, Red Cross Director-General, after pointing out that in recent months' prices for food had risen 187 percent in Sudan, 86 percent in Syria and 60 percent in Yemen described the deal as "nothing short of lifesaving for people across the world who are struggling to feed their families."

The Ukrainian side was much more reserved in its reaction to the deal. Foreign Minister Dmytro Kuleba characteristically said: "I'm not opening a bottle of champagne because of this deal. I will keep my fingers crossed that this will work, that ships will carry grain to world markets and prices will go down and people will have food to eat. But I'm very cautious because I have no trust in Russia."

Sergei Shoigu, Russian Defense Minister said: "Russia has taken on the obligations that are clearly spelled out in this document. We will not take advantage of the fact that the ports will be cleared and opened. We have made this commitment."

The US facilitated the deal, when it removed a major obstacle to Russian food and fertilizer exports, as banks, shipping and insurance companies were very reluctant to engage in transactions in Russian grain and fertilizer exports, fearing they would be deemed to violate US sanctions. Washington gave the assurance that such exports would not constitute a breach of US sanctions on Russia.

It is remarkable that the US State Department did not issue a statement hailing the agreement, however, some Biden administration officials expressed doubts if Russia would allow safe passage of ships through the Black Sea.

Less than a day after the signing of the deal, Russia fired a number of rockets against the port of Odessa, but it is not clear if the strikes were targeting grain infrastructure. Russia may not have violated the agreement it signed, as the deal does not cover military targets in the ports.

Reacting to the attack, a spokesman of the Ukrainian Foreign Ministry said: "President Vladimir Putin of Russia had 'spit in the face' of the United Nations Secretary-General, Antonio Guterres, and President Recep Tayyip Erdogan of Turkey after the two expended enormous effort to reach this agreement."

The United Nations, the European Union, the United States, Britain, Germany and Italy strongly condemned the strikes in Odesa.

So, it remains to be seen if the agreement will be implemented and help avert famine in poor countries or will be scuttled and will prove to be just an illusory dream.